The shy youngster is endangered in the wild, but its clever camouflage of stripes and spots keeps it safe from predators.
By Peter Barker November 9, 2021
Facebook
Twitter
Linkedin
Email 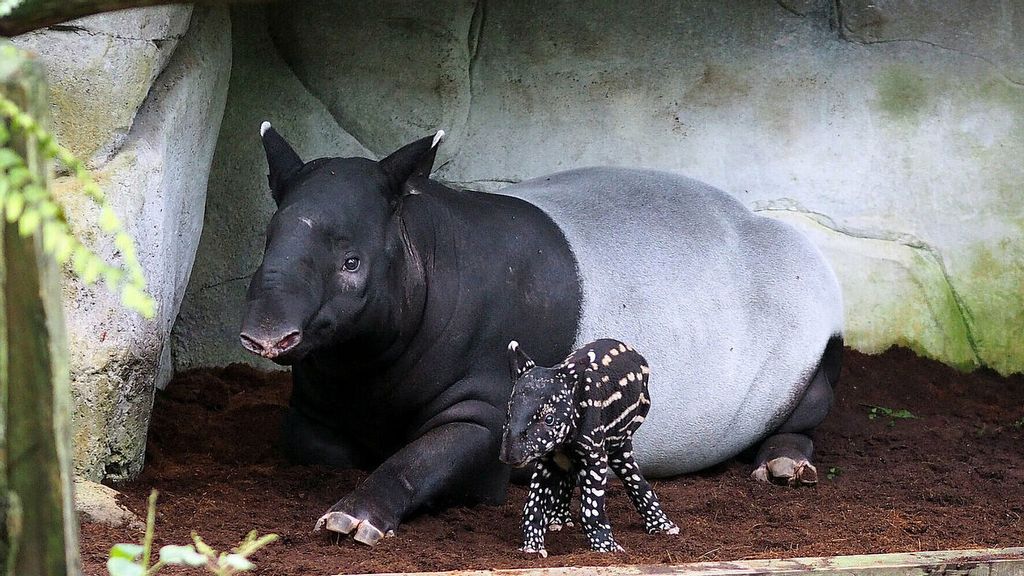 A Malayan tapir was born in the Leipzig Zoo in Germany on Nov. 5.  (Zoo Leipzig/Zenger)

A newborn endangered Malayan tapir calf was captured on video observing its new home while sticking close to its mother in a German zoo.

“Laila is a very experienced mother who has already given birth to several young animals and accordingly takes care of them,” the zoo said.

The Malayan tapir is the largest of the four tapir species. The calf can stand a few hours after birth and weighs 15 to 22 pounds. A grown tapir can weigh 550–720 pounds.

In the wild, they are found in the rainforests of Southeast Asia, more specifically in Sumatra in Indonesia, the Malaysian Peninsula, Myanmar and Thailand.

The International Union for Conservation of Nature considers the Malayan tapir to be endangered, which means the species is likely to become extinct in the near future. That’s due to large-scale habitat loss, caused by agricultural development, cattle grazing and logging, as well as a low birth rate.

However, the Leipzig Zoo has been successful in breeding and rearing the endangered species. In the last decade, three Malayan tapirs, named Baru, Kedua and Ketiga, were born at the zoo and later reintroduced into the wild as part of a conservation program.

The gestation period of the Malayan tapir is around 390 days, and mothers give birth to one calf at a time. They have been known to live for over 30 years.

Tapirs are herbivores; they eat vegetation, such as leaves and fruit. About the size of a donkey, they graze together in groups, called a candle.

The first few days of the offspring’s life will be critical, especially as the last two born to Laila did not survive to adulthood. Ariel Jacken, the senior curator at the zoo, said: “We sincerely hope we will have more luck this time and the youngster can make it all the way to adulthood.”

The father is Laila’s long-term partner Copasih, 13. But Laila, 12, will take center stage in the little one’s early life.

In the video, the baby does not venture far from its mother.

The most important thing is to give the mother and newborn time to rest, relax and spend time together to develop their mother-child bond, according to the zoo. The baby is born with stripes and spots, which is good for camouflage. The markings fade as they age.

As Laila gave birth in an outdoor enclosure, the two are being allowed to roam freely between indoor and outdoor habitats. This gives visitors an opportunity to see them outside, as well as more freedom for the mother-and-son duo.