SpaceX Crew-2 stayed aboard station for 199 days — and more than 3,000 orbits around the Earth.
By Lee Bullen November 9, 2021
Facebook
Twitter
Linkedin
Email 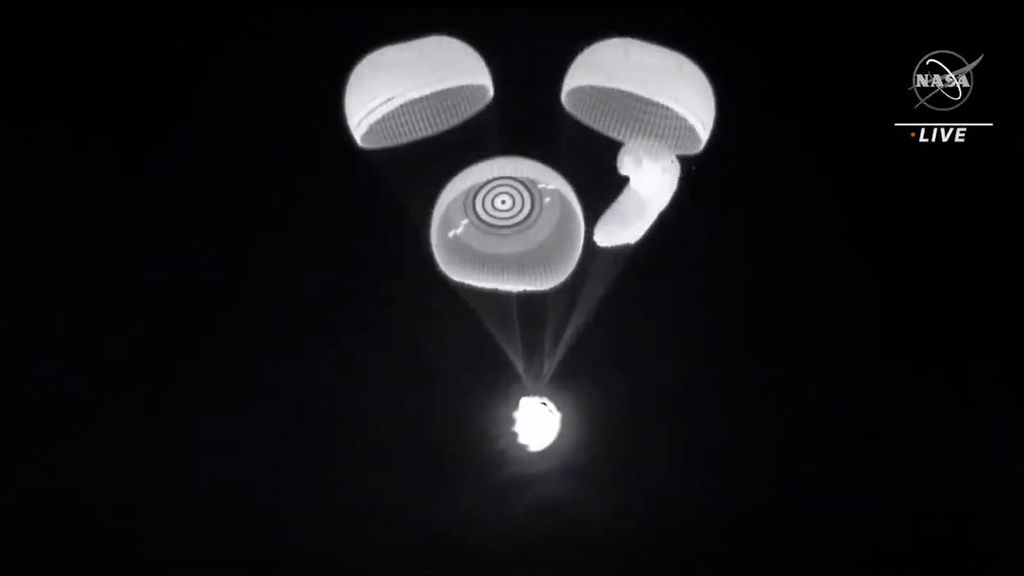 NASA’s SpaceX opens its parachutes as it descends to Earth on Nov. 8. The capsule carried four astronauts that set a record for the longest spaceflight by a U.S.-crewed spacecraft. (NASA/Zenger)

Four astronauts are back on earth after carrying out the longest stay on the International Space Station by a U.S.-crewed spacecraft.

The quartet — one from the European Space Agency, two from NASA and one from the Japan Aerospace Exploration Agency — returned to Earth on Nov. 8 aboard the SpaceX Crew Dragon Endeavour spacecraft in the Gulf of Mexico near Pensacola, Florida. After splashing down, the capsule was hoisted onto the deck of the SpaceX GO Navigator recovery ship.

The mission by NASA’s SpaceX Crew-2 was the longest spaceflight by a U.S.-crewed spacecraft at 199 days in orbit aboard the space station, beating the previous record of 168 days by the SpaceX Crew-1 operation earlier in 2021. (The longest stay in space by an individual was recorded by Russian cosmonaut Valeri Polyakov, who spent 437 days on the Mir Space Station in 1994–95. For the U.S., the record holder for the longest stay in a single mission is Scott Kelly, at 340 days.)

NASA is “happy to have Shane, Megan, Aki, and Thomas safely back on Earth after another successful, record-setting long-duration mission to the International Space Station,” said NASA Administrator Bill Nelson. “Congratulations to the teams at NASA and SpaceX who worked so hard to ensure their successful splashdown.”

This mission by the SpaceX Crew-2 marks the third time the SpaceX Crew Dragon spacecraft has transported a crew rotation of astronauts to the station as part of NASA’s Commercial Crew Program, which NASA said has proven effective at providing safe transport to the space station for experts to carry out important science work and maintenance.

“Crew-2 astronauts contributed to a host of science and maintenance activities, scientific investigations, and technology demonstrations,” including four spacewalks, NASA said. “They also studied how gaseous flames behave in microgravity, grew hatch green chiles in the station’s Plant Habitat Facility, installed free-flying robotic assistants, and even donned virtual reality goggles to test new methods of exercising in space, among many other scientific activities.”

The team headed to space on April 23 atop the Falcon 9 launch vehicle at the Kennedy Space Center in Cape Canaveral, Florida. During their time in space, the team traveled 84,653,119 statute miles during their mission, stayed 198 days on the space station, and completed 3,194 orbits around Earth.

The Crew-2 splashdown happened days ahead of the launch of the SpaceX Crew-3 mission, which scheduled for Nov. 10 and expected to last six months.

“The next NASA and SpaceX crew rotation mission is Crew-4, currently targeted for launch in April 2022. Crew-3 astronauts are scheduled to return to Earth shortly after welcoming their Crew-4 colleagues to the orbiting laboratory,” NASA said.