Wheelchair-bound gunman tried to break out before a court appearance but was shot after grabbing a guard’s gun. 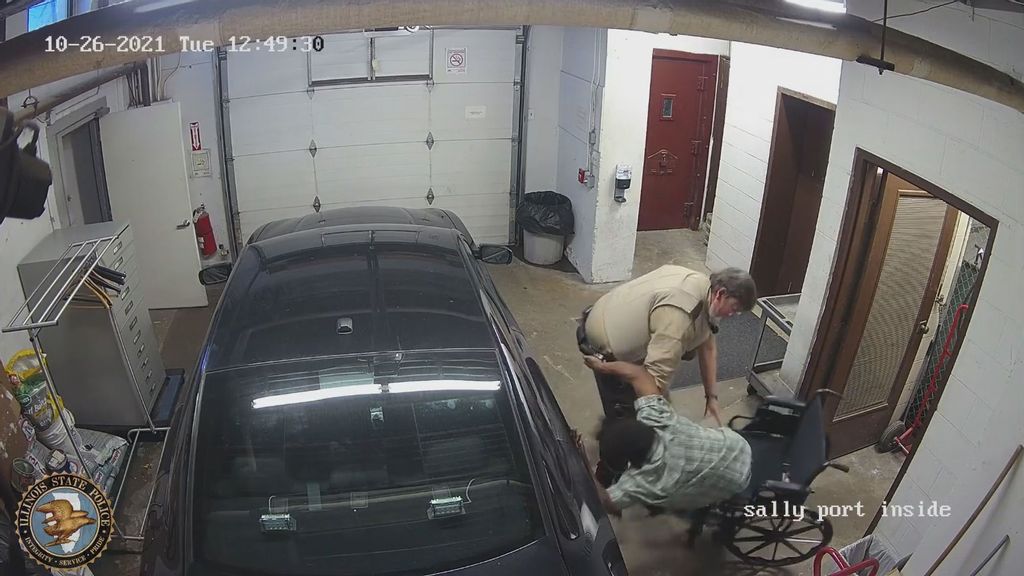 Lunging from his wheelchair, an Illinois inmate disarmed a correctional officer at a courthouse before another officer arrived on the scene and shot the suspect. (Illinois State Police District 13 DuQuoin/Zenger)

An inmate in a wheelchair was shot while trying to escape authorities while on his way to a courthouse to face trial for robbery. After first successfully wrestling a gun away from a guard, the suspect — identified by authorities as Frederick Goss — was shot by another guard, who witnessed the attempted escape on a security camera in a nearby room and rushed to his colleague’s aid.

The Illinois State Police released footage of the altercation, along with a description of the events, which took place at the Jefferson County Courthouse in Mt. Vernon, Illinois, on Oct. 29.

“Preliminary information indicates a Jefferson County Sheriff’s Office correctional officer was transporting Fredrick Goss, a 55-year-old male inmate, to the courtroom for a jury trial for allegedly robbing a gas station. While in the courthouse’s sally port [a secure, controlled entryway], Goss was un-handcuffed by the correctional officer, as Goss was not to appear before the jury in restraints,” police said in the statement.

“A Jefferson County Sheriffs’ Deputy assigned to courthouse security observed the incident on the sally port’s surveillance camera and went to the sally port to aid the officer. The deputy discharged his firearm, striking Goss.”

Goss was subsequently transferred to a nearby hospital in the St. Louis area for treatment. Details on his condition were not immediately available.

The Illinois State police said an investigation into the incident is being conducted by the Jefferson County State’s Attorney Office.

Problems in such sally ports is just one of several security issues facing many courthouses. A study on that topic undertaken by Fentress Corp., facility planning and assessment company, found that the three most common security risks in court facilities are:

“As a general rule, the optimal solutions [for such shortcomings] will be a combination of the use of law enforcement staff, architectural design and electronic controls,” wrote company founder and president Keith Fentress.