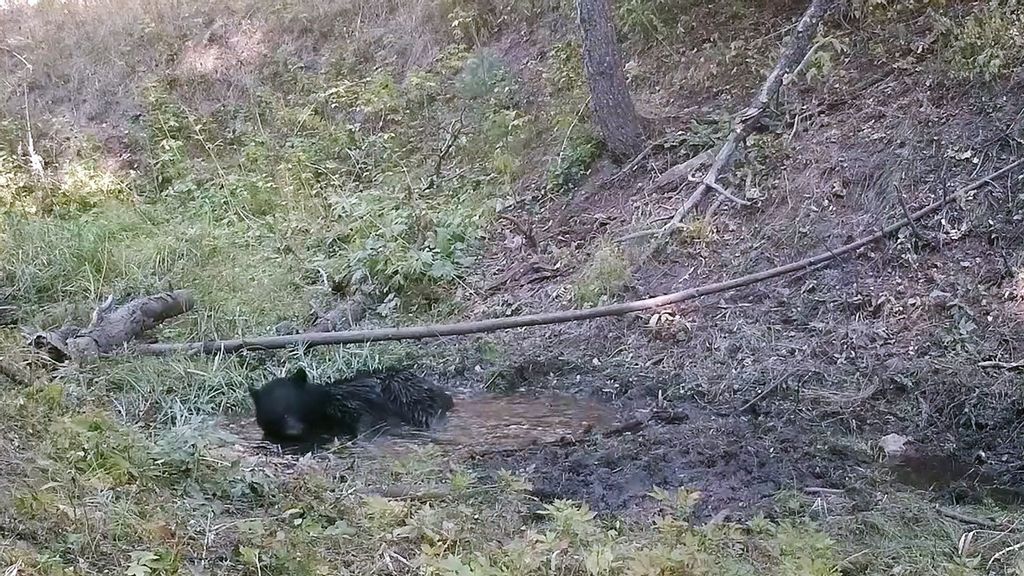 A bear finds a little water in a Colorado forest and cools off. (Colorado Parks and Wildlife/Zenger)

A small bear in Colorado took a bath in a large puddle in the woods — to the delight of viewers.

The footage was shared online Nov. 7 by the Colorado Parks and Wildlife North-East Region, which said: “A bear finds a little water in the forest to cool off in.”

The bear rolls around in the muddy water before rinsing itself.

North American brown bears are beginning their hibernation period, which runs from late October to mid-November and lasts until March or April. Hibernation requires considerable amounts of food. The huge intake is to ensure bears can put on enough fat to survive sleeping through the cold winter months before they emerge in spring.

The U.S. National Park Service says on its website: “Bears spend the winter hibernating in dens to avoid the cold weather and lack of abundant food sources. During their winter slumber, bears’ bodies drop in body temperature, pulse rate and respiration. Their bodies use the fat they stored in the summer as energy.”

It is unclear why this particular bear is not yet hibernating, but Colorado parks officials have been warning people there are still some bears out there.

In a post on Twitter, featuring a bear wandering around a suburban neighborhood at night, the agency said: “Bears are still active. Do not give them a reason to visit your house or neighborhood by leaving trash unsecured, having bird feeders out, garages left open or other food sources they can access.”

Colorado Parks and Wildlife warns on its website: “Today, bears share space with a rapidly growing human population. Black bears are curious, intelligent and very resourceful; they will explore all possible food sources. If they find food near homes, campgrounds, vehicles or communities, they’ll come back for more.”

The agency encourages people to be “Bear Aware,” to avoid inviting or provoking aggressive behavior that may result in a bear’s death.

“Bears will work hard to get the calories they need, and can easily damage property, vehicles and homes. Bears that become aggressive in their pursuit of an easy meal must often be destroyed.

“Every time we’re forced to destroy a bear, it’s not just the bear that loses. We all lose a little piece of the wildness that makes Colorado so special.”

The solitary black bear is generally smaller and darker than the brown grizzly bear, but size can vary between regions and seasons. To tell them apart, black bears have longer and more pointed ears, while grizzlies have much larger claws.