To Save The Planet, Try Stopping The Scare Tactics

Positive sustainability is all about encouraging people to do what they can without ruining their lives. And it works.
By Naama Barak November 8, 2021
Facebook
Twitter
Linkedin
Email 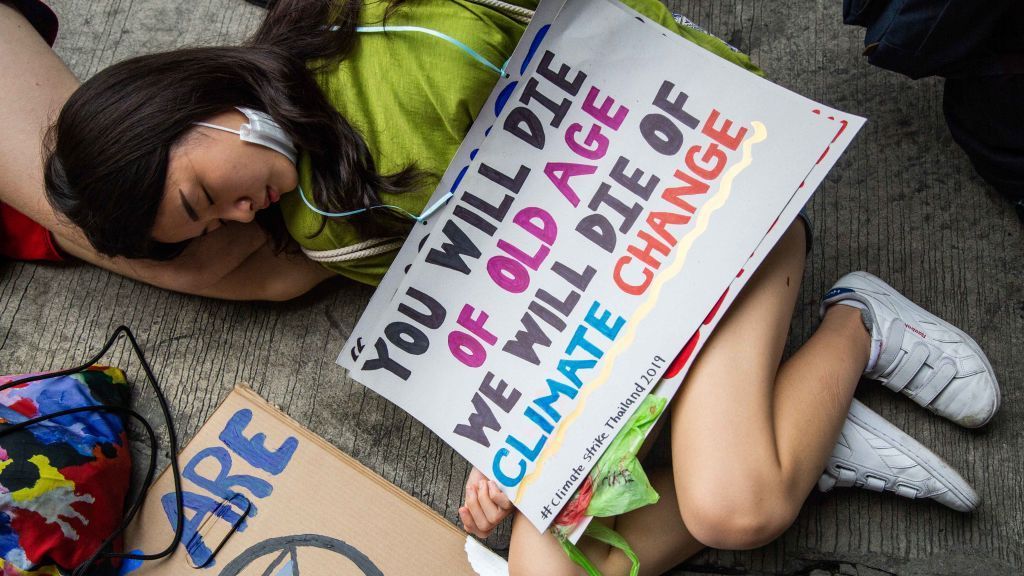 People in Bangkok, Thailand, take part in a die-in, lying on the ground and pretending to die, symbolizing the impact of climate change, in front of the Ministry of Natural Resources and Environment on Sept. 20, 2019. Hundreds participated in a global day to demand action on climate change. The movement was inspired by Swedish teenager and climate activist, Greta Thunberg. (Lauren DeCicca/Getty Images)

“For years, the whole issue of sustainability really deterred me. Because I’m not going to walk around in cloth shoes, start traveling by bus or give up my washing machine,” says Tammie Ronen.

“But every one of us can choose what and how much they’d like to do. Once I don’t have to do absolutely everything, it means that I don’t have to become a strange creature who hugs trees. Instead, I’m very active. I don’t litter, I recycle, I don’t use single-use plastics and I try using products that are more environment-friendly,” she said.

This, in a nutshell, is the basis of the emerging field of positive sustainability. Ronen, a senior professor at Tel Aviv University, is researching this with her colleague Dorit Kerret.

Ronen comes from the field of positive psychology, and until recently was head of TAU’s social sciences faculty.

Kerret comes from the field of public policy, where she specializes in law, environment studies and public health. The two joined forces when they realized that their respective fields could bring to the fore an innovative approach to positive sustainability.

Good for us and the Earth

This is because our personal wellbeing often correlates to the wellbeing of the environment.

“Let’s say that I want to buy clothes. I might think that I’ll be much better off buying loads of clothes and stuffing my wardrobe, but there’s also lots of disadvantages to this in terms of my wellbeing. While it does provide a spike in happiness, it then brings me down, because it requires money, time, closet space and a lot of other things that are less good for me,” she said.

An alternative and greener course of action could be to attend a clothes-swapping party.

“Each person brings their own clothes — which are pretty and in good condition — and you meet at a social event and swap things. It’s good for the environment, and it’s good for you because in terms of positive psychology social networks are one of the most important things for personal wellbeing.”

Another way in which caring for the environment contributes to personal wellbeing is the opportunity to create meaning.

“Nowadays, we don’t want only to exist, but we want to be well and feel fulfillment and satisfaction and to be happy,” says Ronen.

“We examined to what extent the curriculum at green schools changes the environmental behavior of children,” she said. “We saw that children who invest in something and feel invested — by helping clean their surroundings or by taking care of animals, for example — are happier.”

Meaning is also about engaging in something with societal value, Ronen says.

“The issue of sustainability is becoming more and more socially valuable across the world. We see that people who are engaging with things that society cares about are happier.”

Yet another connection, the researchers note, is that being close to nature simply does us good.

“Since the outbreak of COVID, I’ve been getting up in the morning, making myself a coffee and going out to the yard,” Ronen says. “I sit in the yard at 5 o’clock in the morning and listen to the birds while surrounded by my wonderful plants. I start the day with a much better feeling compared to starting it stuck in traffic.”

“People who have a good and strong connection to nature act in a more environmental manner,” Kerret said. “The younger the age that connection is built, the stronger it is and the longer it lasts.”

Kerret describes a positive spiral: “Each person starts with that small thing that they’re willing to do, and slowly it begins to grow. You see that you’re managing to create change, and that’s a good feeling. You also create a social norm around it, which is how you make an impact. You have influence as a consumer. It builds your environmental identity and makes you want to do more and more.”

And what about the doomsday headlines that have been appearing lately?

“First of all, I think that we’ve seen that scaring people doesn’t work,” Ronen said. “For years, I heard about the ozone hole, and it didn’t contribute anything to me. The media coverage on sustainability left me feeling that there’s nothing left for me to do, that I’m small, that the world is being destroyed and I’ll be destroyed.

“I think that giving people power back is key. People want to feel control, to know that they have the ability to influence things and to know that their smallest actions are valuable,” she adds.

By way of example, she notes how Israelis don’t leave the tap open while brushing their teeth. Since childhood, it’s been drilled into them that to preserve precious water resources they must not waste a drop.

Hope as a strategy

The researchers note that plenty of research has been done regarding climate-change coping strategies, and that hope is one such strategy.

“There’s always a middle path. It’s good that a person will be a little worried and anxious. Low-level anxiety encourages action. When you’re indifferent you don’t care what you do. But here, you can say ‘I care, I’m worried, but I’m going to channel my anxiety into action,’” Ronen adds.

Teenagers, who are susceptible to anxiety, looking for meaning and generally care more about the environment, can also be encouraged to act in order to mitigate their fears.

“I think that the right direction is to balance out the catastrophes that are taking place and tell them that they do have the ability to influence things, and that even the smallest course of action will give them a sense of meaning,” Ronen says.

“It’s always a question of how much we’re flooding them with information and how much we give them a sense that something can be done alongside it all,” she said.