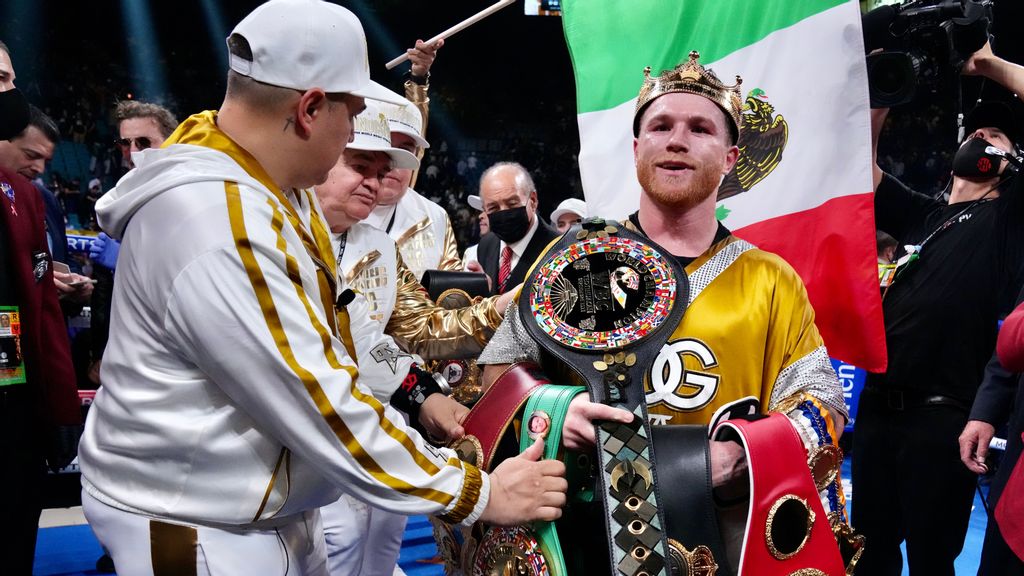 Canelo Alvarez sought to “break” the “jaw” of a boastful Caleb Plant, predicting an eighth-round knockout in advance of Saturday’s undisputed 168-pound unification bout at the MGM Grand in Las Vegas.

Alvarez took a little longer than he expected to finish the job and didn’t quite inflict the pounding he promised, but he did batter Plant around the ring before getting his third knockout in as many fights this year with 1:05 left the 11th round before a sold-out, boisterous, pro-Alvarez crowd of 16,586.

“It hasn’t been easy to get to this point,” said Alvarez, who reportedly earned a guaranteed $40 million compared to Plant’s $10 million, before pay-per-view proceeds. “But with your support, my family and my team we’ve gotten really far. This is for everybody, especially for Mexico. This is another one for our team. We did it tonight.”

Alvarez secured his fifth stoppage in seven bouts, a victory over an undefeated champion for the seventh time, and one over an unbeaten rival for the eighth, all on the 45th birthday of his trainer, Eddy Reynoso.

“Caleb is a good fighter,” Alvarez said. “I have a lot of respect for Caleb Plant. He was a difficult opponent with a lot of ability, and I do respect him.”

Considered by many to be the all-time greatest fighter in Mexican history, Chavez Sr., who served as ringside commentator for a Spanish network on Saturday, was 89–0–1 before losing his first bout and retired with a record of 107–6–2 (86 KOs).

“I’m not afraid to say that Canelo is on top of all the great Mexican fighters,” said three-time champion Abner Mares, who served as a ringside commentator. “Speaking of numbers, Canelo has surpassed everyone. Right now Canelo is the man. He is the face of boxing. Every Mexican champion deserves his respect, and Canelo has done it in his time.”

During a June event at Jalisco Stadium in Guadalajara, Mexico, Chavez Sr. told Alvarez, “My time has passed, but yours is NOW!,” adding, “My history and legacy are already written. You are now the greatest Mexican fighter,’” according to boxing journalist Claudia Trejos, who works for DAZN and Telemundo Deportes among other affiliations.

“Tonight was an outstanding display of boxing, incontrovertible control and power,” Trejos said. “Canelo took his time and systematically tore down Caleb’s tools. He created the space and capitalized on the opportunity to hurt Caleb and to finish him off in the 11th round.”

The 5-foot-8 Alvarez’s relentless pressure overcame an early and effective stick-and-move, jab-and-grab strategy employed by the savvy Plant, a 6-foot-1 boxer-puncher who won the first round on the cards of all three judges.

“Caleb was making the fight pretty difficult,” Alvarez said. “But Eddy told me to just stick to the game plan in the last two rounds.”

Alvarez increased the intensity as slugger and aggressor through the middle rounds, his masterful counter punching, sharp jab and body attack morphing into a brutal inside game of crisp combinations placed with sniper-like accuracy.

“Caleb was doing great, initially not letting Canelo use his skills before Canelo started closing the gap and penetrating Caleb’s impressive defenses,” said Leo Gonzalez of ESPN Deportes. “But Canelo finally found an opening and was able to hurt Caleb and score the first knockdown. After that, Canelo became like a shark when he smelled blood.”

A head-swiveling left hook to the jaw 31 seconds into the 11th wobbled Plant and was the beginning of the end. A teetering Plant ducked into a vicious follow-up right uppercut, which started his descent toward the canvas before a hybrid left hook-uppercut caught his left ear while he was on the way down to his gloves and knees against the ropes.

A valiant Plant rose at referee Russell Mora’s count of four but never recovered, stumbling across the ring into a neutral corner. Plant, a Tennessee native, was asked to raise his gloves.

“Do you wanna fight?” Mora asked.

Alvarez’s fight-ending sequence consisted of nine unanswered punches, the first a searing left hook to the chin that knocked Plant into the ropes. The final four punches were a right-left-right-left combination that dropped Plant to his back with his left leg resting on a rope. Plant attempted to rise, but Mora stood over him, already having waved an end to the fight.

“In the end, I got him. That’s the way it had to finish. He was already hurt, and I went for the kill,” Alvarez said of Plant, who trailed, 96–94, 97–93 and 98–92 at the time of the stoppage, and was taken to University Medical Center as a precaution. “He wanted to fight me and still continue. I told him there’s no shame. We are both men at the end of the day. We had a great fight tonight.”

Mexican-American two-time 168-pound champion David Benavidez (24–0, 21 KOs) was an interested observer on Saturday during a break from training in Los Angeles for a Nov. 13 clash with Kyrone Davis (16–2–1, 6 KOs).

“It was a good fight. Caleb Plant showed a lot of skills, taking advantage when Canelo’s defense lacked a little bit, and, of course, I think an all-Mexican fight between myself and Canelo would be a great event,” Benavidez told Zenger on Saturday night.

“I think Caleb Plant would have done a little better had he gone to the body a little bit more. But Canelo did what Canelo does, cutting down the angles. Caleb Plant had initially opened in the ring, applying pressure and scoring a great knockout in a very exciting fight and ending it in a spectacular way.”

Alvarez said he plans to enjoy his victory while considering his next options for an opponent and a likely return in May 2022 during the Cinco de Mayo Mexican holiday weekend.

The victory came nearly two years to the day since Alvarez rose two weight classes in November 2019 for a sensational 11th-round knockout that dethroned WBO 175-pound titleholder Sergey Kovalev and made him a four-division champion.

“Canelo is a beast, a monster. Canelo’s one of the few fighters who can carry his power all the way into the 12th round,” Mares said. “People still doubt Canelo to this day, and I don’t see why. He proved himself again with another knockout against another champion and one of the best in his weight class in Caleb Plant.”