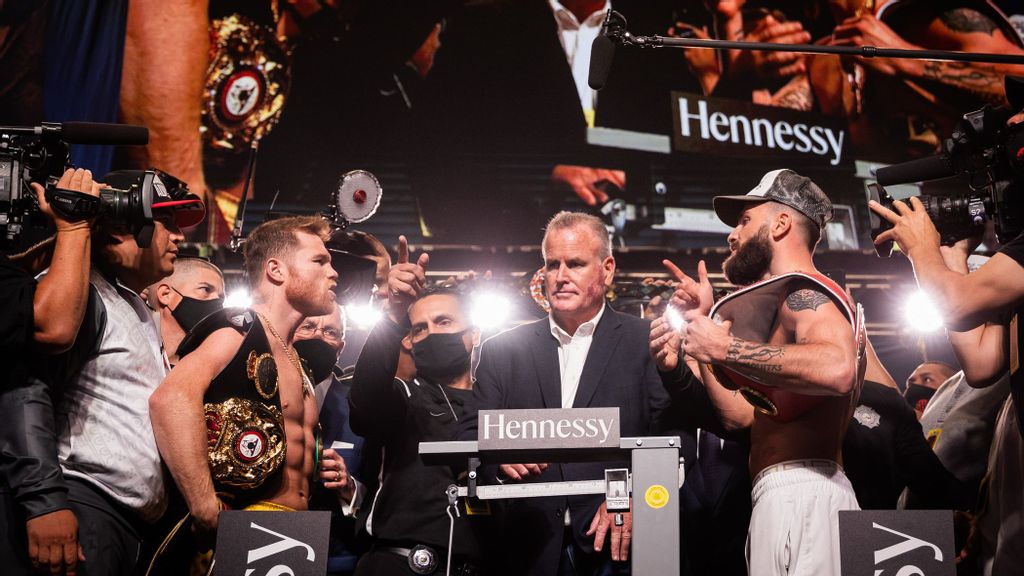 “Caleb is in the best shape of his life, looking extra sharp and better than ever as a boxer” said Plant’s father, Richie, an assistant to head trainer Justin Gamber, in an exclusive text to Zenger. “Without question Caleb’s going to win this fight and become the first 168-pound undisputed middleweight champion of the world.”

A 6-foot-1 IBF champion, Plant (21–0, 12 KOs) was not only more muscular but more vocal and supremely confident against a boisterous crowd partisan to the 5-foot-8 Alvarez (56–1–2, 38 KOs), a WBA/WBC/WBO titleholder who would become Mexico’s first undisputed super middleweight champion in victory.

The winner of Alvarez–Plant will become the sixth fighter to reach the undisputed plateau during the four-belt era, joining cruiserweight Oleksandr Usyk, middleweights Bernard Hopkins and Jermain Taylor and junior welterweights Terence Crawford and Josh Taylor.

Former heavyweight champion Mike Tyson stood on Alvarez’s side of the stage. Tyson predicted a victory by the red-haired, four-division champion, telling Showtime interviewer Jim Gray: “He deserves to have the nod,” adding, “[Alvarez] has proven himself to be the best fighter of his generation.”

“It means a lot [to have Tyson here],” said Alvarez, shortly after the former champion’s comment. “He was a great fighter. I wanna be like him one day.”

But Plant wants to make Alvarez resemble the Tyson of February 1990, who was dethroned by an upset 10th-round knockout by Buster Douglas. A 42–1 underdog, Douglas left “Iron Mike” on all fours, groping for his mouthpiece on the canvas and struggling in vain to put it back in.

“I’ve been the underdog before. It’s a place I like to be. I like people rooting against me. It gives me extra motivation,” said Plant, who is making his fourth defense. “When you’re fighting for undisputed status, you don’t need much more motivation than that. The way I see this fight turning out is [ring announcer] Jimmy Lennon Jr. saying ‘the new undisputed and still undefeated.'”

As his detractors repeatedly chanted, “Mexico,” Plant calmly stepped onto the scale, exposing a ripped abdomen and sculpted upper torso. His weight was announced at 167 pounds compared to 168 for Alvarez. Plant flexed a “double-biceps pose,” nodded in defiance and thrust both arms skyward with his pointer fingers extended to indicate he’s “No. 1.”

“Remember, it’s easy to sit in those seats. It ain’t easy to stand up here,” said Plant, pointing into the audience. “You can cheer for him all you want and boo me all you want. I love being the underdog.”

“Caleb looked like Superman up there, he really did,” Wade told Zenger after the weigh-in. “I’ve been with Caleb for four years, and he’s gotten better every year and with every fight.”

After leaving the scales, the fighters were separated by promoter Tom Brown as they jawed back and forth, gesturing and nodding their heads for emphasis.

His IBF belt strapped over his left shoulder, Plant yet again raised his “No. 1” right finger before pounding that right fist against his chest. Later, Plant directed that finger in Alvarez’s direction as if aiming a pistol.

Alvarez literally drew first blood against Plant during an initial press conference scuffle in September, delivering a blow that caused a cut beneath “Sweethands’” right eye. Plant attributed the still-visible scarring above his right cheek bone to an abrasion from the sunglasses he wore.

But Alvarez vowed to inflict more damage during Friday’s trash-talking, having already predicted an eighth-round knockout and third straight stoppage in as many bouts this year.

Wearing his WBC belt on his left shoulder and his WBA and WBO on his right, Alvarez will face the seventh undefeated champion of his career.

“I told him, ’for every action, there’s a reaction. You will see tomorrow.’ I have a good spirit inside of me. I don’t need to say anything else,” said Alvarez, in pursuit of a victory over an undefeated rival for the eighth time. “He will feel something different. Believe me. I feel blessed. I feel motivated for all of my fans. My family, my team, I feel motivated more than ever. It’s time.”

Alvarez said he has an answer for “Sweethands,” who earned his crown in January 2019 by scoring two knockdowns to dethrone IBF champion Jose Uzcategui by an upset unanimous decision.

Plant’s first defense was a four-knockdown, third-round stoppage of previously unbeaten Mike Lee, who entered their bout in July 2019 at 21–0 (11 KOs). Plant’s third defense was a 10th-round TKO of Germany’s Vincent Feigenbutz in February 2020, and his third January’s unanimous decision over former champion Caleb Truax.

“I’ve faced many good fighters with skills that are similar to Caleb,” said Alvarez. “It’s a style that I’ve seen before and I know what to do with it.”

Plant believes his slick boxing skills will trouble Alvarez, who was 18 years old when he won a razor-thin unanimous decision over Larry Mosley in October 2008.

Trout represented Alvarez’s sixth and final defense of his 154-pound titles before losing that September’s seventh defense by majority decision to five-division champion Floyd Mayweather. The then-23-year-old Alvarez was dethroned as WBA/WBC junior middleweight champion, but has gone 14–0–1 (8 KOs) since then.

Alvarez’s next fight after Mayweather was a 10th-round TKO of former champion Alfredo Angulo in April 2014 before winning that July’s disputed split-decision over two-division champion Erislandy Lara, a slick-boxing Cuban southpaw.

After winning his second title in as many divisions via unanimous decision over four-division champion Miguel Cotto of Puerto Rico in November 2015, Alvarez was troubled by the speed and movement of Amir Khan in his first defense before connecting for a sixth-round knockout in May 2016.

Plant is bigger and stronger than all of the above, but that’s not all, according to Wade.

“It’s not only about having speed and muscle mass,” said Wade. “Caleb’s going to be able to fight inside, outside, from mid-range, and he’s generally going to give Canelo problems.”

Most recently there was Alvarez’s majority decision unification victory over then-undefeated WBA/WBC titleholder Gennady Golovkin (September 2018) in a rematch of their draw in September 2017.

“Canelo’s had multiple close fights. But I believe the right people are in place to make the right decision on Saturday night,” Plant said. “There are a lot of things that I possess that are going to give him issues in the fight. I just can’t wait for the bell to ring Saturday night. You’ve got your first undisputed champ and his name is Caleb Plant.”