You Can Run But You Can’t Hide: Shakur Stevenson Wants Oscar Valdez In 2022

Following dominant bout against Jamel Herring, super featherweight champ sets his sights on other champions in his weight class. 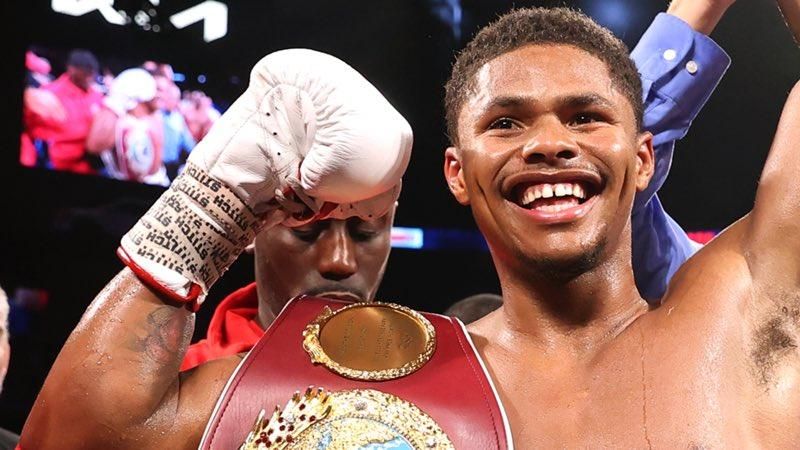 After receiving harsh criticism from fans and even ESPN commentator Tim Bradley following what was deemed a “safe” performance in his unanimous decision win over Jeremia Nakathila in June, Shakur Stevenson entered his WBO title shot against Jamel Herring with a chip on his shoulder and a point to prove. Stevenson, the 2016 silver medalist in boxing at the Olympic Games, erased all doubts, stopping Herring, a durable veteran, with a 10th-round TKO in their super featherweight title bout in October.

Stevenson controlled the range and dictated the pace from the outset of that fight. The budding star earned his boxing stripes and the WBO title with his performance, and now looks to fight the best the division has to offer. Promotional stablemate Oscar Valdez tops the list of opponents with whom Stevenson hopes to share the ring when he returns next year. Although Stevenson feels his promoter, Top Rank Promotions, and Valdez are trying to delay the fight, he feels pressure from the boxing community will eventually lead to the fight happening.

Zenger caught up with the Newark, New Jersey, native to discuss his title-winning performance, his future and much more.

Zenger: Congratulations on the win and the performance against Herring. You seemed to be extra dialed-in for that one.

Zenger: You were obviously working hard in the gym. How was your training camp for this fight?

Stevenson: I put a lot of work in, in the gym. This was a big moment for me, and I had to lock in and work extra hard.

Zenger: Did you feel slighted or disrespected going into this fight?

Stevenson: A little bit. I think I had a bad night in my last fight [vs. Jeremia Nakathila], and a lot of fans went off of that, and I don’t think they should have.

Zenger: You took control of the Herring bout right away. At what point during the fight did you feel it would be your night?

Stevenson: I ain’t gonna lie, I knew it was going my way before the bell even rung. I knew what it was. I was so confident going into this fight. When I saw him walk out with Jada [Kiss], and the crowd went crazy, I knew he had fully prepared himself. But even in the locker room, I just knew it would be my night. I knew I would have a hell of a night. I felt good. It felt like a boxing gym day. I was telling my team, it felt like another day in the office. It felt like it and I showed that.

Zenger: You looked really comfortable in there. Did you do anything different in camp or was it just one of those nights for you?

Stevenson: I felt like I had to redeem myself. Something in training felt different. I feel like my fight before this one … people don’t understand, I feel like I overtrained, like I overworked. People don’t really know that you can overwork yourself. They think if you do all this crazy training, you going to go in there and be a beast, it’s cool to train hard. But sometimes you can overwork yourself, and that’s what I feel I did for the Nakathila fight.

Even fight week for that one, I was still working out hard, still doing things that I shouldn’t have been doing, and I feel like that played out in the ring. This fight was a lot different. I feel like I trained the way I was supposed to train; I did everything I was supposed to do, and that’s why this fight just felt like a regular day in the gym. I was fresh. My body was fresh. I didn’t feel like I killed myself in the gym.

Zenger: I am sure you will be sticking to the regimen you used for the Herring fight.

That Nakathila fight, we kind of switched things up and did a different type of training camp, and we’re not going to do that again. That’s overdoing it. We’re boxers at the end of the day; we’re not track stars or long-distance runners, or any of that. We gotta focus on our boxing, and I feel that we did that for this camp.

Zenger: Anything about Jamel surprised you?

Stevenson: His punching power — he’s definitely got it. He got some crack.

Zenger: What did you think of the stoppage?

Zenger: Obviously, you have history with his camp and team, he is familiar with yours, I thought the camps coming together at the end was a good deal, considering some of the pre-fight build up. What did that moment mean to you?

Stevenson: I thought about the moment before it happened. I knew what I was going to be doing after the fight. I told my team, this all fight stuff at the end of the day, but when the fight is over I’m going to dap him up and after I beat him, I’m going to show love. I knew I was already going to do that.

You have to realize, me and them are cool people. I do a lot of training camps with them. I’m close with, Bud [Terence Crawford], BoMac, Red, Jamie… that whole team is like family to me. They helped me out a lot. At the end of the day, it’s all business. After the fight, it was all good. I was trying to get them to come out and party with me afterwards, but I guess they were all a little bit busy.

Zenger: You are becoming one of the stars of boxing. To see, Ye [Kanye West], Michael B. Jordan and celebrities like that come out and support your fight, how did that feel?

Stevenson: It felt great, especially, Kanye West [Ye] because he don’t really go to fights like that. So, just to have him come watch, he came to my locker room before the fight and showed some support. That felt good. It felt real good knowing that I can bring somebody like that out. Even with Michael B. Jordan, he from North New Jersey, too, so you know he was there supporting me. He always hit me up and show a lot of love, so at the end of the day, it feels good bringing out those types of celebrities. We gotta bring out more people. We gotta get people like Michael Jordan or somebody there. We gotta do bigger numbers than that, so I gotta stay focused.

Zenger: Did you enjoy fighting in the South, in Atlanta?

Stevenson: It felt good. It felt like home. The crowd was amped up, we walked out, everybody was going crazy, and after the fight, they showed a lot of love. Atlanta felt like another home. It felt like a lot of my people were there supporting, so it was a good night, and a great crowd.

Zenger: You are now the WBO champion, coming off the biggest night of your career, but I must ask about your future plans and a potential fight with WBC champion Oscar Valdez. Two-part, are you done for the year, and is Valdez on the 2022 radar?

Stevenson: I’m definitely done for the year. They can’t get me to fight this year again. I got my daughter on the way. She’s coming in December. I just want to stay home and be with my family and meet my daughter. But next year, we’re looking for the big fights. Oscar Valdez is a big fight. That’s a fight I have wanted for a long time. I’m definitely looking to get in the ring with him next year.

I know Top Rank trying to save as much money as they can with Oscar Valdez, but… I don’t know what’s going on. It seems like they’re trying to save Oscar Valdez from fighting me. But at the end of the day, it’s gotta happen. Fans are going to demand it. They’re going to go crazy, and they can’t avoid it. I don’t know how much longer they gonna try, but they can’t avoid it. Next year, we are definitely looking to get in the ring with Oscar Valdez, then the other champions, and then take over the whole 130-pound weight class.

Zenger: Congratulations on the baby girl coming in December — she will definitely change your life. Do you feel like fatherhood will change your approach to boxing? How long do you want to be in the sport and things of that nature?

Stevenson: Not at all. I got my mind already set. I love boxing at the end of the day. I’m not just doing it for the money; I really love the sport. I plan on being in the sport as long as I love it. Once I stop loving it, I’ll be done, but I don’t plan on stopping when I’m 30. Some fighters say, “I wanna be done at this age,” and I respect that because this is a dangerous sport. But I don’t plan on taking any punishment, so I feel like I could last a long time in the sport, and I plan on doing that.

Zenger: Congratulations on the win, I look forward to seeing you back in the ring in 2022. Is there anything else you would like to add?

Stevenson: I appreciate that most definitely. Everybody can follow me on Instagram and on Twitter @ShakurStevenson. Keep tuning in. We should be back in March or April, and I will be ready to put on another great performance.