Attacker who stabbed woman in the stomach faces charge of attempted murder. 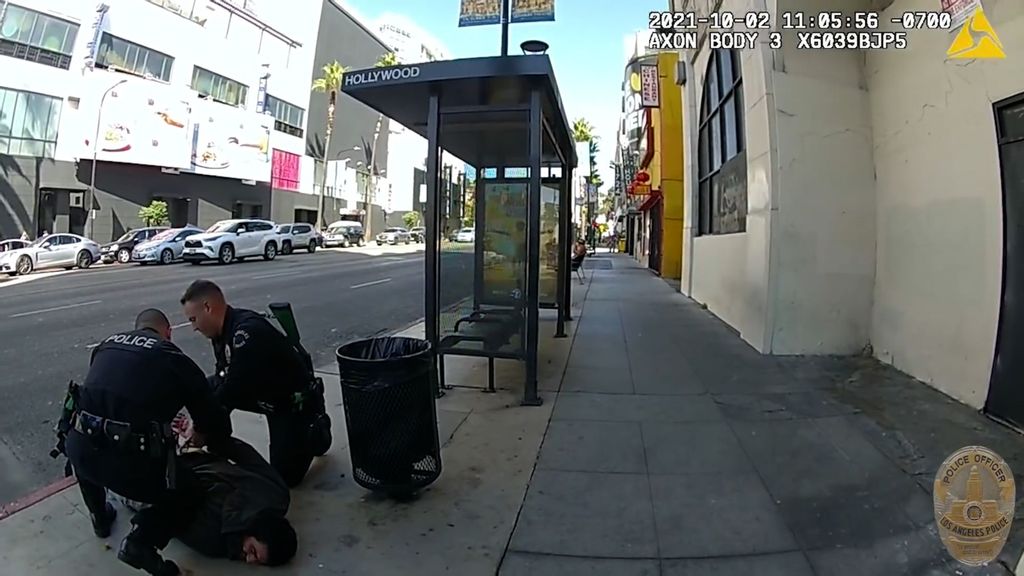 The Los Angeles Police Department is investigating an officer-involved shooting after a man allegedly attacked a woman with a knife on Oct. 2.

The police department released body-cam footage of the incident in Hollywood, California, on Nov. 4.

The suspect, identified by police as Grisha Alaverdyan has been charged with attempted murder.

“On Oct. 2, 2021, around 11 a.m., a woman was walking in the area of Hollywood Boulevard and Highland Avenue. The suspect, later identified as 27-year-old Grisha Alaverdyan, approached the woman and stabbed her in the stomach,” police said in a statement released on Oct. 15. “Friends of the woman flagged down a LAPD sergeant who requested additional units.

“With additional units at scene, Alaverdyan was given directions that he did not comply with. While armed with the knife, he moved toward the officers, resulting in an officer-involved shooting and the use of a beanbag shotgun. Alaverdyan was struck by both gunfire and the beanbag round.

“Both the woman who had been stabbed, and Alaverdyan were transported to local hospitals for medical treatment.”

Their conditions were not reported.

Alaverdyan’s knife was recovered at the scene, police said, and no officers were injured during the incident.

“LAPD’s specialized Force Investigation Division responded to the scene and interviewed witnesses and supervised the collection of evidence by the Forensic Science Division,” the Los Angeles Police Department said.

“The complete investigation will be reviewed by the chief of police, the Board of Police Commissioners and the Office of the Inspector General to determine the thoroughness and accuracy of the investigation and whether the use of deadly force complied with LAPD’s policies and procedures.

“Additionally, the Los Angeles County District Attorney’s Office who responded to the scene will review the subsequent FID investigation; evidence collected and witness statements to determine if the force used by the officer was reasonable.”

The officer involved in the incident has been identified as Police Officer II Thor Abiva, Serial No. 44313, assigned to Hollywood Area Patrol.

The Los Angeles Police Department noted in its statement that the information “is based on a preliminary and ongoing investigation, which continues to evolve as investigators interview witnesses, review physical and electronic records, and analyze forensic evidence.”

The facts could change as the investigation develops, the department said.

Two other officer-involved shootings are under investigation by the Los Angeles Police Department: one on Oct. 24 in the Mission Division, and one on Oct. 31 in the LAPD Van Nuys Division.