Australian man slowed traffic with a stunt that surprised even the highway police. 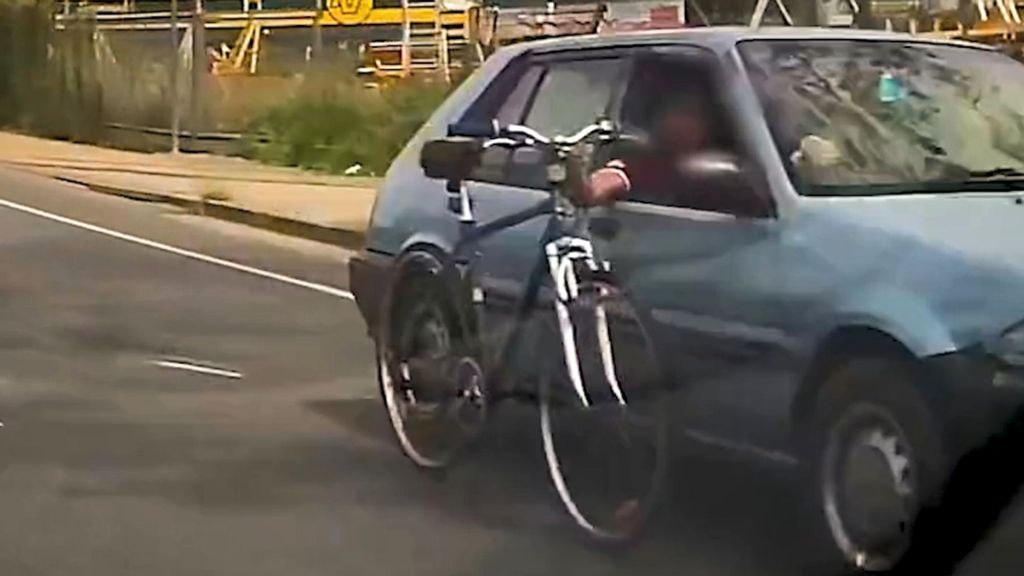 A man drove his car with his left hand and held a bicycle outside the driver’s window, wheeling it along as he drove on Nov. 2 in Maryborough, Australia. (Queensland Police/Zenger)

Australian cops discovered a traffic jam was caused by an unusual source. A man was driving a car and pushing a bicycle at the same time.

The surprising footage was filmed Nov. 2 by police officers traveling along Kent Street, in the town of Maryborough, Australia.

The Queensland Police put the video online and said: “Just when we think we have seen it all…”

The Maryborough Highway Patrol was conducting routine patrols when their attention was drawn to a “wheely interesting” vehicle.

In a statement, Queensland Police said: “As per the photo below, the driver of the six-wheel drive was attempting a very unique and dangerous transportation method.

“The driver, a 30-year-old Maryborough man is alleged to have been driving the vehicle with his left hand and was holding the bicycle outside the driver’s window, wheeling it along as he drove along Kent Street.”

After speaking to police, the driver was issued a traffic-infringement notice. “Officers were glad to speak to this motorist before anything serious happened on our roads,” the statement said.

In the footage, police pull over the man with the bicycle. Then, one of the officers says: “I just pulled over because of this — you can’t do that,” referring to the unusual arrangement.

The man inside appears surprised and says, “Oh, really.” The officer then asks: “Why can’t you stick it in the back of your hatch?”

The man explains the bike would not fit in the trunk of his car. “Well, you can’t drive along like that, you’re holding up that big line of traffic that was behind you,” the police officer told him, pointing to the line of cars.

Still not convinced he has done anything wrong, the driver says: “I didn’t want to go too fast in case it shot off into a car, mate.”

The police officer is unimpressed with his reasoning and dismisses the comment, saying, “Yeah, mate, silly idea.”

Sergeant Josh Churchward, officer in charge of Maryborough Highway Patrol, said in the statement that pushing a bike alongside a car “could have resulted in potentially devastating consequences,” even over short a distance.

“Driving is something that requires your full attention, and you should take all necessary care at all times,” he said.

“We’re glad nobody was hurt in this instance, but we do want to remind everyone that road safety is everyone’s responsibility. Something like this not only puts yourself at risk, but other road users, too.