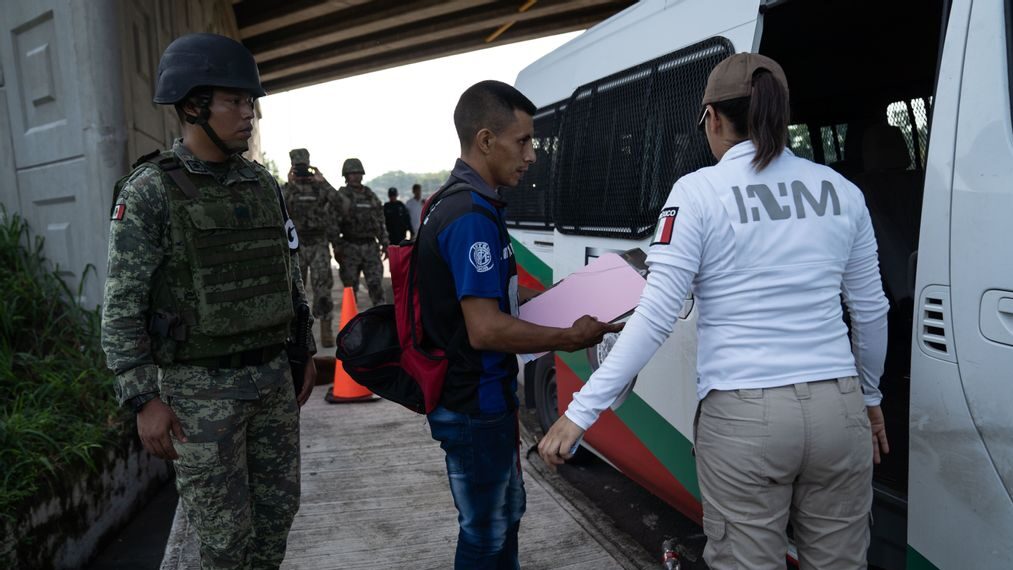 Clashes have risen between migrants and Mexican authorities.

Two migrants died and several were injured after officers of Mexico’s National Guard fired at a vehicle.

A Nov. 3 statement from the agency reported three vehicles evaded a security post in the municipality of Huixtla. Later, the agents had an encounter with a truck and asked its driver to stop. The driver sped up and tried to run them over. The officers fired at the vehicle, intending to stop it. The vehicle came to a halt shortly afterwards.

The agents said several people left the vehicle and ran in different directions, but were arrested. “Four injured people and one more without vital signs” remained in the truck.

The Chiapas 11 Regional Coordination’s agents presented the report at 1:40 am on Oct. 31, according to the statement.

Later that day, the Chiapas Attorney General’s Office opened an investigation into the shooting homicide of a Cuban migrant, who was found near a vehicle on a rural road in the state’s municipality of Pijijiapan.

Activists accompanying the migrant caravan — such as Irineo Mujica, from the organization Pueblo Sin Fronteras — said Mexico’s National Guard attacked several migrants with bullets, and at least 13 were injured as a result.

Since the beginning of the year, the region has experienced an unprecedented migratory wave, with 147,000 undocumented people traveling through Mexico from January to August. The figure triples the 2020 count.

The current group has been walking for more than a week. Its journey began in early September after the Mexican authorities thwarted the advance of four previous caravans that left from Tapachula, a Chiapas municipality on the border with Guatemala.

At that time, several UN agencies and NGOs criticized the use of force in the operations undertaken to disintegrate these caravans.

Activist Eunice Rendón, the coordinator of Agenda Migrante, a nonprofit organization advocating for migrants’ rights, went through the facts on Twitter. “Elements of the National Guard fired at a vehicle with 13 migrants who have entered the country illegally; one died, and two more were injured,” her post reads.

Eight migrants from the vehicle are originally from Cuba, three from Ghana, and one from Brazil, according to Rendón.

The events happened on the dirt road that connects the Echegaray peasant community to Margaritas, in the municipality of Pijijiapan.

So far, it is unknown if any of the National Guard agents will appear before the authorities. The two injured migrants are receiving treatment in a hospital in Pijijiapan.

A week ago, a new migrant caravan left Tapachula, Chiapas, for Mexico City. Its members intend to request asylum and complain about the human-rights violations they suffered in the country, as well as the system’s slowness in dealing with their cases.

Some caravan participants said their ultimate goal is to reach the U.S. border, where the number of migrants attempting to cross rose to 200,000 in July, “reaching the highest monthly total in more than two decades,” said the Pew Research Center.

«Previous Post
Boxing’s ‘Tank’ Has Been Steamrolling His Opponents At An Amazing Pace»Next Post
Apocalypse Wow: Exploding Comet So Hot It Turned A Desert Into Glass, Says Study