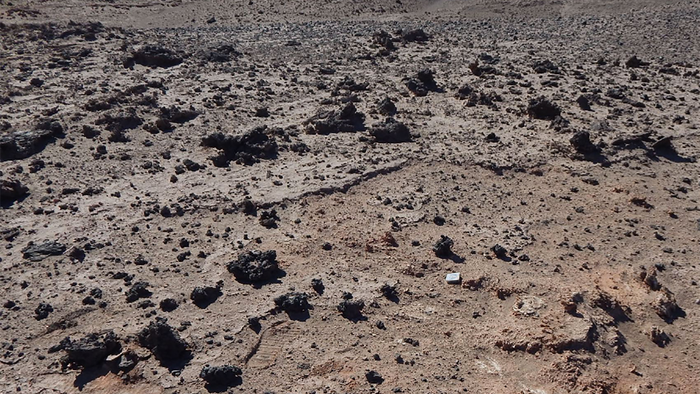 Deposits of dark silicate glass in Chile's Atacama Desert are found along a 47-mile corridor. A new study shows that those glasses were probably formed by the heat and shock caused by the explosion of a comet some 12,000 years ago. (P.H. Schultz/Brown University)

A fireball exploded over the Atacama Desert in South America about 12,000 years ago with heat so devastating that it turned the sandy soil in the region into slabs of silicate glass.

Researchers detailed their findings in the journal Geology, explaining that samples of the glass retain bits of minerals usually found in celestial objects such as meteors and comets.

“This is the first time we have clear evidence of glasses on Earth that were created by the thermal radiation and winds from a fireball exploding just above the surface,” said geological sciences professor Peter Schultz of Brown University. Schultz said that given the wide area impacted, “this was a truly massive explosion.”

While he and his colleagues are accustomed to seeing exceptionally bright meteors known as bolides in the sky, Schultz said that “those are tiny blips compared to this.”

Fields of black or dark green glass have been found along a corridor approximately 47 miles long in northern Chile east of Pampa del Tamarugal, a region known for extractive mining and agriculture. The glass’s origin has long been debated, even though volcanism and grass fires have been dismissed as causes.

According to the new study, the material closely resembles samples of a comet dubbed Wild 2 that were collected and returned to Earth by NASA’s Stardust mission in 2006.

Brush fires could not have forged the glass, the study concluded, noting that the minerals were shocked, rocked and rolled while still molten. The researchers assert that this proves there was an airburst explosion coupled with tornado-like winds.

A chemical analysis of the glass also lent credence to its extraterrestrial origins. An international team determined that the glass contained zircons, minerals that had decomposed due to heat into crystal-like baddeleyite. This can only happen at temperatures exceeding 3,000 degrees Fahrenheit — far hotter than a brush fire.

Also, exotic minerals only found in meteorites and other extraterrestrial rocks were in the glass. These include troilite, cubanite and calcium-aluminum-rich inclusions that matched samples brought back by NASA’s Stardust mission.

Study co-author Scott Harris said the ancient intruder “has all the markings of a comet,” and its minerals resembling the Stardust samples are “really powerful evidence that what we’re seeing is the result of a cometary airburst.”

During the glacial Pleistocene Epoch, which lasted from about 2.6 million to 11,700 years ago, South America was home to megafauna that included ground sloths, saber-toothed cats, bears, armadillos and mammals resembling elephants.

“It’s too soon to say if there was a causal connection or not, but what we can say is that this event did happen around the same time as when we think the megafauna disappeared, which is intriguing,” Schultz said. Many of these species ceased to roam the earth about 10,000 years ago. Early Americans also hunted them and may have contributed to their demise.

“There’s also a chance that this was actually witnessed by early inhabitants, who had just arrived in the region. It would have been quite a show,” Schultz added.

While further analysis will be needed to establish the exact date of the fireball, researchers point to about the time of the megafauna extinction. The size of the fireball is also still in question.

“There may be lots of these blast scars out there, but until now we haven’t had enough evidence to make us believe they were truly related to airburst events,” Schultz said. “I think this site provides a template to help refine our impact models and will help to identify similar sites elsewhere.”