Viva Mexico! Canelo Alvarez Is On The Verge Of Becoming His Country’s Greatest Boxer Of All Time 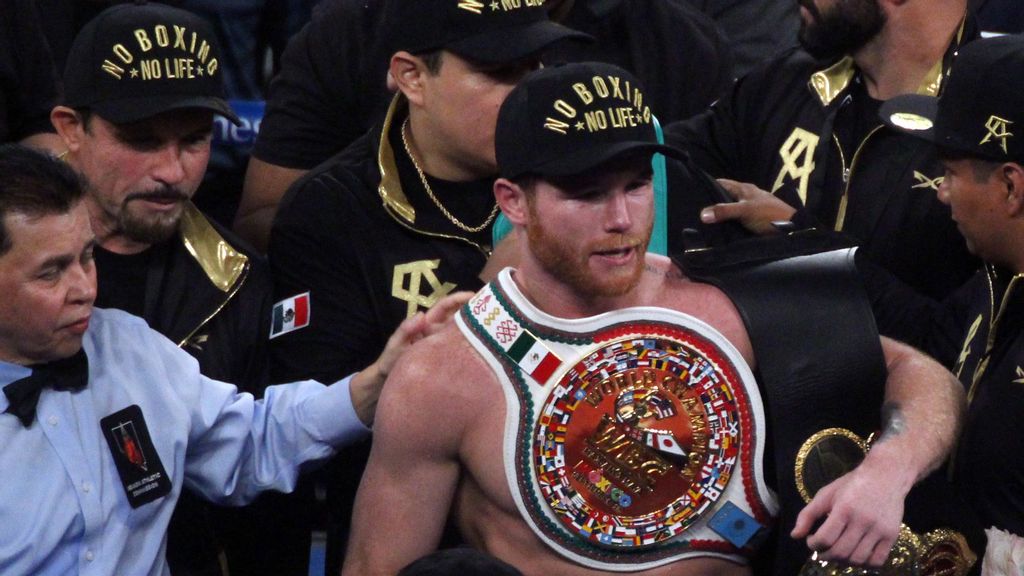 “Being the undisputed champion is huge for my legacy. Now we’re one fight away,” said WBA/WBC/WBO champion Canelo Alvarez (center) who can become Mexico's first undisputed 168-pound title winner with a victory over IBF counterpart Caleb Plant on Saturday. (Sumio Yamada/WBC Images)

Chavez Sr. summoned Alvarez after the event, pulling him close, offering praise and appearing to pass the torch.

“Julio Sr. asked Canelo to step up to the apron at the end of the exhibition as I was getting ready for the postfight interview,” recalled Claudia Trejos, a sports anchor, journalist and reporter for DAZN and Telemundo Deportes among other affiliations. “Julio Sr. grabbed Canelo by the head and told him, ‘My time has passed, but yours is NOW! My history and legacy are already written. You are now the greatest Mexican fighter.’”

Alvarez (56-1-2, 38 KOs) is predicting an eighth-round knockout and his third straight stoppage against IBF 168-pound champion Caleb Plant (21-0, 12 KOs) during their unification bout on Nov. 6 at the MGM Grand in Las Vegas.

By adding Plant’s IBF crown to his WBA/WBC/WBO versions with his fourth fight in 11 months and a victory over an undefeated rival for the eighth time in his career, Alvarez would become the first undisputed super middleweight champion from Mexico.

“Being the undisputed champion is huge for my legacy. Now we’re one fight away,” said Alvarez, a unified champion at 154, 160 and 168 pounds. “Not only would it be an honor to be the first Latin American fighter to do it, but there’s only a select club of fighters who have achieved this [in other weight divisions].”

“But Canelo being a champion at super welterweight, middleweight, super middleweight and light heavyweight is as unique feat of boxing greatness. Canelo is as great as any Mexican champion you can mention, and he is still building his legacy.”

Three-division champion Abner Mares already rates Alvarez ahead of Chavez, who was 89-0-1 before losing his first bout and retired with a record of 107-6-2 (86 KOs).

Zarate put together a run of 55 consecutive victories and two streaks of 20 or more consecutive knockouts. Olivares was a three-timer with a record for most victories in unified title bouts in bantamweight history. Sanchez was once-beaten when he died in a car accident in August 1982, and Lopez retired undefeated.

“Canelo’s legendary as a four-division world champion who is known worldwide. Canelo has done a lot more than any of the ones I just mentioned,” Mares added. “He’s surpassed them all in name and actions, and he’s looking to conquer a lot more.”

“I never thought that anyone could mean what Chavez has meant to Mexican fight fans,” said Flores, boxing analyst for Premier Boxing Champions, TGB Promotions and Triller.

“It’s already unreal when you look at Canelo’s resume and consider the guys that he’s beaten, but Canelo is so young and has a desire to really claim his legacy by defeating Plant to become undisputed.”

As a 20-year-old, Alvarez earned his first crown and the WBC 154-pound championship by unanimous decision over Matthew Hatton in March 2011.

Alvarez’s second title in as many divisions came via unanimous decision over four-division champion Miguel Cotto of Puerto Rico in November 2015, and he was a three-division champion following a four-knockdown, third-round TKO of WBA “regular” 168-pound champion Rocky Fielding in December 2018.

“Surpassing the feeling of pride and special connection that Julio Cesar Chavez had with Mexican fight fans is difficult,” Osuna said. “It’s like having that rich uncle that buys you cool things, but liking the one who played catch with you in the park more. Shiny things are great, but it’s that ‘feeling’ that you just can’t buy.”

Alvarez made six title defenses at 154 pounds before falling by majority decision to five-division champion Floyd Mayweather in September 2013. The then-23-year-old Alvarez was dethroned as WBA/WBC junior middleweight champion.

Canelo is 14-0-1 (8 KOs) since the Mayweather fight. His final defense of his initial crown was a unanimous decision unification victory over southpaw Austin Trout in April 2013, which added Trout’s WBA crown to his WBC title.

In May, Alvarez’s eighth-round stoppage of Billy Joe Saunders added the previously unbeaten southpaw’s WBO title to his WBA/WBC crowns.

“Canelo has mastered technique, power, precision and great strategy,” Sulaiman said. “Canelo can still bring the pressure and go toe to toe, but he also has a great combination of skills never before seen in a Mexican fighter.”

Barrera won two of three bouts against Morales, and Marquez was 1-2-1 against eight-division champion Manny Pacquiao, stopping him once in the sixth round. But Alvarez’s closest thing to a rivalry was his majority decision unification victory over then-undefeated WBA/WBC titleholder Gennady Golovkin (September 2018) in a rematch of their draw in September 2017.

“[Alvarez] has denied himself the opportunity to settle the [Golovkin] debate with a definitive win, which I think could come if they fought for a third time,” Osuna said. “At age 31, Canelo has many chapters yet to write in his already illustrious story.”

“Floyd Mayweather is a legend who made Canelo look like the kid that he was,” Mares said. “But since then, Canelo’s beaten champions who are Hall of Famers like Golovkin, Kovalev, Cotto, Mosley, Lara and Jacobs. Canelo’s already a legend.”

“Canelo’s willing to face guys who will fight for a reasonable price. He’ll fight anybody whereas other guys won’t,” said Sanchez, Golovkin’s corner man against Alvarez. “Canelo is like the Sugar Ray Leonards, Marvin Haglers, Thomas Hearns, Roberto Duran and Wilfredo Benitezes in the 1980s who were always fighting each other.”

From 2010 to 2020, historian Cliff Rold of boxingscene.com ranked Alvarez ahead of Mayweather as Fighter of the Decade “based on the success and higher activity over the course of the decade.

“When Canelo fought Golovkin, he had to take Golovkin’s right hand, and every single one of those right hands in a gut check,” Rold said. “Canelo had to figure out Golovkin and come up with a completely different strategy for their second fight, and if that’s not a gut check, then I don’t know what is.”

“With me and Canelo fighting so close in proximity to each other, that’s the fight to be made,” said Benavidez, 24. “There is no doubt Canelo’s fighting everybody, and he’s the man right now, but he’ll get a lot of backlash from Mexican fans if he doesn’t fight me.”

Flores wants to see Alvarez-Benavidez if the former gets beyond Plant.

“Caleb Plant won’t be an easy fight for Canelo, but Benavidez is a pure savage who loves violence,” Flores said. “If Canelo gets past Plant, Benavidez versus Canelo would be the fight to make, enhancing the legacy of both as Mexican warriors.”

Charlo would rise to face Alvarez, according to trainer Ronnie Shields.

“Jermall can still make 160, but the reason for moving up would be to fight the biggest guy out there, and right now, that’s Canelo. That’s the reason we’re going to Las Vegas this weekend,” Shields said of Charlo, a two-division champion.

“Jermall wants to fight whoever wins. Canelo or Caleb Plant. Jermall was Canelo’s mandatory at 160, but Canelo gave up the title and fought somebody else for it. Canelo refused to fight Jermall at 160 and moved up.”

Osuna said Alvarez needs a definitive gut-check challenge during which he snatches victory from the jaws of defeat.

“Despite all of the names on Saul’s resume, some at the latter stages of their career, Canelo lacks a signature drag-them-out moment in any of his fights because he tends to make them look too easy,” Osuna said.

“Canelo’s talent and power are on par with that of any Mexican fighter that came before him. His discipline and work ethic set him apart as exemplary. Already the current ‘face of boxing,’ Canelo could eventually be recognized as the greatest Mexican fighter of all time.”

“‘You are still writing your story,’’ Trejos heard Chavez Sr. tell Alvarez. “‘It will be bigger than mine. You are the face of boxing.’”
Canelo Alvarez’s Top 15 victories