Timber from a ship most famous for a wreck and a mutiny reveals how the Dutch overcame timber shortages to build their fleet.
By Peter Barker November 4, 2021
Facebook
Twitter
Linkedin
Email 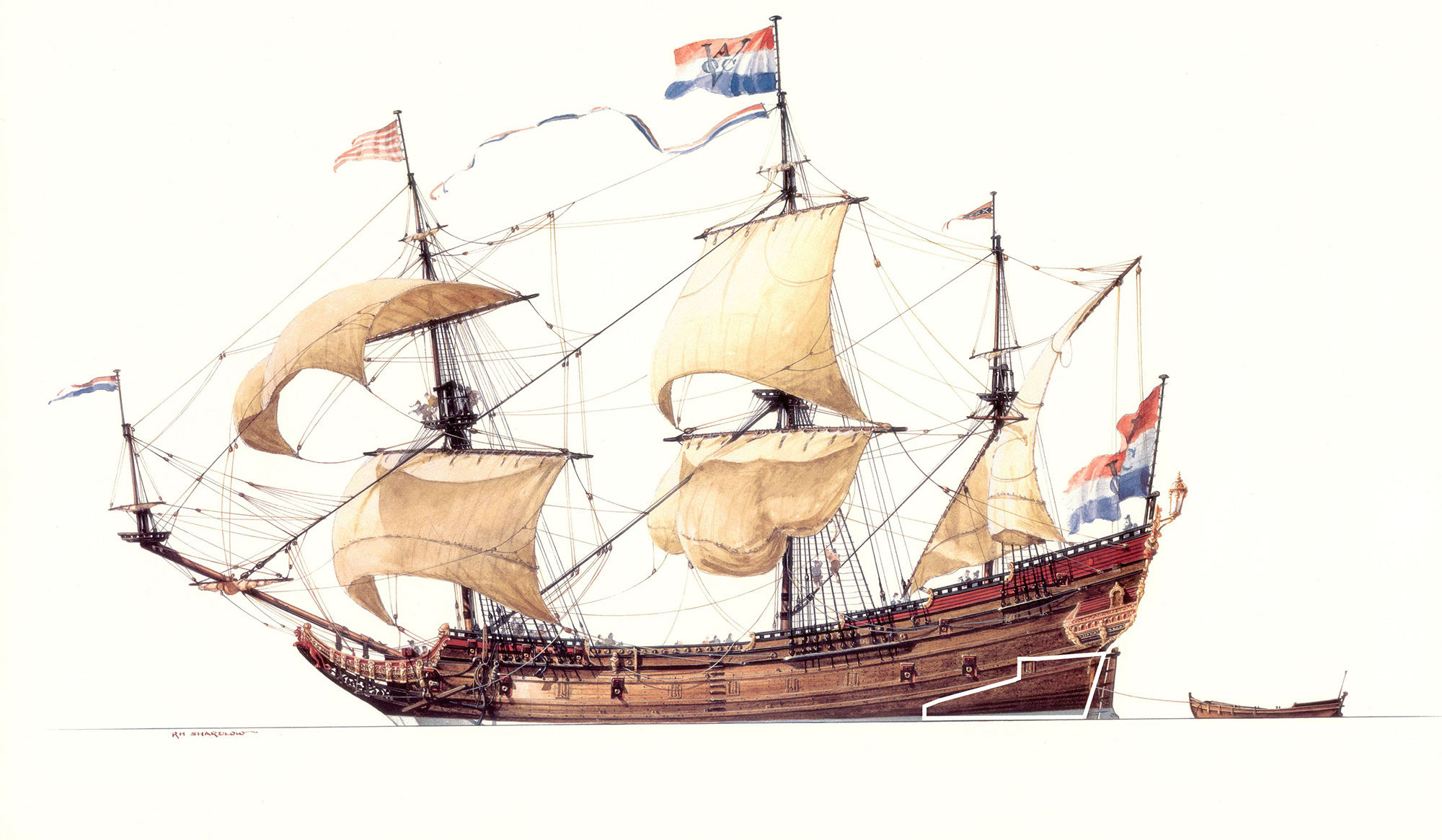 Artist's impression of the 1629 Dutch ship Batavia. The white line indicates the preserved section of the port-side transom raised from the shipwreck site. (Ross Shardlow/Zenger)

An examination of a historic Dutch ship that brought the first official European settlers to Australia’s shores has revealed how the Dutch Republic overcame timber shortages that plagued other nations.

Researchers studying the timber used to build the ship “Batavia” between 1626 and 1628 in Amsterdam have discovered how the Dutch trade network helped the Dutch East India Company (VOC) to flourish against other European powers such as Portugal and France.

“Oak was the preferred material for shipbuilding in northern and western Europe, and maritime nations struggled to ensure sufficient supplies to meet their needs and sustain their ever-growing fleets,” said study co-author Marta Dominguez-Delmas, VENI fellow at the University of Amsterdam.

“Our results demonstrate that the VOC successfully coped with timber shortages in the early 17th century through diversification of timber sources,” she said. The Dutch East India Company was the world’s first multinational trading company.

The Batavia wreck was raised from the seabed in 1970 and has since been on display at the Western Australian Shipwrecks Museum in Fremantle.

Researchers took timber samples to gain a better understanding of the materials used to construct the mighty 650-ton ship. Their findings were published in the journal Plos One.

“The VOC used exclusively oak (Quercus sp.) for the main structural elements [hull planks, framing elements, keel, etc.], with Scots pine (Pinus sylvestris) used for sacrificial planking [in the outer part of the hull, below the waterline],” Dominguez-Delmas said in an interview.

Dominguez-Delmas said the Dutch were able to avoid timber shortages because they had an extensive trade network that delivered wood from Northern Europe.

The British took great pride in building their ships with “locally sourced” oak, while the Spanish and Portuguese started importing timber from the Dutch and building ships in their colonies..

“The Dutch were actually the ones supplying timber from Scandinavia and the Baltic to Spain and Portugal,” said Delmas.

The University of Amsterdam stated that 706 ships were built in VOC shipyards in the Dutch Republic during the 17th century, though very little is known about the timber itself, where it was sourced and how it was used to build the ocean-bound vessels.

The lack of domestic wood sources in the mid-17th century did not prevent the Dutch Republic from being able to produce unprecedented numbers of ocean-going ships for long-distance voyages, according to Flinders University archeologist Wendy van Duivenvoorde, one of the authors of the study.

Dominguez-Delmas said the Batavia was headed for a city of the same name, the capital of the Dutch East Indies, known today as Jakarta, Indonesia.

“The Batavia sailed too far east, and when it made the turn north, it ended up wrecking on the reefs of [the] Abrolhos Archipelago, off the coast of Western Australia,” she said.

Of the 341 passengers on board, 40 drowned while the rest swam to shore.

The ship’s commander, Francisco Pelsaert, searched nearby islands for a natural water source to no avail. He took the ship’s longboat to the city of Batavia with a small group to get help, leaving the rest of the passengers and crew behind.

Jeronimus Cornelisz, a merchant under Pelsaert, was left in charge of the survivors. He sent a group of men loyal to Pelsaert to look for water on a distant island and then orchestrated a mutiny that resulted in the deaths of more than 100 people and turned the female survivors into sex slaves.

The men made their way back to the original camp after hearing stories of the atrocities from those who had escaped and organized a revolt.

Pelsaert returned as the fighting raged and had Cornelisz and his co-conspirators tried and convicted.

Six of the mutineers became the first European men to be legally executed in Australia, and two of the men were exiled to the continent, becoming its first official European settlers.