Singed puss is recovering after being scorched by ash from the Cumbre Vieja volcano, which has been spewing lava since Sept. 19.
By Peter Barker November 4, 2021
Facebook
Twitter
Linkedin
Email 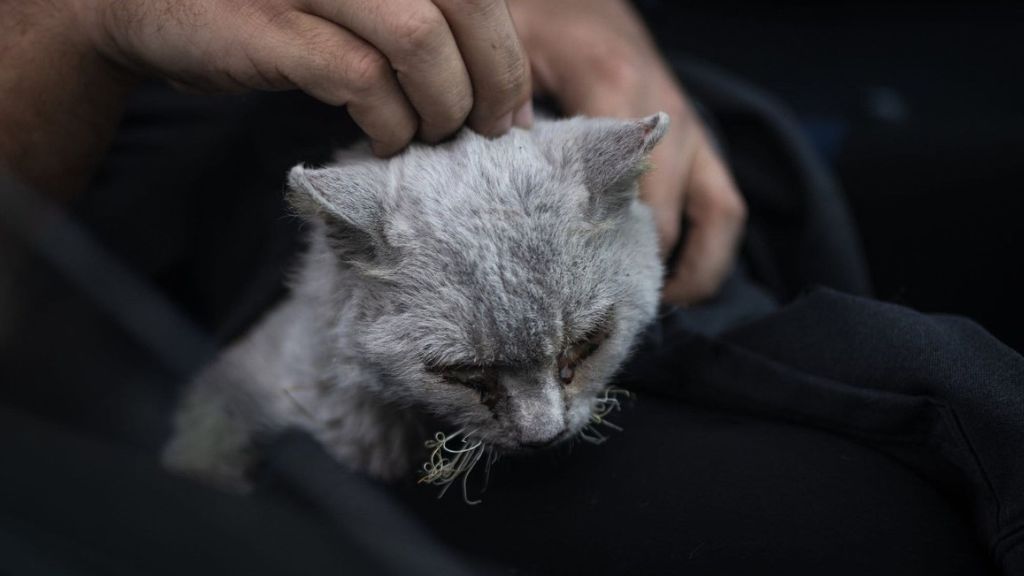 A badly burnt cat had its whiskers frazzled and paws charred before being rescued. The injuries were caused by the animal wandering the Spanish island of La Palma under a volcanic ash cloud.

The cat, called Magma, was hurt, but survived the ordeal. Its whiskers were partially burnt off by the high temperatures on the Canary Island of La Palma, where the Cumbre Vieja volcano has been spewing ash and lava since Sept. 19.

In footage shared on Nov. 4 by the local animal-rights organization Leales.org, the white cat is seen undergoing a check-up after it was rescued by two local men, Carles Rabada and David Melero. The two rescuers named the cat Magma, according to Leales.org.

The cat’s white fur has been dirtied by the steady stream of ash gushing from the volcano. The feline wandered aimlessly on the island for several weeks, covered in ash and inhaling the toxic fumes from the eruption, according to Leales.org.

The charity said cats are ignored by the local government and are essentially “invisible,” despite the large number of them struggling to survive on the island.

The video shows Magma treated by vets. The cat had several examinations, including one on its eyes, which had been affected by the ash and fumes.

In addition, the cat’s paws, burned from walking on the hot ground, were wrapped by the vet to aid recovery. Magma was fed before being put in a cage with a thick blanket to rest and recover.

Leales.org has been advocating for better protection of pets on the island since the eruption began. It is calling on local government to dispatch drones to monitor the location and status of abandoned pets while prepping plans to rescue distressed animals.

Leales.org has launched a GoFundMe page to cover the vet bills of the animals rescued from the island. Donations can be made here. The organization is also looking for a loving family to adopt Magma.

The volcanic eruption caused thousands of people to be evacuated in the last seven weeks. Thousands of homes were also destroyed.

Ash clouds have also been disrupting flights, and authorities have urged locals to stay indoors as the fumes from the volcano blanket parts of the island.

More than 100 small earthquakes have been recorded daily by the authorities in the last few days.