VIDEO: Fat’s Some Lunch: Giant Anaconda Got Stuck In The Jungle After Swallowing Its Prey Whole

Officers freed the huge snake, but its belly was so bloated it could only float on the river. 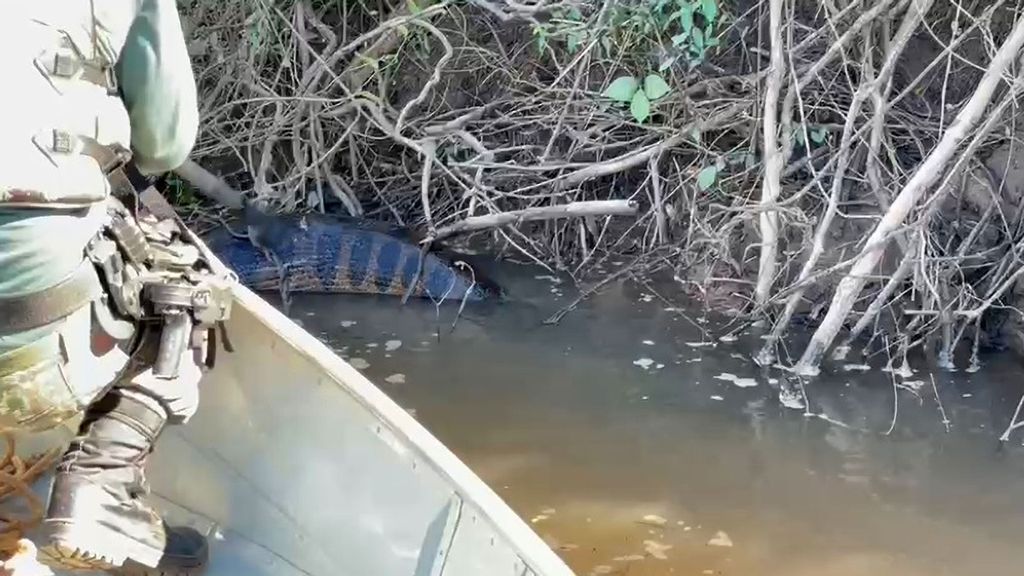 An Environmental Military Police officer rescues a nearly 16.5-foot anaconda trapped in branches after feasting on an unidentified large animal in Brazil. (PMMS/Zenger)

An overstuffed anaconda was rescued from a river in southwestern Brazil after it got trapped due to the unidentified large prey it had ingested.

Video shows an officer from the Environmental Military Police of Mundo Novo on a boat using a spade to prod and free the giant anaconda that was trapped in some riverside branches.

The nearly 16.5-foot anaconda was spotted in the Iguatemi River as the officer and his team were on an inspection patrol to prevent fishing in the city on Nov. 2, according to a statement from the Military Police of Mato Grosso do Sul state.

The video shows the anaconda with a huge bulge in its middle after having consumed a large animal.

“Anacondas feed on large rodents, deer, fish, peccaries, capybaras, tapirs, turtles, birds, dogs, sheep, aquatic reptiles like caiman, and even jaguars,” according to the nonprofit Rainforest Alliance. “After asphyxiating their prey, they are able to unhinge their jaws to swallow their prey head-first and whole, regardless of size,” the alliance says on its website.

The military police said a branch had to be cut to release the snake. It is not clear which of the four species of anaconda is seen in the latest video. However, it appears that it may be a green anaconda.

It is not clear what animal the anaconda had eaten, but in another incident in September, an anaconda was found to have ingested a whole capybara, the largest living rodent.

In August, a tour guide in Brazil filmed another anaconda shedding its scales.

Experts recommend that people keep their distance from anacondas.

The non-venomous green anaconda is listed as a species of “least concern” on the International Union for the Conservation of Nature’s Red List of Threatened Species.

They live in the forests, savannas and wetlands of Colombia and Brazil, and in the Amazon Basin.

“One of the largest snakes in the world, the green anaconda can reach impressive proportions — over 30 feet in length, 12 inches in diameter and more than 550 pounds,” according to the Rainforest Alliance.

“Unlike many animals, female anacondas are considerably larger than their male counterparts. Green anacondas are a dark olive-brown with large alternating black spots running down their backs and smaller oval spots with yellow centers along their sides. Their eyes and noses are perched on top of their large heads, allowing them to breathe and see their prey even when submerged in water.”