Phone giant joins NASA mission to mine ice on the moon by supporting communications between machines and bases.
By Peter Barker November 4, 2021
Facebook
Twitter
Linkedin
Email 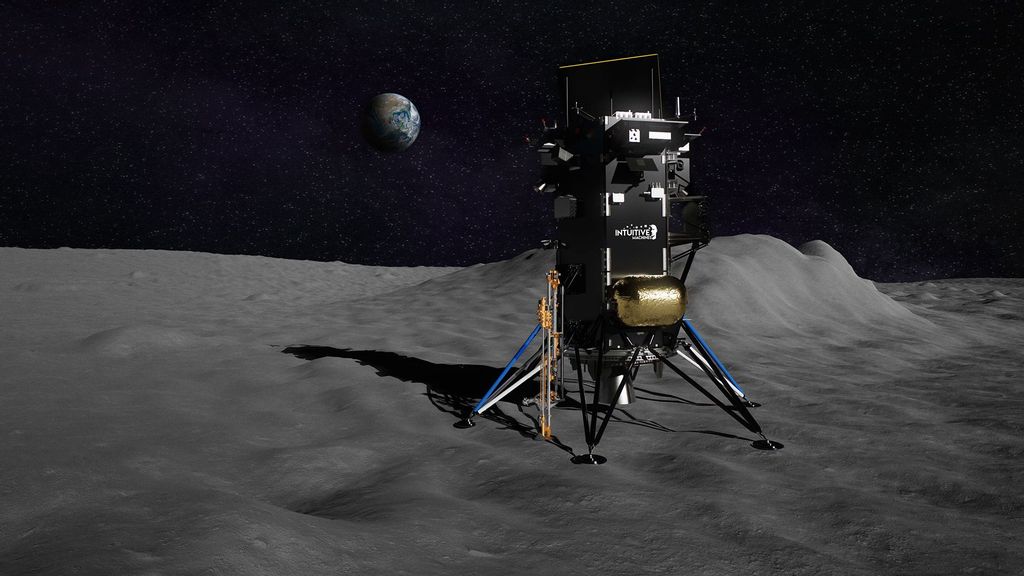 Illustration of Intuitive Machines’ Nova-C lander with a depiction of NASA’s Polar Resources Ice-Mining Experiment-1 (PRIME-1) attached to the spacecraft on the surface of the moon. (Intuitive Machines/Zenger)

NASA has announced that next year it will deliver an ice-mining experiment to the moon in the first attempt to find and extract resources from the lunar surface.

The development of space-mining technology will be critical in establishing a long-term presence in deep space, NASA said, detailing the mission in a Nov. 3 statement.

The robotic lander with the connected ice-mining technology will spend 10 days near the Shackleton crater. The location was chosen after months of analysis by spacecraft now circling the moon. The area receives a lot of sunlight, which will help power the robot. It also has a line of sight with Earth, which means the machine will be in constant communication with its operators.

The mission is designed to demonstrate three technologies: “the NASA-funded Polar Resources Ice-Mining Experiment-1 (PRIME-1) — which consists of a drill paired with a mass spectrometer — a 4G/LTE communications network developed by Nokia of America Corporation, and Micro-Nova, a deployable hopper robot developed by Intuitive Machines,” the statement said.

“PRIME-1 is permanently attached to Intuitive Machines’ Nova-C lander, and finding a landing location where we might discover ice within three feet of the surface was challenging.” said Jackie Quinn, PRIME-1 project manager at NASA’s Kennedy Space Center in Florida.

“While there is plenty of sunlight to power the payloads, the surface gets too warm to sustain ice within reach of the PRIME-1 drill. We needed to find a ‘goldilocks’ site that gets just enough sunlight to meet mission requirements while also being a safe place to land with good Earth communications.”

After it lands, the PRIME-1 drill, dubbed TRIDENT (The Regolith Ice Drill for Exploring New Terrain), will try to drill to a depth of three feet into the lunar surface.

It will then remove lunar soil, known as “regolith,” and analyze it for the presence of water.

While the mining operation is underway, PRIME-1’s second instrument, the Mass Spectrometer observing lunar operations (MSolo), will study the volatile gases given off by the regolith brought to the surface by TRIDENT.

By drilling on the surface of the moon, NASA is hoping to gain valuable experience in devising long-term deep-space operations, which will depend on astronauts being able to mine ice and other elements on distant planets.

While PRIME-1 investigates the material below the moon’s surface, Nokia will test its lunar 4G/LTE network.

Nokia’s network will be tested by a diminutive rover made by Lunar Outpost, which will venture across the lunar surface, putting over a mile between itself and the Nova-C lander before testing the signal. It will communicate with the lander, which will then communicate the data to Earth.

Nokia’s network will be developed so that machines on the surface of the moon can communicate with each other over long distances. The network is expected to enable high-definition video streaming between astronauts, base stations and vehicles.

While Nokia is testing its network and PRIME-1 is mining for ice, Micro-Nova will be sent into a close-by crater to take pictures and gather scientific data. It will then send the data back to the Nova-C.

«Previous Post
Why The Global Supply Chain Is Broken And How To Fix It»Next Post
Vienna Museum Finds 33-Million-Year-Old Fossils, Lost In Storage 150 Years Ago