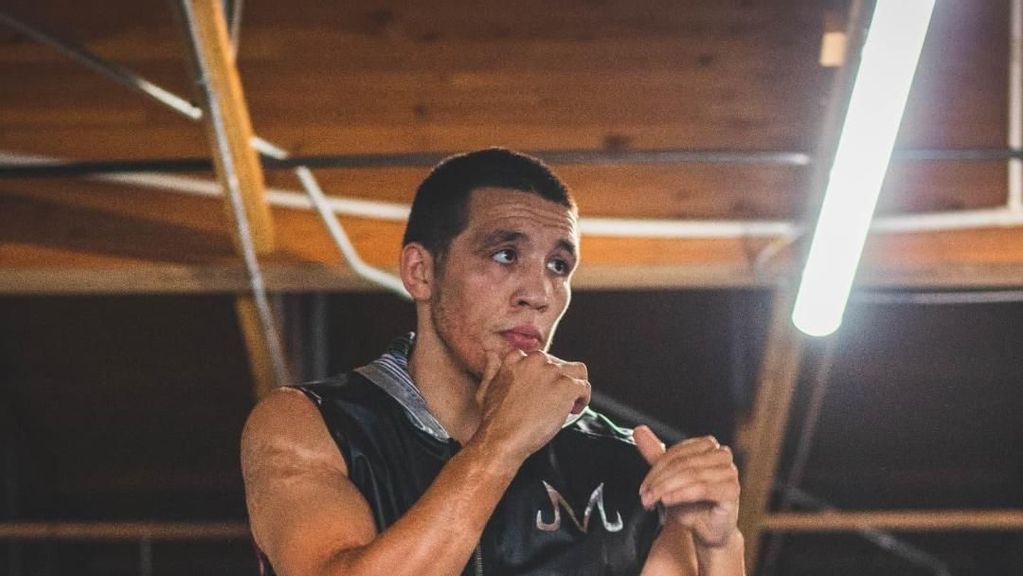 “You’re only as good as your last performance,” a boxing saying holds. In the case of Marcos “Madman” Hernandez, he is still riding the high of his last performance and doesn’t plan on coming down anytime soon.

In September, Hernandez defeated then-unbeaten Jose Armando Resendiz. However, his work will be cut out for him when he faces Anthony “The Dog” Dirrell on Saturday night’s PPV card in a co-main event for the showdown between 168-pounders Caleb Plant and Saul “El Canelo” Alvarez.

Understanding that Dirrell (33–2–2) is his most established and accomplished foe to date, Hernandez looks to string together a pair of victories, something he hasn’t done since 2018. Although his record is (15–4–2), Hernandez said he hasn’t been as consistent as he needs to be in order to be considered a legitimate contender.

That all could change Saturday night with a successful outing against the former two-time super middleweight champion Dirrell. However, Dirrell will be hungry and looking to bounce back from a split draw in February against Kyrone Davis.

Hernandez checks in with Zenger just days before his scheduled showdown with Dirrell to discuss his training camp, the magnitude and importance of this fight and much more.

Zenger: Saturday night will be your third fight of the year, so apparently you didn’t get the memo that this is an inactive era in boxing.

Hernandez: (Laughing). I have never turned down a fight. I don’t compare myself to others. I just do my own thing and I have never said no to a fight. If a fight gets to me through whoever it needs to get through, through my coach or whoever, I’m going to say yes. My coach won’t even tell me about fights sometimes, the dumb ones that doesn’t make any sense for me because he knows I’m going to say yes. It’s good that I got people that block bad situations for me.

Zenger: You will be facing Anthony Dirrell this Saturday (Nov. 6) on the Canelo Alvarez-Caleb Plant card. This is a huge opportunity for you. How have you prepared to face him?

Hernandez: I’m working hard to be my best self. I know that he is a two-time former champion, so he is definitely the most accomplished fighter I have fought. He has done a lot of things in his long career. I’m grateful for the opportunity, and I’m looking forward to being my best because I’m going to need to be my best to beat him.

Zenger: It seems as if right when the boxing world wants to write you off, you get a spectacular win to keep yourself in the mix. Your last performance against unbeaten Jose Armando Resendiz is a prime example of that. You dropped two in a row, fight Brandon Lynch to a draw, and then defeat a 12–0 fighter.

Hernandez: I’m undefeated versus the undefeated. I don’t know what that’s about, but I feel like when my back is against the wall a little bit, it just brings something out of me. I gotta be more consistent with my performances. I want to be at my best every fight, and I haven’t. I plan to be at my best for this fight. I know this is a big opportunity, and a win would provide more opportunities and lead to even bigger things. That’s what I’m looking forward to, being my best for this fight, and letting that open doors.

Zenger: Your record is deceiving. Dirrell is coming off a draw against Kyrone Davis. Do you feel you were picked as an opponent as a confidence-booster for Dirrell, or was this the fight that just made sense for both parties?

Hernandez: I don’t think I was chosen to boost his confidence. I do think the fight was made for certain reasons. I got the call because they knew that I would say, yes, like I explained earlier. When it came, I was grateful. I’m excited to get it, and I’m going to do my best to win Saturday.

Zenger: To be in a position to steal some of the fans and many eyes that Alvarez draws, how have you approached that aspect of this event? Are you treating this as if it’s just another fight, or do you want to be fueled by the magnitude of the event?

Hernandez: That’s a tough question to answer. I understand what type of opportunity this is. I’m not dumb. I’m going to make the most of it. I was really motivated before I knew I was the co-main. I was happy when I got the call with the details. I’m not sure how to answer that, but all I can say is, I am training as hard as I can, and I will be ready and be at my best on Saturday.

Zenger: We have seen Anthony Dirrell box from the outside, mix it up on the inside and be a dog when needed. What type of fight are you expecting from him?

Hernandez: He’s definitely versatile. I feel like I’m also versatile. I feel like we are different fighters, but versatile when needed. He’s a good boxer that brawls when he needs to. We’ll see. I got a game plan that I want to execute. We will see what he comes with and what he brings to the fight and go from there. If we gotta adjust, we will and be ready for anything.

Zenger: He’s had several head clashes during his fights. Does that concern you any?

Hernandez: I don’t really think about that. I’ve only been cut once, and it wasn’t a big deal. I didn’t really notice it during the fight. You notice it afterwards, but who cares by then? I’m not worried about it. I know he’s had some trouble with that in the past, so if I cut him … with a punch of course, cool.

Zenger: Dirrell has been televised a lot throughout his career. Is he someone you have watched a great amount of footage on?

Hernandez: I’m a big boxing fan. I know I’m a fighter, but I am a big boxing fan. I watch a ton of fights. I’ve definitely been watching him for a long time. I remember him beating Sakio Bika back in the day. I watched that live. They had a few rough fights. He’s been around for a long time. I’m grateful for the opportunity to fight him. I’ve studied some more recent fights. I figure fighters improve from what they showed in previous fights. I always expect fighters to be at their best and not at their worst.

Zenger: He doesn’t switch as much as his brother, Andre, but he does switch between orthodox and southpaw at times. Have you prepared for both?

Hernandez: Yeah, we got a guy built similar to Anthony in the gym, and he’s been giving me a lot of good work, and he switches, so it’s perfect sparring. If he switches, we’re ready for it. We are ready for whatever he brings.

Zenger: For anyone watching you for the first time on Saturday night, what can they expect? What do you offer?

Hernandez: I’m exciting! I don’t think I’ve ever been in a boring fight. I have had like 10 televised fights, and they have all been fun to watch. I plan on performing to the best of my abilities and winning this fight Saturday, and I don’t expect it to be boring.