Easely Lover: Artist Painted Woman Of His Dreams — Then Married An Exact Lookalike

Ahad Saadi created a portrait of his ideal woman, but was astonished when the real thing appeared at his art exhibition. 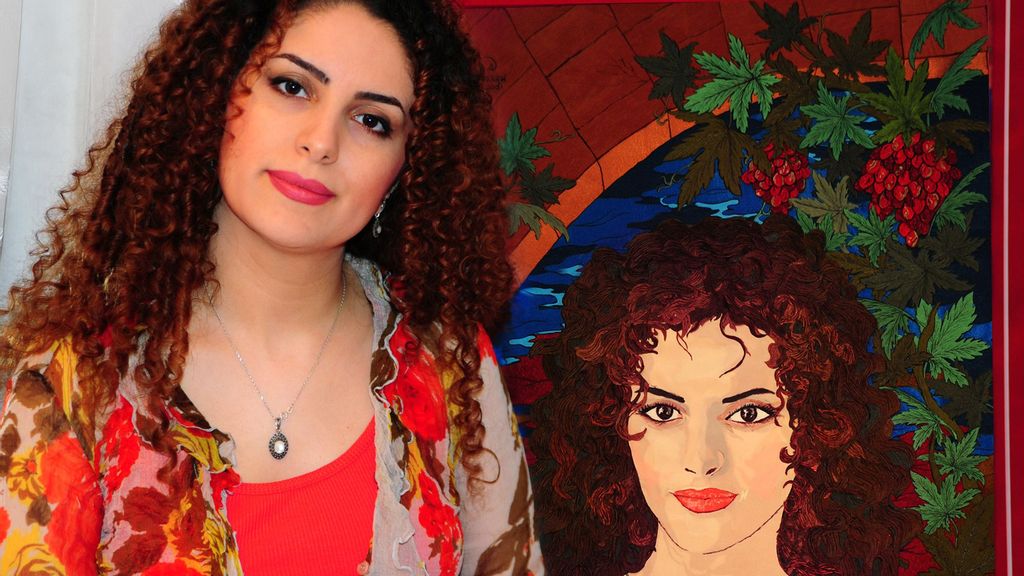 Iranian artist Ahad Saadi painted the woman of his dreams in 2009 — then he met Parisa Karamnezhad (pictured), who resembles the portrait. (Ahad Saadi/Zenger)

An artist painted a portrait of his dream woman a year before he met his wife — who looks exactly like the woman in the painting.

Ahad Saadi said in an interview that his mother had been pressuring him to get married, so in 2008, he decided to paint his ideal woman.

The successful artist created a branch of art known as Azarnegari, which involves burning fabrics with fire.

He completed the portrait of his future wife and then displayed it at the Huner-Mukaddes Gallery, which means “holy art,” in Tabriz, Iran, at the end of 2009.

During the exhibition, fellow artist Parisa Karamnezhad was shocked to discover the work. She felt as if she was looking in a mirror. Little did she know it had been painted by her future husband.

Ahad said: “When I saw Parisa in my exhibition for the first time, both the excitement and the flutter of my heart gave me a feeling I had never experienced before. It was an indescribable feeling.”

Parisa said: “One evening, my boyfriend Kave called and said there was an extraordinary exhibition, and we should go. At first, I didn’t want to go. When Kave insisted, I accepted.

“When we walked into the exhibition, Ahad was drawing attention because he was the artist. At that moment, I realized a woman next to Ahad was looking at me and touching his arm. She said something to him, and Ahad looked at us with searching eyes.”

Parisa and Kave began to look at Ahad’s work, which she described as “truly impressive.

“After passing in front of a few paintings, we arrived at the portrait that changed my life. A portrait of a smiling woman with curly hair.

“We froze in front of the portrait for a few seconds. I felt a strange closeness. I turned to my boyfriend and asked: ‘Does this portrait look like me?'”

He replied “kind of” and walked off, but Parisa could not move. She fixated on what looked like a near-perfect reflection of her face, eyes and long curly hair.

Parisa left the exhibition unable to stop thinking about Ahad and his painting, and spoke to a friend about it shortly after. “She was more excited than me, and she wanted to know what was going on,” she said.

The following day, Parisa went back to the exhibition along with her friend and met Ahad, who greeted them as they walked through the door. Parisa took her friend to see the painting while Ahad attended to his other guests.

Her friend said: “I don’t know what the story of this painting is, but this man is madly in love with you.”

Parisa and her friend left the exhibition — did not see Ahad again for 18 months. But Ahad eventually found her on Facebook and reached out. By this time, Parisa had left her boyfriend and she agreed to have dinner with Ahad.

Parisa said when he saw her, they hugged tightly, and he whispered in her ear: “You don’t know how much I love you.” Ahad, who had only seen Parisa twice in his life, proposed to her during the dinner date.

Parisa was taken aback by the proposal and said she needed time to think about it. But the next day, she contacted Ahad and said yes.

Her mother could not believe Parisa was marrying someone on such short notice, but after hearing the events that led to the decision, her mom “sighed in relief and was deeply touched by the story.” Ahad’s mother was also pleased.

Both Parisa and Ahad say meeting each other was one of the greatest moments in their lives, and they have never been happier since getting married.