The drug lord’s capture hits the Gulf Clan’s structure, but the cartel will remain in business, experts say. 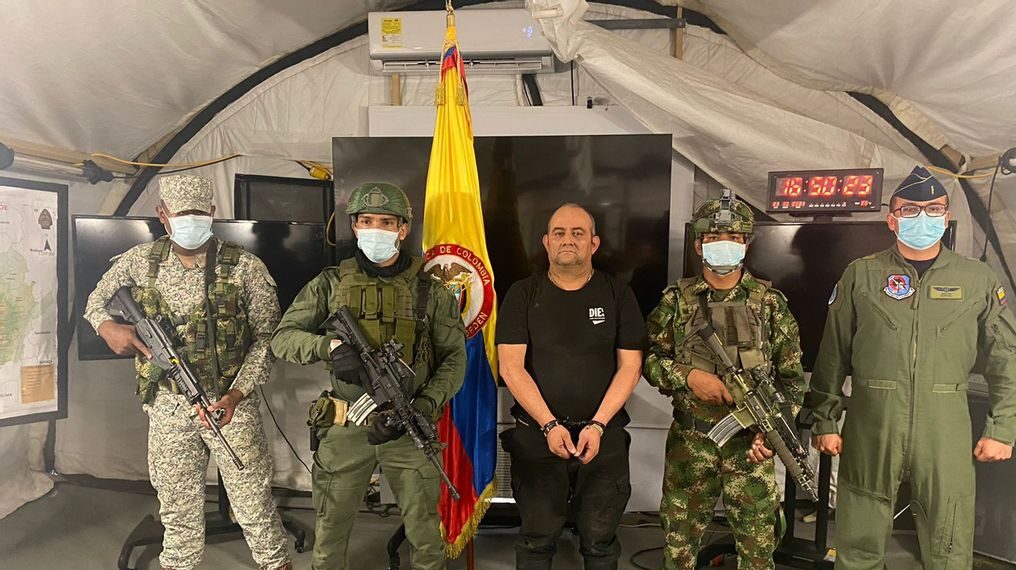 Dairo Antonio Úsuga David, aka Otoniel, the head of the Gulf Clan cartel, was captured in Antioquia, Colombia. Two New York courts await his extradition to try him for conspiracy and cocaine trafficking.  (Karen Salamanca/Courtesy of Colombia's Mindefensa)

The capture in Colombia of Dairo Antonio Úsuga David, aka “Otoniel,” the head of the Gulf Clan cartel, was a targeted blow to international drug trafficking. Two New York courts await his extradition to try him for conspiracy and cocaine trafficking.

But national security experts told Zenger that the crime lord’s arrest would not spell the end of the cartel. The organization responsible for 80 percent of the cocaine that Colombia exports to America has an army of about 1,900 men scattered through strategic areas in Colombia, including Nariño, Cauca, Valle del Cauca, the Venezuela, Ecuador and Panama borders, and the Caribbean coast.

Otoniel was captured at the Paramillo Massif in the northwestern province of Antioquia. At that time, he had 128 arrest warrants, seven convictions, several Interpol red notices, and an extradition request from the United States, which offered a $5-million reward for information on his whereabouts, according to the Colombian Anti-Narcotics Police.

From the Tolemaida military base in the central province of Cundinamarca, Colombia’s President Iván Duque said on Oct. 23 that Otoniel was seized during a “joint and meticulous operation” named Osiris. The leader of the Gulf Clan is 50 and has 34 years of criminal experience.

Duque said that Otoniel’s arrest “is the hardest setback that drug trafficking has dealt with in this century in our country. We can only compare the blow to the fall of Pablo Escobar in the 1990s.”

The drug business will keep working

Oscar Julián Palma, a national security expert and professor at El Rosario University, told Zenger that the capture of the Gulf Clan’s leader was “a great blow. … Otoniel was one of the most sought-after in the country. He is a drug lord.”

From his perspective, the arrest “is an achievement of the Military Forces, their operations, intelligence, processes, and fight against organized crime, none of which can be ignored.”

But the drug lord’s arrest “will neither affect the Colombian nor the international drug market. Cocaine flows will continue. It will still be produced, exported, and consumed in foreign markets,” said Palma.

“The impact is still meager, and yet we cannot ignore the fact that Otoniel was captured,” he said.

“The Gulf Clan’s structure has been unquestionably hit. What remains untouched is the drug business, which depends on several factors: demand, the Colombian government’s lack of control of its land, and corruption,” Franco told Zenger.

In his opinion, the drug trafficking business can continue to operate because its chain remains unbroken: there are people harvesting coca leaf, making cocaine, distributing it, selling it, and finally consuming it. The Gulf Clan leader’s detention will not affect the work of cartels in Mexico, the United States and Europe.

“I believe this will impact more the Gulf Clan than the overall drug business and [Colombia’s] security,” said Franco. He explained that things may change in the country if the government increases its capacity to control the land and works on a comprehensive strategy to impact the whole chain, which is not happening today.

He recalled the case of drug lord Pablo Escobar, who died in a police operation in Medellín on Dec. 2, 1993. The authorities managed to dismantle the Medellín Cartel at that time, but drug trafficking did not stop.

The Colombian National Army reported in a statement that it seized 146.8 tons of cocaine hydrochloride and 46.2 tons of marijuana in the Pacific area this year, hitting the finances of drug traffickers by approximately $5 billion.

Extradition and truth for the victims

President Duque made it clear that he would work to guarantee Otoniel’s extradition to the United States. Otoniel should appear before two New York courts to answer for conspiracy, murder and cocaine trafficking.

The drug lord knows about narcotic flows, routes, amounts of trafficked drugs, and people involved in the business. This information is “of interest to U.S. authorities, which face a public health crisis due to drug use,” Palma told Zenger.

Palma said that even if extradition is a valuable instrument for Colombia-U.S. bilateral relations, “we should consider the benefits that Otoniel and other extradited drug lords receive there [in America] and the information that the country of origin loses when carrying out the extradition.”

“The level of corruption in Colombia’s prison system allows [drug lords] to run their businesses from jail. The best way to avoid that is to extradite them. But doing it has consequences on victims’ rights in Colombia and many other issues,” Franco said.

Otoniel’s primary operation center was the Urabá area. Gerardo Vega, a defense attorney for farmers who have been dispossessed of their lands by organized crime in Urabá, said that if the drug lord is extradited to the United States, the Colombian government must guarantee comprehensive security for the region’s civilian population.

After Otoniel’s arrest, Urabá experienced “a tense calm. There are tensions, pressure, and attacks on the authorities. Citizens are waiting, and that is why the government must guarantee the population’s integrity and safety in the face of possible threats and retaliation by the Gulf Clan,” Vega told Zenger.

“If the extradition is carried out, the government must ensure that Otoniel speaks the truth of what he knows as the leader [of the Clan]. … The Gulf Clan has long hit the Urabá region, its population,” he said.

He was emphatic about the importance of the truth “to prevent impunity. Urabá has always had an apparatus of criminal power behind the desks, which has benefited from acts of war.”

Human Rights Watch Director for the Americas José Miguel Vivanco congratulated President Duque for the arrest and joined those who support the right of Otoniel’s victims to know the truth.

“Otoniel must be held accountable for the hundreds of crimes committed under his command. The victims deserve justice,” Vivanco said on Twitter.

«Previous Post
Viva Mexico! Canelo Alvarez Is On The Verge Of Becoming His Country’s Greatest Boxer Of All Time»Next Post
Parents Charged With Manslaughter After 2-Year-Old Daughter Dies From Fentanyl