WikiLeaks founder has been in prison in England since 2019 for failing to appear in court. He faces extradition to the U.S. 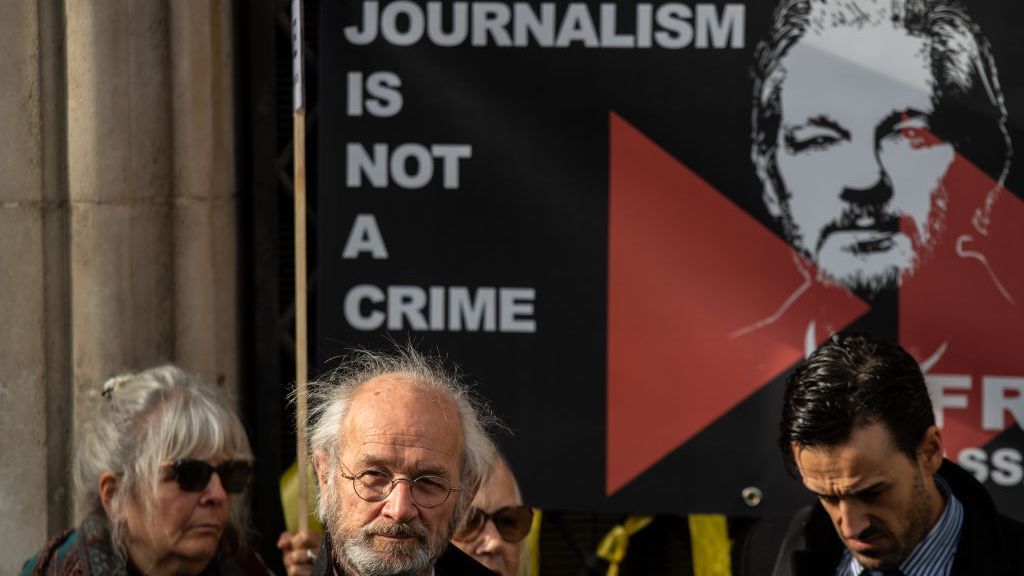 John Shipton, father of Julian Assange, outside the Royal Courts of Justice in London on Oct. 27 during an appeal hearing for Assange's extradition to the United States. (Chris J Ratcliffe/Getty Images)

WikiLeaks founder Julian Assange has been appointed an honorary member of the German PEN Centre, a writers association that fights for freedom of expression.

The center also called for authorities in England not to extradite Assange to the United States, where he faces up to 175 years in prison. The PEN center asks for his immediate and unconditional release in a statement issued on Nov. 2.

The United States is seeking extradition of Assange for releasing classified documents via Wikileaks in 2010.

Assange was imprisoned in the U.K. in 2019 for failing to appear in court

“Assange has been in solitary confinement in London’s maximum security prison in Belmarsh since April 2019, after applying for asylum at the Ecuadorian embassy in London in 2012 and living there as a political refugee for almost seven years,” the German PEN Centre said.

“It contradicts the right to freedom of expression and therefore the charter of the international PEN. We assure him, like our other honorary members, of our unlimited solidarity,” said Ralf Nestmeyer, vice president and Writers in Prison representative of the German PEN Centre.

“The appointment as an honorary member of the German PEN center is linked to the concern for the health of Julian Assange, whose prison conditions are described by Amnesty International as torture. The arbitrariness of the judiciary and the deprivation of liberty of Assange are a monstrous violation of human rights — and this happens in the midst of a Western European democracy and not in a despotic regime. The German PEN center takes the allegations of sexual assault seriously.”

Two women in Sweden accused Assange of rape/sexual molestation in 2010. Assange sought refuge at the Ecuadoran embassy in London in 2012. Swedish prosecutors dropped their investigation of the alleged rape in 2019.

“The German PEN center takes the allegations of sexual assault seriously, but we are also aware of the doubts expressed by Nils Melzer, the U.N. special rapporteur on torture, about these accusations and the risk of their inadmissible instrumentalization,” the center said.

PEN Centre Germany is part of PEN International, which was founded in London in 1921. One of its primary goals is to fight for freedom of expression.

Assange has been detained in Belmarsh Prison since April 2019 after spending almost seven years at the Ecuadorian embassy in London.

“We call on the competent authorities in England not to extradite our honorary member Julian Assange to the United States of America … but to release him immediately and unconditionally from prison,.” Nestmeyer said in the German PEN Centre’s statement.

“His continued detention is purely political and is therefore neither acceptable nor justified. It contradicts the right to freedom of expression and therefore the charter of the international PEN. We assure him, like our other honorary members, of our unlimited solidarity.”