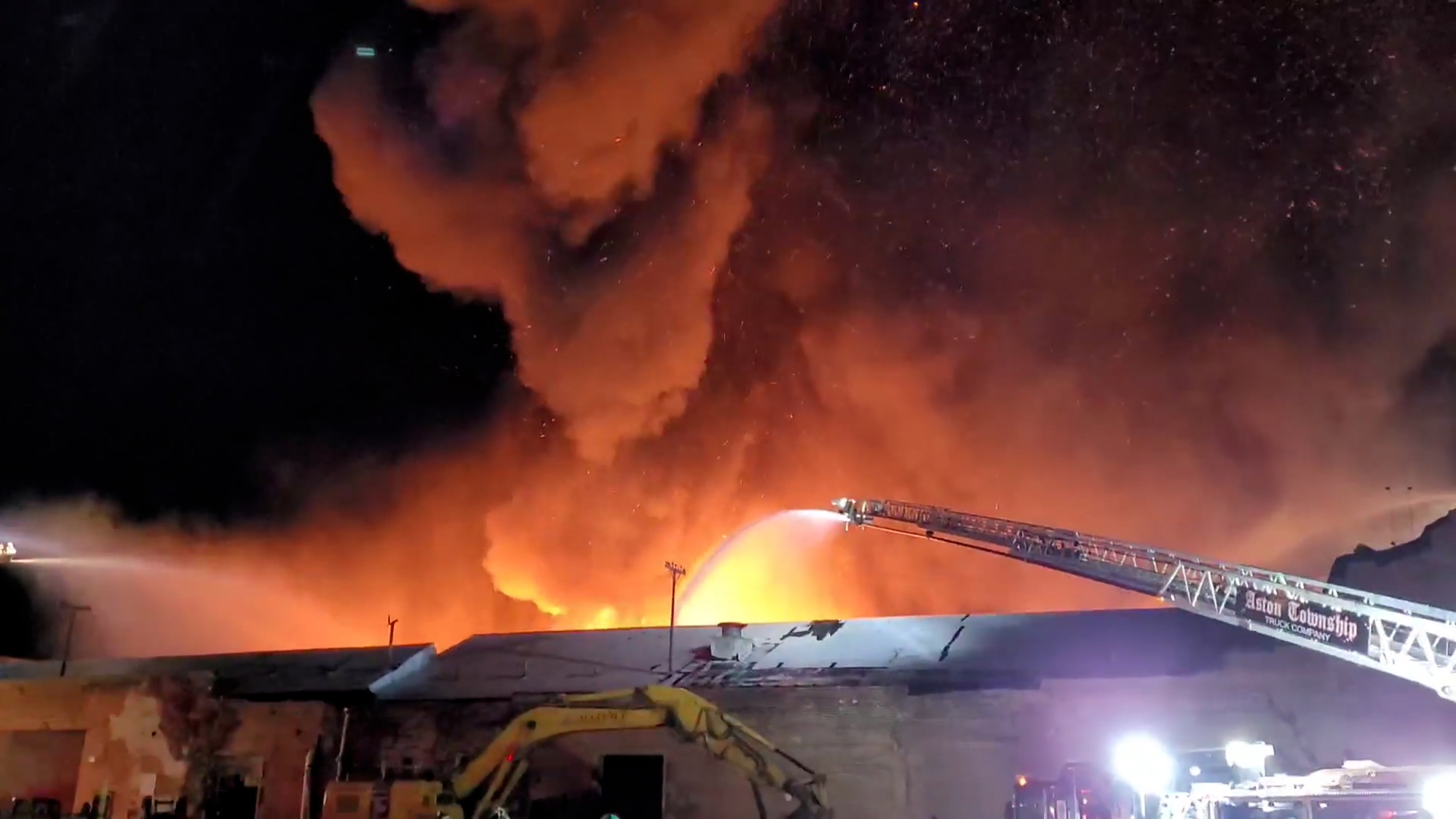 Fire Departments from Delco, Chester and New Castle County in eastern Pennsylvania battling the inferno at the Marcus Hook Warehouse in Delaware County on Nov. 1. (@DelcoDES/Zenger)

Firefighter crews battled to contain a massive warehouse blaze in eastern Pennsylvania on the night of Nov. 1.

The incident took place in Marcus Hook, a borough in Delaware County, Pennsylvania, and was characterized as a four-alarm fire. The number of alarms indicates how many firefighters and vehicles are dispatched and the severity of the blaze.

Video footage shows large plumes of smoke rising from the buildings as the warehouse burns. Firefighter trucks can be seen spraying the fire with water from extended ladders.

The images also show the large apparatus deployed to tackle the blaze, with firefighters from different fire stations coming together to respond to the incident.

The footage was shared on social media by Delaware County Emergency Services in a series of video posts, along with updates notifying the public of its progress.

The Delaware County Emergency Services posted its first piece of footage saying: “Major emergency in Marcus Hook as a multi-alarm fire is underway on 10th Street.”

A few hours later, it posted an update in which it said: “The fire in Marcus Hook continues to rage. Residents are urged to remain inside as the smoke is drifting through the neighborhoods nearby.”

A fourth piece of footage was captioned: “The equivalent of a 4th alarm fire continues in Marcus Hook and crews are expected to be on scene overnight. Fire Departments from Delco, Chester and New Castle County are battling the inferno.”

After a 12-hour silence, it was announced the blaze was successfully brought under control the morning of Nov. 2. Delaware County Emergency Services released a final update, which said: “Marcus Hook Fire, Police & Municipal officials remain on scene today following the 4 Alarm fire last evening. Crews are working on hotspots.”

The footage shows the smouldering wreckage of the warehouse, with the significant part of the fire extinguished. Firefighters will be remaining on site to prevent possible flareups.

In August, a fire in a home in New Castle County resulted in the death of one woman, while a police officer, first on the scene, was treated for smoke inhalation. That was Delaware County’s fifth fire death this year.

The cause of the warehouse fire is being investigated.