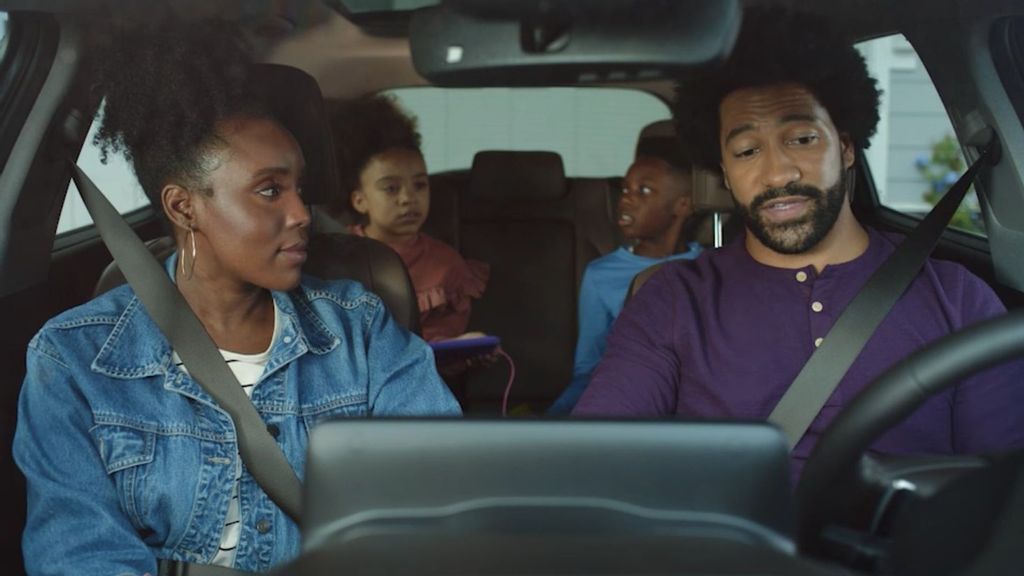 A screenshot from one of the “OKAY Hyundai” ads targeting African American consumers for the automaker's hybrid and electric vehicles. (Courtesy of Hyundai)

Hyundai Motor America hired Maryland-based Culture Brands in May to reach that market and to “be more strategic, targeted and authentic in how we communicate with African American consumers,” said Erik Thomas, the automaker’s senior group manager for experiential and multicultural marketing.

“… We look to continue to connect with people on their own terms and in relevant ways. As we increase our share of voice with the African American market and communicate successfully, we anticipate sales growth will follow.”

The “OKAY Hyundai” social media, TV and radio ad campaign, which highlights the 2022 Hyundai Tucson and Santa Fe plug-in hybrids, contains references embedded in its messaging that Culture Brands sees as part of its recipe for success.

“In the African American community, placing OKAY before something is the quintessential way things worth noticing are acknowledged,” said Eunique Jones Gibson, chief executive and creative officer at Culture Brands. “Together [with Hyundai], it’s the perfect nod to Hyundai and to our prospective buyers. See someone with a nice outfit on? OKAY outfit. See someone driving a vehicle that elevates the entire market? OKAY Hyundai.”

Reaching out to increase sales of hybrids

While Hyundai does not publicly break out sales data by audience, black consumers make up a miniscule percentage of hybrid or plug-in vehicle buyers, many analysts say. Hyundai is trying to connect to an overall African American market that accounted for $835 billion in consumer spending in 2019, according to McKinsey and Co.

Some industry watchers are applauding the “OKAY Hyundai” campaign and the hiring of a black marketing agency as a precursor to more involvement by minority-owned creative agencies.

“When you look at the top seven brands for African Americans, which include Toyota, Honda, Chevrolet, Nissan, Ford, Kia and Hyundai, all but one currently has an African American agency of record,” said Marc Bland, chief diversity officer at IHS Markit, a London-based business intelligence firm.

When Hyundai announced its partnership with Culture Brands in an effort to reach more black buyers, it said it was looking for an agency that was expert in “not only developing creative and marketing solutions for the African American target segment, but an agency that really knew about building culture.”

Culture Brands evolved from a social media campaign initiated by Gibson in 2012, following the death of Trayvon Martin, a 17-year-old black youth killed in Florida earlier that year. A year later, during Black History Month, she launched the digital platform, Because of Them We Can.

“It grew beyond a Black History Month campaign to encompass the past, present and future in black excellence, celebrating black culture and achievements 365 days a year,” said Gibson.

She said the digital platform reaches “millions of people monthly.”

Gibson, who began her online advertising career with Microsoft, and produced campaigns for such brands as Warner Bros., American Family Insurance, Nickelodeon and the Green Bay Packers, formed Culture Brands in 2017. She said much of the content created for the “OKAY Hyundai” campaign will be “amplified” using the Because of Them We Can platform.

“Our team takes special care in the placement of branded messaging to ensure credibility,” Gibson said. “With this new opportunity with Hyundai, [we] can house corporate, vehicle and themed content.”

The automotive industry, according to Hyundai’s Thomas, is “in the midst of an evolution” as electric vehicles slowly grab more and more market share. Electric vehicle enthusiasts point to low maintenance costs, enhanced performance over gas-powered vehicles, low cost of charging a vehicle, and quick charging times. It’s Culture Brands’ job to effectively communicate these key benefits to a black audience.

“It is expected that the market share of conventional internal combustion engines will shrink to about 20 percent by 2050, while electric vehicles are projected to account for 8 out of 10 vehicle sales.”

“We believe it’s important to educate the total market on the aspects of this evolution and how it will likely impact their car buying and ownership experience,” said Thomas.

“… There needs to be a few considerations put in place, including charging stations in urban areas where many African Americans work, live and play; new solutions like true wireless charging to accommodate African American urban living where a private garage is often not an option; and education campaigns to help the African American consumer understand why EVs are a good &mldr; and safe choice for them.”

Studies show, however, that the African American audience is somewhat indifferent to the benefits of electric and/or hybrid vehicles and the perils of climate change.

Third Way, a public policy think tank, conducted a month-long series of focus groups in Detroit, Philadelphia and Greensboro, North Carolina, in February 2020, to gain insight into these communities’ views on climate change and clean energy.

“With exception to two or three participants across Detroit and Greensboro, climate change and the environment did not surface as a top issue among focus group participants in the three cities,” said the ensuing report, titled “Black Americans Care about Climate Change (But It’s Complicated),” which was published in July 2020. “Health care, education, racism, school debt and crime were among the top priorities named in the focus groups.”

The same segment of the population is disproportionately affected by climate change, according to the nonprofit Environmental Defense Fund.  It reports that African Americans are more likely to live in communities vulnerable to severe weather and floods, experience more climate-induced heat waves, and suffer from severe medical conditions, particularly asthma, exacerbated by pollution.

“Acknowledging environmental issues that are important to various degrees to different new vehicle prospects is a universal concern,” Gibson said. “At Culture Brands, we maintain our pulse on the culture through our media platforms and consumer brands. We use these insights and learnings to create culturally relevant and affirming campaigns and content.

“The various aspects of our business provide ongoing access to African American culture. From this we derive insights, and those insights are shaped to support our clients’ brand strategies.”

«Previous Post
Two-time 168-Pound Champion David Benavidez Seeks To Be Both A Fighter And A Fortune Teller»Next Post
Louisiana Legends: There’s No Limit To Fiend’s Greatness