Critical race theory and vaccine mandates have been key hot-button issues in the campaign. 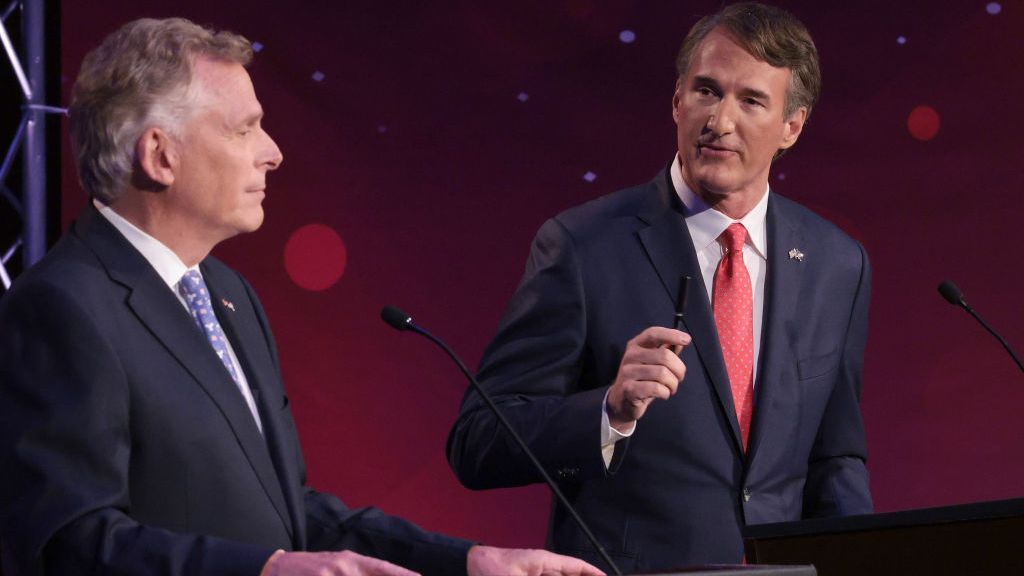 Virginia's gubernatorial race has been neck-and-neck for days, and Republican Glenn Youngkin (right) has eked out a narrow lead over Democrat Terry McAuliffe on the final day before the election Nov. 2. (Win McNamee/Getty Images)

In the final hours leading up to Tuesday’s gubernatorial election in Virginia, Republican Glenn Youngkin has eked out a narrow 1.7 point lead over Democrat Terry McAuliffe, the latest poll from RealClearPolitics shows.

For days, the race has been neck-and-neck, as Youngkin, a political newcomer, gained the endorsement of former President Donald J. Trump.

Youngkin, who was with the Carlyle Group private equity firm for 25 years before becoming its CEO, stepped down last September to seek office. He called Trump’s endorsement this past spring an “honor,” and he has gained traction among independents and anti-Trump Republicans by appealing to all sides. Though Youngkin initially refused to accept the results of the 2020 general election, he eventually acknowledged Biden as the legitimate winner.

Youngkin would be the first Republican governor in the state since Robert McDonnell was elected in 2010 for a four-year term.

McAuliffe pledged a $2 billion education reform plan that he claims would increase teachers’ salaries, address racial inequalities, eliminate the achievement gap, invest in rural communities and support careers in education. The plan builds on McAuliffe’s actions during his previous term as governor, including the expansion of the Virginia Preschool Initiative to give at-risk children access to a quality preschool education.

Youngkin’s plan focuses on “schools, students, and studies,” with an emphasis on keeping high standards for educational metrics such as standardized test scores. He has placed transparency and accountability in public schools as a high priority. Appealing to parents may have boosted Youngkin’s polling numbers, according to a poll by Echelon Insights.

Critical race theory in schools’ curriculum has been one of the top issues in the campaign. Suburban Loudoun County made national headlines over the political turmoil between the school board and parents. Protests at school board meetings against teaching critical race theory have become commonplace over the last few months, prompting school officials to request additional security from the Loudoun County Sheriff’s Office.

The last school board meeting of the 2020-2021 school year in June ended with the board walking out after hundreds of angry parents protested a new transgender policy and argued against critical race theory, an academic concept “that race is a social construct, and that racism is not merely the product of individual bias or prejudice, but also something embedded in legal systems and policies.”

Interim Superintendent Scott A. Ziegler said Loundoun County “has not adopted critical race theory as a framework for staff to adhere to.” He calls it an equity initiative to “provide a welcoming, inclusive, affirming environment for all students.”

Another Loudoun County school board meeting in June erupted as angry parents protested a proposed transgender policy Scott Smith claimed his ninth-grade daughter was sexually assaulted in the high school bathroom by “a boy wearing a skirt.” Smith was arrested when the meeting devolved into turmoil, and he was dragged outside in handcuffs. He was later convicted and given a suspended jail sentence.

Loudoun County Public Schools issued a statement saying the district “is aware of the media and social media reports concerning alleged sexual assaults at two of our high school campuses… . Consequently, members of the Loudoun County School Board were not aware of the specific details of this incident until it was reported in media outlets earlier this week.”

The issue has become another focal point of the gubernatorial campaign, with Youngkin siding with parents who claim the school district has tried to cover up the alleged assault.

McAuliffe called the allegations against the school board “Trumpian conspiracy theories.”

The two candidates squared off in the last gubernatorial debate on Sept. 28, with each accusing the other of being closely aligned with their presidential endorsers, Biden and Trump. Views on parental involvement in public education also featured in the debate.

McAuliffe’s stance is: “I don’t think parents should be telling schools what they should teach.”.

Youngkin doubled down on his pro-parent position by putting out a TV ad featuring a Fairfax County parent who advocated for legislation that requires schools to notify parents when explicit reading material is assigned, a bill that McAuliffe previously vetoed. Laura Murphy pushed to have “Beloved”, Toni Morrison’s 1987 novel about a family of former slaves, banned from Fairfax County’s English curriculum in 2013.

McAuliffe responded by accusing Youngkin of “silencing the voices of black authors” in a campaign speech on Oct 26th.

While 62 percent of Virginians have been fully vaccinated against COVID-19 (compared to 57 percent across the country), the issue of vaccine mandates has been divisive.

Youngkin said he encourages all Virginias to get the vaccine, but he opposes vaccine mandates and school mask mandates. “Youngkin has chosen to get the vaccine and believes that Virginians have the right to decide for themselves whether or not to get vaccinated based on their personal circumstances,” his website says.

McAuliffe has backed vaccine mandates and called Youngkin an “anti-vaxxer” for not supporting a mandate. McAuliffe has a “Virginia is for Vaccine Lovers” page on his campaign website, where he indicates a plan to “urge local school divisions to require vaccines for their personnel, and work to ensure health systems and nursing homes follow federal vaccine requirements.”

Attack by the Lincoln Project

In an attack in October on Youngkin’s campaign, the Lincoln Project, an anti-Trump political action committee, confirmed a stunt that posed five people as white supremacists holding tiki torches outside Youngkin’s campaign bus at a Charlottesville rally. The stunt evoked a tiki-torch march in 2017 at the University of Virginia campus in Charlottesville after a self-described neo-Nazi killed an anti-racism protester with his car.

The Lincoln Project claimed that Youngkin and the Republican Party embrace the values of the far-right Charlottesville demonstrators.

The results of this election may have implications beyond Virginia. Some believe Virginia serves as a bellwether state, a reliable indicator of midterm and presidential election outcomes. Virginia has voted for the winning presidential candidate 67.7 percent of the time between 1900 and 2020.

Although historically a “purple state” with a mix of Republican and Democratic voters, Virginia has become increasingly blue as Democrat voters move into suburban areas outside of Washington, D.C.

Political analysts question why this race is so close in a state that voted for Biden by 10 points.

“What I’m interested to see is why Virginia looked so blue in the Trump era,” said J. Miles Coleman of the University of Virginia Center for Politics. “It’s because the Democrats in this state made a lot of gains with college educated white voters. These would be these would be in your suburb and constituencies like Loudoun County up in Northern Virginia, Chesterfield County and the Richmond area.

“Whether it’s a close Youngkin win or a close McAuliffe win, that’s still not a good sign for Demcorats,” he said.

«Previous Post
Worrying Sign? As Election Nears, Democrats Rally The Faithful In Blue Areas»Next Post
Elections In Honduras Are A Test For Democracy In A Hard-Hit Nation