Hundreds of people in the crowd cheered and waved “Terry for Virginia” signs as McAuliffe welcomed Biden to the stage. 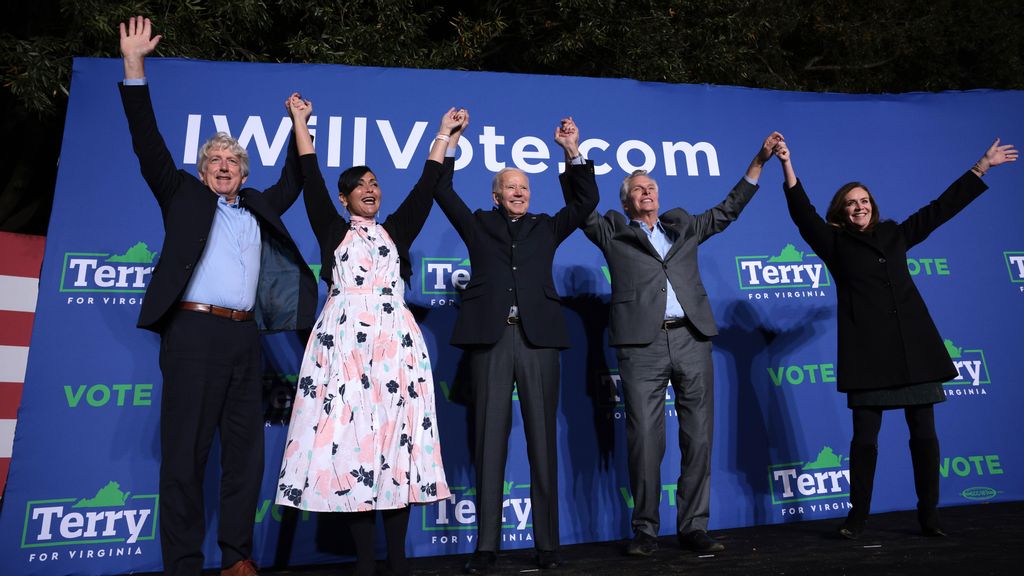 The rally’s location is a worrying sign of the Democrats’ uncertain turnout in a nail-bitingly close election to elect Virginia’s next governor on Tuesday. Typically, winning campaigns focus on swing districts farther afield from their traditional bases of support.

Pentagon City, a collection of apartment towers and high-end shops that surrounds the largest military headquarters building in the world, is closer to the White House in distance than many parts of Washington, D.C. Packed with college-educated young professionals, the area has been one of the bluest parts of Arlington County, which contributed more than 130,000 votes for Biden in the 2020 presidential election. Democratic officials, at the rally, did not explain why Biden and McAuliffe are trying to boost Democratic turnout in such proven precincts.

The polls may explain why. McAuliffe defied history when he won the Virginia governorship in 2013 — by being the exception to the longtime Virginia trend of electing a governor of a different party than the president. With that history-bucking record and his proven fundraising abilities, Democrats nominated him and confidently expected victory.

At first he enjoyed a commanding lead in the polls. But as voters began to pay attention, the race closed from a 5.5 percentage point lead for McAuliffe in the Real Clear Politics average of state polls to a 0.9 percentage point deficit. For the first time, his Republican challenger, Glen Youngkin, now enjoys a small statistical lead.

Young professionals are seemingly less excited in voting in this state’s off-year election. Biden appeared alongside McAuliffe to energize and educate core Democrat voters. Between a Whole Foods and a Boeing office building, some 2,000 Democrats gathered in Virginia Highlands Park.

“I’m here to support and make sure to build the blue wave here for November 2nd,” Jesus Rodriguez, a nonprofit employee in the crowd, told Zenger.

“I’m very worried about the status of the race being so close and I think it’s too important for Virginia not to go backwards. We’ve just recently become a blue state and I’d hate to see that change,” Cynthia Pflugh, a rally attendee, told Zenger.

At the rally, McAuliffe stuck to his stump speech. “We have a choice: A path that promotes conspiracies, hate, division or a path focused on lifting up every single Virginian,” McAuliffe said.

It was a chilly October evening, but the atmosphere was lively. Hundreds of people in the crowd cheered and waved “Terry for Virginia” signs as McAuliffe welcomed Biden to the stage.

Biden, with a half-century of campaign experience, spoke with conviction. “You don’t have to wonder what kind of governor Terry will be because you know what a great governor he was. It wasn’t just because of what he promised. It’s what he delivered,” Biden said.

The president was confronted with left-wing protestors a couple of times during his appearance. A coordinated group began chanting “Biden, Biden, citizenship now” and waving matching neon signs shortly after the president began speaking. The group was escorted out by security.

Another protestor shouted “stop line three” in an apparent reference to the recently expanded Enbridge oil pipeline that has met resistance in Minnesota. Biden was unfazed by the protestors. “This isn’t a Trump rally, we let them holler,” the president said.

Biden went on to blast Youngkin for his close ties to former President Donald J. Trump, saying that McAuliffe was running against “an acolyte of Donald Trump.”

The crowd dutifully booed at hearing Trump’s name. Will the anti-Trump energy be enough to assure Democrat’s victory? The answer will not be known until polls close at 7 p.m. on Nov 2.