The curious Turquoise-fronted Amazon put on a show for astonished camera operators in Brazil. 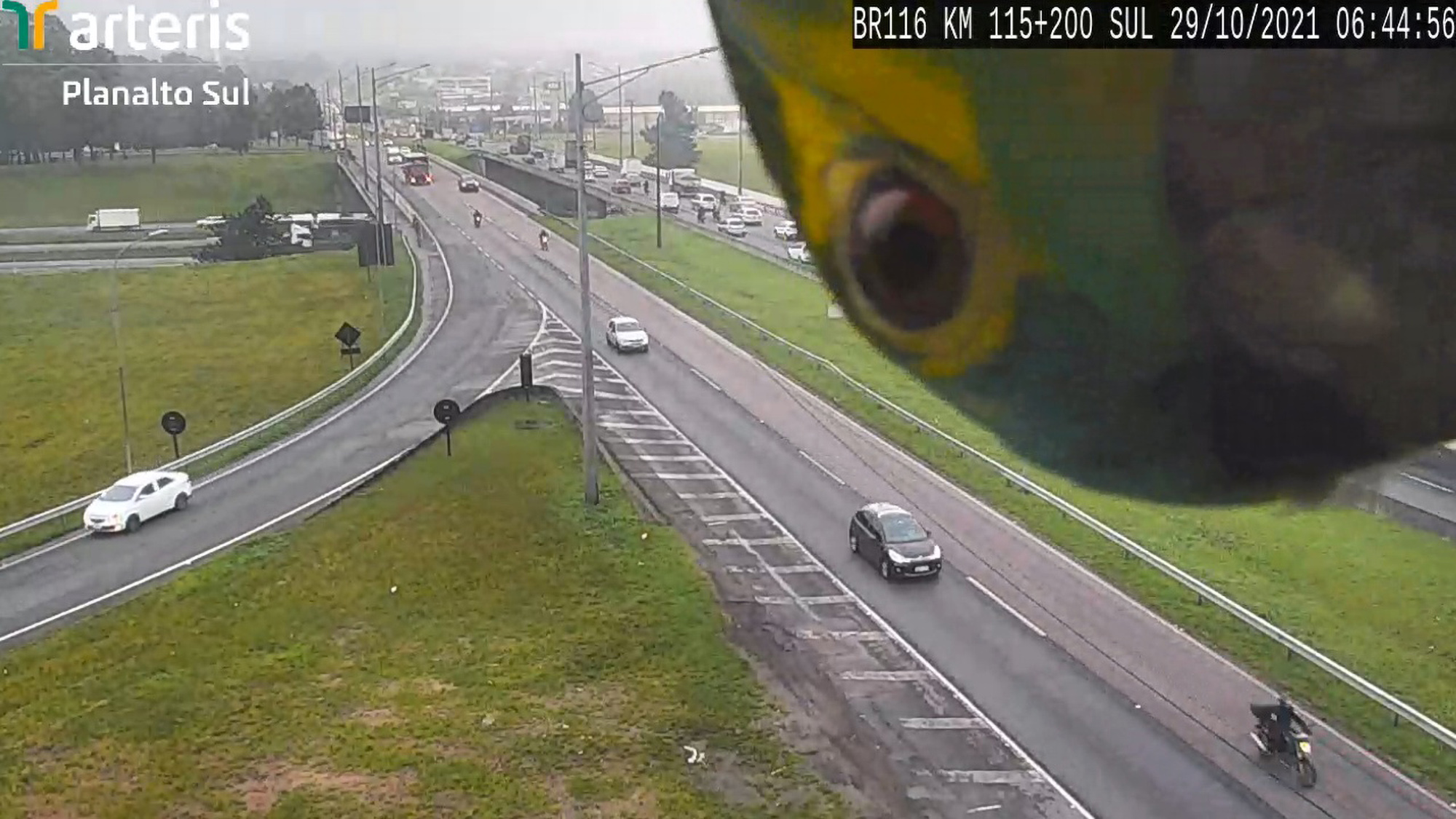 A bird identified as a Turquoise-fronted amazon was spotted on traffic cameras in Curitiba, Brazil on Oct. 29. (Arteris Planalto Sul/Zenger)

A parrot plays peekaboo with CCTV operators while sitting on a traffic camera on a busy Brazilian freeway.

The turquoise-fronted Amazon parrot, also called the blue-fronted parrot, was filmed peering into the traffic camera near the city of Curitiba, Brazil, on Oct. 29.

The CCTV system, operated by the road management company Arteris Planalto Sul, spotted the bird’s antics on the freeway and shared the footage on Twitter, where it has been viewed 262,000 times.

The state environment authority confirmed the bird’s species. While the parrot is a favorite pet in the United States, it is endangered in parts of Brazil and Bolivia, its natural habitat.

The colorful Amazon parrot measures 14 to 15 inches in length, head to tail tip, and weighs from 9.7 to 18 ounces. Its habitat is undergoing a decline, largely due to a conversion to agricultural use.

But the playful parrot is not the only bird to show an interest in CCTV highway cameras in Brazil in recent months.

Two toucans were filmed pecking at a freeway surveillance camera near the city of Campinas, Brazil, on April 18.

Footage from the traffic camera shows how the toucan appears on the railing next to the camera. About halfway through the footage, a second toucan ambles into view, and they take turns pecking at the camera with their long orange beaks.

This was the fifth such occurrence of birds being caught on traffic cameras in April, three of them taking place in Campinas, according to AutoBAn, which manages the roads.

In July, two toucans were filmed putting on a show for CCTV operators before one pecked at the camera with its beak.

The spectacle took place on the SP-348 freeway in the city of Sao Paulo on July 5.

It was remarkably similar to the previous scene involving two toucans in nearby Campinas, with one of the birds also trying to eat the camera.

Toucans are native to southern Mexico, Central America and northern and central South America. They are famed for their bright markings and large and often brightly colored bills.

They mostly live in forests, apart from the toco toucan, which is found in savannahs and open woodlands.

The toucans captured by the traffic camera appear to be toco toucans, the largest of the toucans, with their black bodies, white throats and chests and blue skin around the eye.

Given its preference for open habitats, the toco toucan has benefited from widespread deforestation in tropical South America.

«Previous Post
Sword Used By Napoleon To Gain Control Of France Set For Auction»Next Post
Not So Fruity: Plan To Pay More For Bananas