Moscow boasts of its ability to bring down ‘swarms’ of missiles and attack helicopters. 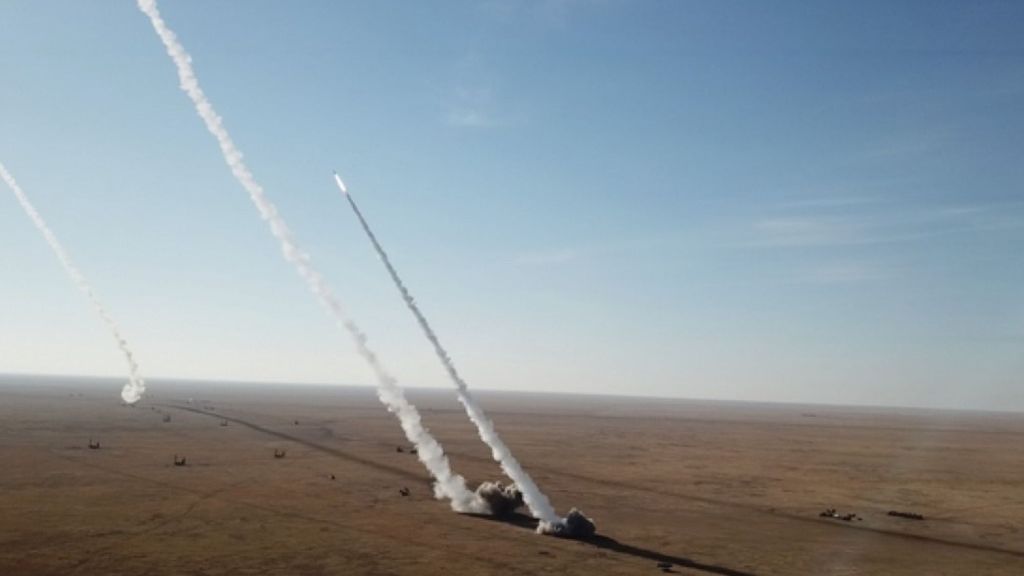 The Russian army firing advanced anti-aircraft missile systems during recent war games in the northern part of the country. (Ministry of Defense of the Russian Federation/Zenger)

Russia’s military says it has successfully put its missile-defense system to the test, by thwarting a simulated large-scale enemy aerial attack.

The military exercise was held at the Kapustin Yar range in the Astrakhan region in southern Russia. Footage of the drill was released by the Ministry of Defense of the Russian Federation on Oct. 29.

The exercise involved the use of large-scale air-defense units and anti-aircraft missile systems at long, medium and short ranges, the ministry said in a statement released a day earlier.

A large-scale simulated attack was neutralized by a layered air-defense system made up of a variety of complexes including the S-300V4, Buk-M3 and Tor-M2, the defense ministry said.

The footage shows the moment the Russian weapons complexes respond to the threat and fire several rounds of anti-air missiles.

The S-300V4 missile-defense system is considered to be one of the most effective systems of its type in the world. It costs an estimated $300 million per unit and has been sold to several militaries, including China and Turkey.

The second layer of defense was composed of Buk-M3 medium-range air-defense systems and a Tor-M2 short-range anti-aircraft missile system battalion.

The Buk missile system is a self-propelled, medium-range surface-to-air missile system developed by the Soviet Union in 1980. It is capable of bringing down cruise missiles, smart bombs, fixed- and rotary-wing aircraft and unmanned aerial vehicles. It has an operational range of 30 kilometers (roughly 18.5 miles).

The Tor system “carried out combat launches against group air targets simulating the raid of a ‘swarm’ of unmanned aerial vehicles of a conventional enemy at a distance of up to 15 kilometers (9.3 miles),” the ministry reported.

At the back of the defense system, Typhoon armored vehicles from a Typhoon-Air Defense unit were positioned to take down targets at extremely close range of under six kilometers at altitudes below 3,500 meters (11,482 feet).

More than 1,000 servicemen and 300 units of weapons and military equipment were involved in the training exercise, and all targets were successfully hit, the ministry said.

«Previous Post
VIDEO: US ‘Did Not Fail’ In Afghanistan, Legendary French Writer Says»Next Post
VIDEO: US And Japan Conduct Bilateral Operations In The South China Sea