He sees a bout with Saul Alvarez in his future, but knows he needs to first take care of Kyrone Davis on Nov. 13. 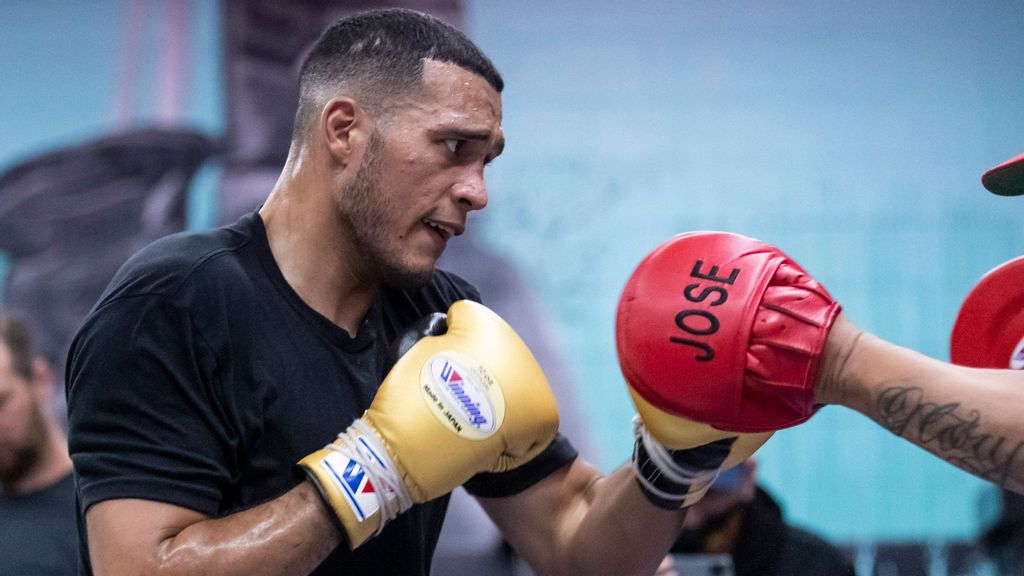 Two-time 168-pound champion David Benavidez wants to face four-division title winner Saul Alvarez in an all-Mexican clash sometime in 2022. “I’m the only one who can mix it up with Alvarez,” said the 6-foot-2-inch Benavidez. (Esther Lin/Showtime)

An all-Mexican championship bout could be in the making in the 168-pound boxing division.

But first, several things have to happen: First,  Saul “El Canelo” Alvarez needs to stop Caleb “Sweethands” Plant on Nov. 6. Then, a week later, two-time champion David “Red Flag” Benavidez says he plans to KO of Kyrone “Shut It Down” Davis. That would result in an all-Mexican Alvarez-Benavidez 168-pound championship clash sometime in 2022.

The 5-foot-8 Alvarez (56-1-2, 38 KOs) has predicted an eighth-round knockout of Plant (21-0, 12 KOs) during their unification bout on Nov. 6 at the MGM Grand in Las Vegas in a Premier Boxing Champions event on Showtime Pay Per View (9 p.m. ET). If his prediction comes true, Alvarez would add Plant’s IBF crown to his WBA/WBC/WBO versions and become the first undisputed 168-pound champion of Mexican descent.

On Nov. 13, Benavidez (24-0, 21 KOs) pursues his fifth straight knockout against Davis (16-2-1, 6 KOs) before his hometown crowd at the Footprint Center in Phoenix, Arizona in a Premier Boxing Champions event on Showtime (10 p.m. ET).

On Thursday, Davis, 26, replaced former champion Jose Uzcategui (31-4, 26 KOs), who was forced to withdraw due to a failed pre-fight drug test.

“It’s a new opponent, but nothing has changed,” said Benavidez’s father and trainer, Jose Benavidez Sr. “The plan is the same, and that’s to get a spectacular knockout. We need a knockout, especially now.”

The Benavidez-Davis bout is an IBF and WBC title eliminator that would grant the winner a shot at the winner of the Alvarez-Plant match.

“Caleb Plant doesn’t have the power or the chin to keep Canelo off of him, and I’m the only one who can mix it up with Canelo with body shots, uppercuts and combinations, and I’m a little faster, and I’m taller and longer than Canelo,” said the 6-foot-2 Benavidez, a switch-hitting 24-year-old. “Caleb hasn’t fought the type of opponents that can push him to the level of intensity and skills he’s going to face in Canelo.

“Canelo will take him into deep waters. Once Canelo starts to put his foot on the gas, it’s going to be a matter of time before he gets Caleb out of there, maybe in the sixth, seventh or eighth round. My main focus is to win this IBF and WBC title eliminator by knockout, and then I’m picking Canelo to beat Caleb Plant. After that, I can fight Canelo for all the belts.”

In Davis, of Monmouth, N.J., Benavidez faces a fighter who is 3-0-1 (1 KO) in his past four bouts. Davis’ past two fights were a draw with former champion Anthony Dirrell in February and a unanimous decision over Martez McGregor in September.

“I know I can hurt Canelo. I’m a fighter who will give Alvarez a more difficult fight than he’s ever had, like Gennady Golovkin, who mixed it up with body shots, power and punch selection,” said Benavidez, referring to Alvarez’s majority decision unification victory over then-unbeaten WBA/WBC titleholder Golovkin (September 2018) in a rematch of their draw in September 2017.

“I have great power, great jab, great body shots, and I also have speed. I’m also much taller than Canelo. My arms are much longer, and I’m younger. This is something I’ve wanted my entire life, and now, I’m at the doorstep to making this fight happen. I’m motivated to leave it out there and to make sure that I come out of the ring with no less than a victory over Canelo Alvarez.”

Once the youngest 168-pound world champion in history, Benavidez had been stripped of his WBC crown in October 2018, declared “Champion in recess,” and suspended for six months following a positive drug test for Benzoylecgonine (the main metabolite of cocaine).

The WBC made its decision at its convention, also ordering Dirrell into a vacant title fight against Avni Yildirim, whom he defeated by technical decision in February 2019.

Benavidez ended his ring absence with a second-round knockout of J’Leon Love in March 2019 before regaining the WBC crown that September with a ninth-round knockout of Dirrell, who was stopped for the first time in his career.

“Since I’ve returned from my suspension, all of my victories have been by knockout, and that will continue with Kyron Davis,” Benavidez said. “My plan is to look impressive with a stoppage somewhere between the fifth and ninth rounds.”

An overweight Benavidez lost that title on the scales in advance of a 10th-round knockout of Roamer Alexis Angulo (August 2020) before scoring an 11th-round TKO over Ronald Ellis in his last fight in March.

But Jose Benavidez Sr. insists that his son is in top shape for Davis.

“David is looking very strong right now,” said Jose Sr. “He’s gotten stronger with each fight and matures more and more. He’s just getting his man strength, so everyone will see something spectacular on Nov. 13.”

Benavidez sparred with former world champions Kelly Pavlik and Peter Quillin before he could even get a driver’s license. Benavidez also worked with Golovkin before making his pro debut in August 2013 at the age of 16, a first-round KO of Erasmo Mendoza in Sonora, Mexico.

“El Bandera Roja” (The Red Flag) won his first seven bouts by knockouts in Mexico before competing in his hometown three days after turning 18.

“I’ve been training since I was three years old,” Benavidez said. “So that’s about 21 years.”

At 20, Benavidez earned the WBC’s 168-pound title by split decision over Ronald Gavril in September 2017, overcoming an injured middle left knuckle and a final-round knockdown to become the youngest world champion in division history and the sport’s youngest titleholder at the time.

Darrin Van Horn had been the youngest boxer to win the 168-pound title when he accomplished the feat in 1991.

Benavidez ended Gavril’s seven-fight winning streak (five by KO) and won his return bout with Gavril in February 2018 by near shutout unanimous decision.

The split-decision victory over Gavril ended Benavidez’s knockout streak at 10 and at 17 in his previous 18 victories, including 13 inside of two rounds. The matches with Gavril followed Benavidez’s three-knockdown eighth-round TKO of former title challenger Rogelio Medina in May 2017.

“Canelo’s got a great resume,” Benavidez said. “He’s been fighting the best fighters and I respect him, but that’s going to mean so much to my legacy when I fight him and I beat him.”

“My fight is going to end early,” Jose. Jr. said. “I’m going to be ready to walk out with my brother and support him for his fight.”