Grisly remains found at the tomb of the ancient Egyptian king’s head of sacrifices to the gods. 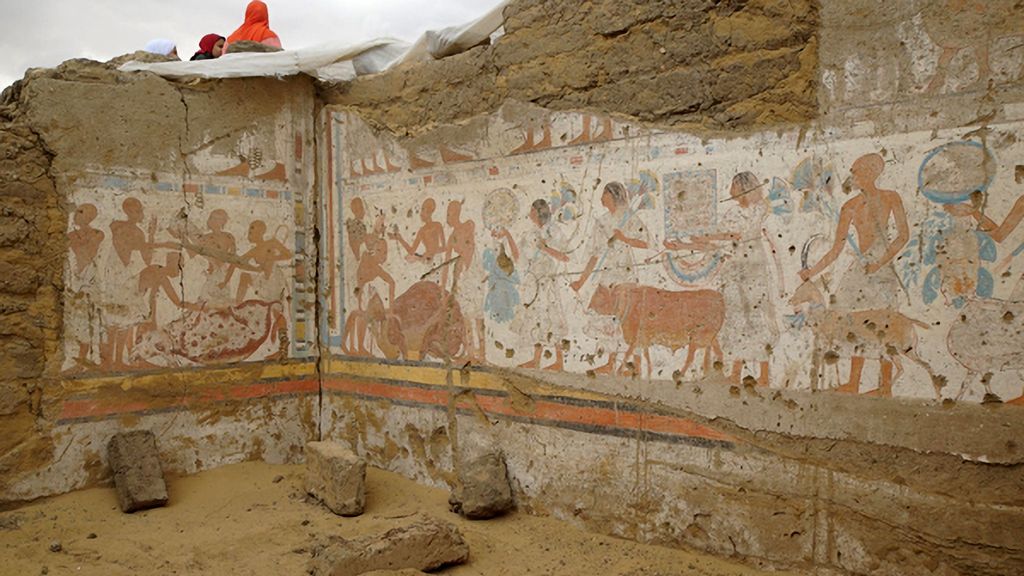 The entrance to the tomb of Batah-M-Woya, the head of the treasury during the reign of Pharaoh Ramses II, seen during excavation work at the Saqqara Necropolis in Giza. (Egyptian Ministry of Tourism and Antiquities/Zenger)

An ancient Egyptian tomb belonging to a royal scribe who was in charge of sacrifices under Pharaoh Ramses II has been discovered.

The discovery took place at the Saqqara Necropolis, a huge burial ground for pharaohs and other important people, in Giza near the capital, Cairo, in northern Egypt.

The Egyptian Ministry of Tourism and Antiquities said in a statement that the tomb of Batah-M-Woya, who was the head of the treasury in the era of King Ramses II, has been discovered by a Cairo University team chaired by Ola Al-Ajiz.

The tomb was unearthed in an area that also houses the final resting places for other important people in the New Kingdom (1550 B.C. to 1070 B.C.), including that of Pharaoh Horemheb, who ruled Egypt from 1319 B.C. to 1292 B.C. He was also a notable military commander.

Archeologists so far have uncovered the entrance of Batah-M-Woya,’s tomb, which leads to a hall full of drawings that depict scenes of ritual processions featuring offerings for the gods.

Professor Ahmed Rajab, the head of the Faculty of Archeology at Cairo University, said experts had been digging at Saqqara since the 1970s.

In April, it was announced that archeologists had also discovered more than 100 ancient tombs, some of which are at least five millennia old, at another site in northern Egypt. The 110 tombs were unearthed at the Kom al-Khaljan archaeological site in Egypt’s Dakahlia Governorate in the Nile Delta region.

Among the graves are 68 oval-shaped tombs, which have been dated back to Egypt’s Predynastic era from 6000 to 3150 B.C.

Thirty-seven rectangular tombs were also found at the site and are believed to be from the Second Intermediate Period from 1650 B.C. to 1550 B.C. when the Hyksos people of West Asia ruled the country.

The remaining tombs are oval-shaped and have been dated to the Naqada III or Protodynastic Period from 3200 B.C. to 3000 B.C., a time when the Egyptian language was first recorded in hieroglyphs.

Some of the tombs uncovered still contained the remains of adults and children as well as grave goods and pottery items.