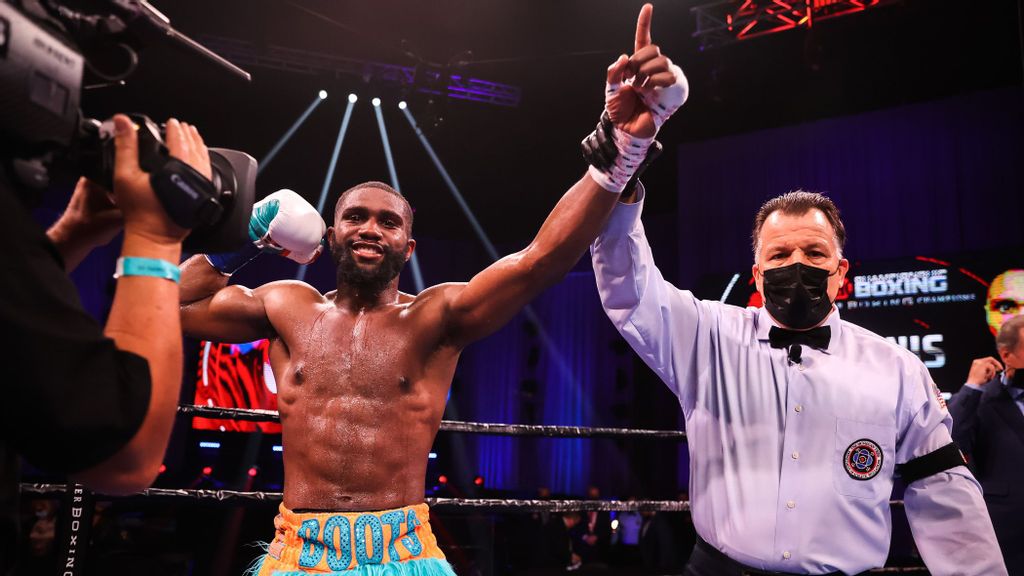 In the seven years he has known Jaron Ennis, Stephen “Breadman” Edwards never has seen the unbeaten welterweight lose a round in sparring or in an actual fight.

“Jaron is a nice kid who doesn’t curse or anything, but he’s very violent in the ring. Rarely have I ever seen him not get the better of two sparring sessions in a row. Jaron is an extremely talented fighter who is very consistent in every single fight of every single gym session,” said Edwards, who has trained former junior middleweight champion Julian Williams.

“I’ve been around Jaron since 2014 in training, and he is the best gym fighter I’ve ever seen from the standpoint of sparring and working hard and putting everything together. A lot of fighters who are in with a dangerous opponent will just out-point them, play it safe and win a unanimous decision, but Jaron is a real killer.”

The switch-hitting Ennis (27-0, 25 KOs) returns to action on Saturday in pursuit of his 18th straight knockout against Puerto Rican Thomas Dulorme (25-5-1, 16 KOs) at Mandalay Bay resort in Las Vegas on Showtime (10 p.m. ET).

“Jaron Ennis is the future of the welterweight division, and this is going to give boxing fans another opportunity to compare him to the other guys in the division,” said Cunningham, a 45-year-old retired two-time cruiserweight champion.

“I watched a recent interview with one of the guys who have [a welterweight belt], and when he was asked about Jaron, he was sort of [dismissive.] Many welterweights just don’t want to fight him. They’ll avoid him for as long as they can if they’re not in a position where they’re forced into doing it.”

Edwards also sees Ennis as integral in the exciting progression of the welterweight division, which includes left-handed IBF/WBC champion Errol Spence (27-0, 21 KOs). Spence’s past two victories were split- and unanimous decisions over Porter (September 2019) and two-division title winner Garcia (December 2020), the latter of whom is 36-3 (21 KOs).

Ennis likens Saturday to fighting in his hometown, largely because Dulorme won’t be the first opponent he’s faced in Las Vegas.

As an amateur in 2015, Ennis was a gold medalist in the National Golden Gloves, U.S. Youth National Championships and both a gold and silver medalist in separate U.S. Olympic Trials qualifiers.

The Golden Gloves were in Las Vegas recalls Ennis, whose amateur record at 141 pounds was 58-3, including a silver medal in the 2014 National Golden Gloves.

“That’s a really fun memory, especially because I won the whole tournament. I love Vegas. It’s the home of boxing,” said Ennis, who is trained by his father, Bozy, and nicknamed “Boots.”

“But honestly, I have so many fans from Philly coming out to this fight. It’s going to feel like I’m fighting at home. I would love to keep fighting in Vegas, bringing my Philly people out and making it like a second home.”

“Jaron Ennis is a special talent who is progressing at an incredible rate of speed,” Flores said. “He can be a headliner in Las Vegas for many years to come, and that ascension continues with Dulorme on Saturday.”

Dulorme’s resume includes him being TKO’d in the sixth round by Crawford, losing a unanimous decision to Ugas and battling to a draw with two-division title winner Jessie Vargas.

The dangerous Dulorme rose from a pair of second-round knockdowns and scored one of his own in the seventh in August 2017 against Ugas, who retired Pacquiao.

“Dulorme is a good fighter, and I don’t take anything away from him. He’s fought a lot of great guys, world champions,” Ennis said. “But I’m on a different level right now. I’m coming to take over the welterweight division, and he’s in my way. He’s got to go. I’m coming for all the belts.”

In his last fight in April, Ennis scored a sixth-round knockout of former champion Sergey Lipinets, who entered at 16-1-1 (12 KOs) before being knocked out for the first time in his career.

“Once he got [Lipinets] tamed and had him outclassed, Jaron got even more violent and knocked him out, which separates him from the younger, talented guys,” Edwards said of Ennis, named Ring Magazine’s 2020 Prospect of the Year.

“Jaron is trying to hurt you as well as outclass you, which is why he has so many knockouts. Jaron’s mentality is to keep beating on you, touching you over and over with a jab, a body shot and different combinations to force you to submit or for the referee to stop it,” Edwards said.

Ennis was similarly destructive in July 2018 with his four-knockdown, third-round TKO of Armando Alvarez, who entered the bout at 18-0 (12 KOs).

On Saturday, “Boots” is ready to kick butt, yet again.

“It’s wonderful that I’m getting more and more recognition,” said Ennis, who has gone as far as six rounds on just four occasions. “But that’s not what I do this for. I’m just ready to take over the entire division. I promise this is just the start for me.”

«Previous Post
How ‘Risky’ Propelled Mike Estime’s Career And Opened The Door To Other Opportunities»Next Post
It’s A Happy Halloween For Jaron Ennis, Who Dropped Thomas Dulorme In First Round For 18th KO In Row