A side order of hibiscus is a special treat for Estrella, who has adapted well to her new home. 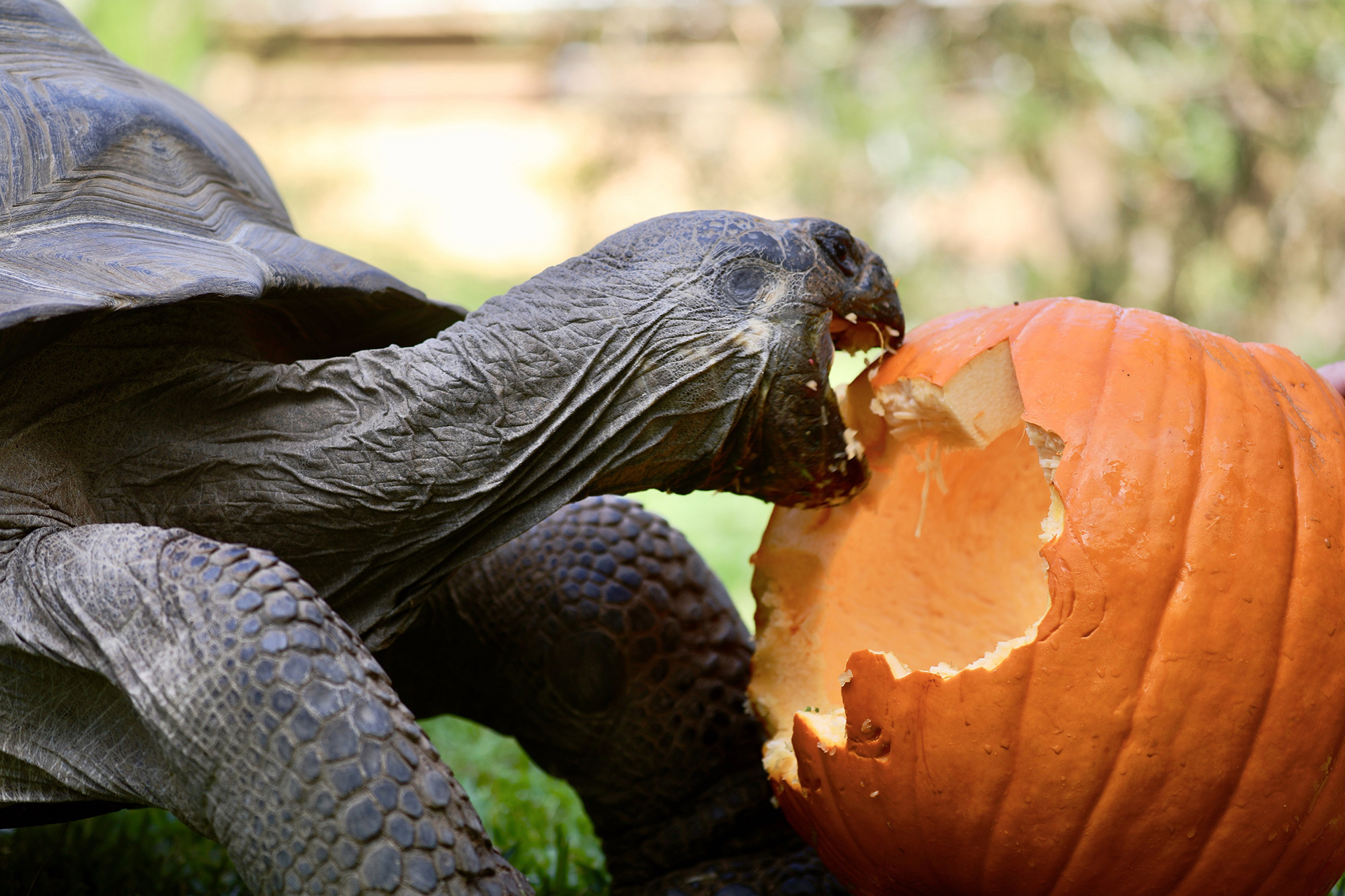 Estrella the Galápagos giant tortoise celebrates her first Halloween in Australia with a carved pumpkin decorated with pink flowers.

Estrella was filmed devouring the Halloween treat at the Australian Reptile Park, an hour from Sydney, the nation’s capital. In the footage, she enjoys the fruit with gusto.

The new resident is experiencing the holiday after a long overseas journey and quarantine period. The zoo reports she is settling into her new home.

“Happy (almost) Halloween! The Australian Reptile Park’s newest resident, Estrella the Galápagos tortoise, has enjoyed her first Halloween in Australia by feasting on a huge jack-o-lantern, adorned with her favorite flowers – hibiscus!” the zoo said.

The Australian Reptile Park said: “Pumpkin is a special treat for Galápagos tortoises as they enjoy the different smells, taste and look.”

The zoo also announced she is clicking with her new mate in their enclosure.

“Earlier this month, she was finally introduced to her boyfriend Hugo when she moved into their shared exhibit. The pair is getting along famously, and Hugo has taken a very special liking to his new roommate.”

Male giant tortoises can weigh more than 500 pounds, and females average about 250 pounds.

Daniel Rumsey, head of reptiles, said: “Hugo and Estrella have been getting along great so far, and it’s wonderful to see the pair finally interacting after such a long courtship. They’re definitely the Reptile Park’s hottest couple!”

The Australian Reptile Park also announced it has reopened as a COVID-19 safe business. “As well as the chance to reconnect with nature after months stuck at home, visitors will be able to redeem their Dine & Discover NSW Vouchers at the Park — both at Reception and the on-site kiosk, the Hard Croc Cafe.”

The giant tortoise arrived in Galápagos from mainland South America 2 million to 3 million years ago. However, by the 1960s, centuries of exploitation by whalers, traders and collectors had greatly reduced their numbers.

The Galápagos tortoise is now listed as vulnerable on the International Union of Conservation of Nature’s Red List for Threatened Species. The introduction of several species by humans, such as pigs, cats, dogs and goats, has had devastating effects on the tortoise population.

The Galápagos giant tortoise rests for 16 hours a day, subsisting on grasses, fruits and cactus pads. They can survive for up to a year without water or food, according to the Galápagos Conservation Trust. Small birds, such as Galápagos finches, are often seen perched on their backs.

A pair of Galápagos tortoises have produced four young reptiles at the Auckland Zoo in New Zealand, helping to grow the endangered species population.