VIDEO: Asleep At The Steal: Crook Who Stole Truck Caught Napping In The Back 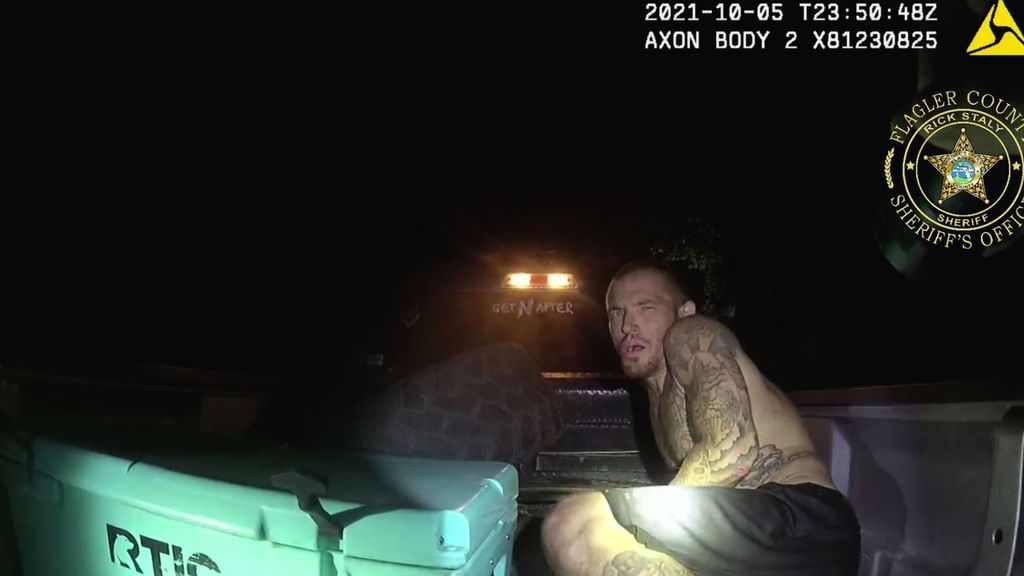 Authorities found Eric Marcotte apparently asleep in the back of a bucket truck in Flagler County, Florida. Soon after this image was taken, he bolted from sheriff's deputies. (Flagler County Sheriff's Office/Zenger News)

A man has been arrested in Florida for stealing a truck and dragging its driver along the ground. His reason for taking the vehicle: he didn’t want to walk home.

“A power line crew was driving a bucket truck on SR-100 West in Bunnell when they noticed an unknown male in the back of the truck,” the sheriff’s office said in a statement. “The victim, in a following truck, stated the male refused to exit the back of the bucket truck and notified the company of the situation.” (A bucket truck is equipped with an extendable, hydraulic boom carrying a large bucket for raising workers to elevated, hard-to-reach areas.)

In a video of the incident released by the sheriff’s department, deputies who arrive on the scene appear to wake the suspect, who initially seems to be very groggy before abruptly running away. The suspect — subsequently identified as Eric Marcotte —then got into the victim’s vehicle and starts to drive away.

“The victim attempted to grab the steering wheel and was dragged about 50 feet before releasing his grip and rolling into a ditch as the vehicle fled,” the sheriff’s department said.

The worker, despite ending up in a ditch, was uninjured.

Meantime, the suspect managed to get away — at least for a while.

A few hours later, authorities found the stolen truck abandoned about 20 miles away, in Ormond Beach. Then, the next day, they located Marcotte in Volusia County and arrested him an outstanding warrant for violation of probation.

During questioning, Marcotte said he stole the bucket truck because he “did not want to walk all the way back to Volusia County” where he resides, the sheriff department’s statement said.

“Marcotte is no stranger to law enforcement,” the statement said. “He has previously been charged in Volusia County for burglary, petit theft, loitering and prowling, grand theft, grand theft of a motor vehicle, resisting officer without and with violence, battery, liquor possession under 21, aggravated assault with a deadly weapon, violation of probation and robbery in Ohio.”

Marcotte is being held at the Volusia County Branch Jail, pending extradition to Flagler County, where he will face charges of carjacking, theft of a motor vehicle and grand theft.