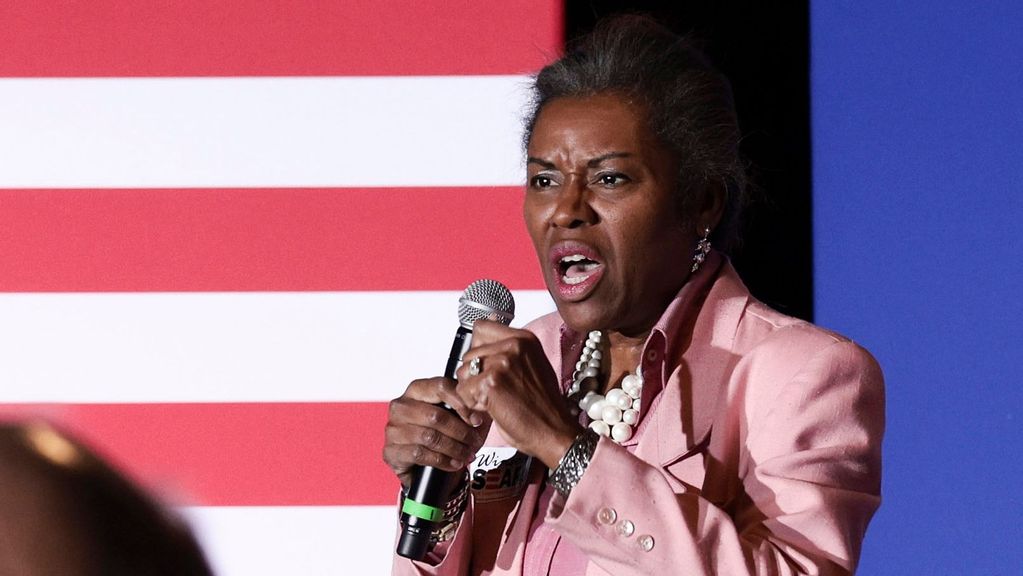 MIDDLETOWN, Va. — Winsome Sears is the first black woman to be the Republican nominee for lieutenant governor in Virginia, a state whose checkered racial history is under public debate. But she believes she can win votes from black Virginians irked by a Democratic Party that she says takes them for granted.

“The Democrats have been successful in instilling fear in people who look like me,” she told Zenger in a wide-ranging interview. “I have had white liberals talk down to me — talk down to me, and as if I didn’t exist — simply because I’m a Republican.”

“I mean, how dare you? Who told you you could talk to me that way? Because I’m not the right kind of black? Is that how this works?”

Sears is running against Democratic Del. Hala Ayala. Before being elected to the Virginia House of Delegates in 2017, Ayala was a cybersecurity specialist at the Department of Homeland Security. Whichever way the vote shakes out, the winner will be the first woman of color to hold statewide office and the first woman to serve as lieutenant governor in the state’s history.

As a state delegate two decades ago, Sears represented a 60-percent black district that straddles Norfolk and Virginia Beach. Now she’s one of two women vying to make history in an office that has been exclusively male since the Virginia Constitution of 1851 created it. Ayala’s district in a Washington, D.C., commuter county is nestled between the Manassas Civil War battlefield a giant outlet mall. It’s also 69 percent white.

Developers who gentrify urban blocks and price black Virginians out of their own neighborhoods, Sears said, often work hand-in-hand with liberal politicians: “I think we have to consider that most of these places that they’re talking about — gentrification — they’re run by Democrats. They are run by Democrats. And so here we go again. We’re talking about — Republicans are supposedly racist, and Democrats are supposedly the ones who care more about you.”

Sears, who joined the U.S. Marines as an 18-year-old Jamaican immigrant, said black voters should be shoulder-to-shoulder with the GOP when it defends gun owners, especially armed women in urban areas. “What am I going to do? Tell these black women, ‘You can’t have guns’? I don’t think so,” said Sears. “When I’m waiting for the police to come, what do I do? How do I protect myself? I don’t know karate.”

She said her time in uniform didn’t shape her views on firearms, but the black community in Virginia’s Hampton Roads region did. “Do you know that the first gun confiscation laws were against black people? … We were the ones who immediately could not own guns, even though it’s our Second Amendment right,” she said. “And so we’re not going to do away with that.”

The National Rifle Association Political Victory Fund made headlines in June when it endorsed Winsome Sears and attorney general hopeful Jason Miyares, but not Glenn Youngkin, the Republican nominee for governor. Its website gives the Democrats in all three races “F” grades but leaves Youngkin with a literal question mark.

The NRA endorsed Republicans for Virginia governor in the last four elections. The organization did not respond to a question about why this year is different. Youngkin spokeswoman Macaulay Porter didn’t address the NRA directly, but said Youngkin “supports the right to keep and bear arms.” His opponent, former Democratic governor Terry McAuliffe, “wants to repeal the Second Amendment and confiscate your guns,” said Porter. The Second Amendment to the U.S. Constitution is not subject to repeal by any governor.

Sears said Virginians have the right to resist government initiatives that require COVID-19 vaccinations as broadly as possible. Pointing to the infamous Tuskegee experiments that subjected black men to syphilis for 40 years without medical treatment, she said that according to some, as many as 85 percent of African-Americans in New York are not vaccinated.

The city’s public health data indicate the number is a bit lower, 72 percent, counting all black New Yorkers between the ages of 18 and 44. “So what’s going to happen with them? Are they now not going to be able to get a job?” she asked. Sears mused about a future where “you have a restaurant employee, a waiter, checking your medical vaccine status. And by the way, you need a photo ID to prove that this is you on that vaccine record? Are you now going to check for HIV status?”

Spokeswoman Delceno Miles declined to say whether Sears is vaccinated. “Winsome encourages those who wish to take the vaccine to do so, but it should not be mandated,” Miles said in an email.

Sears believes many black Virginians have sympathized with her furrowed brow as state officials dismantle statues of Confederate generals. “The curious thing,” she said, “is that I have spoken to enough black people, and what they’re telling me is that they wanted the statues up, so that they could talk to their children about who this person was, what they did, what they didn’t do.”

And she would prefer to see a statue of a prominent African-American next to every Confederate statue that remains: “It would be wonderful if we could put up other statues of equal grandeur, to then talk about all of history, so that we could say this is what this person did. We could put up a Harriet Tubman.”

Sitting near the brick hearth of the Wayside Inn — the 18th-century lodge survived the Civil War only because soldiers from both sides stayed there, according to the owners — Sears said she wants to see America’s warring racial politics cool down.

“It is not 1963 when my father came,” she said, recalling her family’s roots in Jamaica. “We can now live where we want, we can eat where we want. We own the water fountains. Excuse me. So let’s not. Let’s stop it. Let’s live together.”

And she was viscerally offended in 2012, she says, watching then-Vice President Joe Biden campaign for re-election in the southern Virginia town of Danville. “Listen to his vernacular, his language,” she said, adopting a vocal caricature of a white man trying to affect a black accent. “‘Republicans are going — ’” Sears stops and ratchets the dialect up a notch. “‘Republicans gonna put y’all back in chains.’ Excuse me, who are you talking to?”

“And then when Hillary was in a black church, what did she say?” Sears asked, thinking about a 2007 campaign event at the First Baptist Church in Selma, Ala. “‘Ah don’t feel no ways taahred. I come too faaahr to turn back now,’” she says, mimicking Clinton’s leap to the late gospel singer James Cleveland’s accent.

“This is what I’m saying. They take us for granted,” said Sears.

Ayala has a 4-point polling edge in the latest Christopher Newport University Wason Center for Civic Leadership poll, a nonpartisan survey released Oct. 8. She also has the advantage of being a current lawmaker with party relationships to mine and favors to collect. Sears was vice president of the state board of education a decade ago but hasn’t held elective office since 2004, when she left the House of Delegates and unsuccessfully challenged Democratic Rep. Bobby Scott for his seat in Congress.

But her place in history as Virginia’s first black female Republican lawmaker created enough enthusiasm this year among GOP voters to whisk her past two better-funded contenders during a nominating convention in May.

She did it without strong positions on two slow-boiling issues.

A Texas law that significantly limited the accessibility of abortion by allowing citizens to sue doctors and nurses who perform them. Would it be a good thing if Virginia lawmakers imitated it? “We’re not in Texas, and I’m not going to talk about that,” she said.

Should the next governor phase out an unpopular personal property tax on cars? “Well, we have to find a way to fund government as well. So we have to be careful with what we’re doing,” she said. The annual tax, the steepest of its kind in America, varies from county to county but averages about 4 percent of resale value.

Haggling with tax-enthusiastic politicians over the value of used cars might become Sears’ reality again, but for now it’s a world away.

She lives in Winchester, an apple-orchard town more than 220 miles from her old district. The move came after her eldest daughter, DeJon Williams, was diagnosed with bipolar disorder. Sears and her husband, Williams’ stepfather, cared for her and eventually for Williams’ two daughters.

All three — Sears’s daughter and granddaughters — would perish in a 2012 car crash when Williams, according to police, slammed into a car at “a high rate of speed” as its driver turned onto the highway in front of her. Victoria was 7. Faith was 5.

The years of grief that followed, said Sears, gave her perspective about which issues are big and which are small. And it led her toward career choices that run far afield from the lawyer she wanted to become after she served in the U.S. Marines. A few, she said, confound some voters’ expectations of a Republican.

“I’ve run a homeless shelter for women and children. I’ve had people be surprised by that [and] ask, ‘How could a Republican care about the homeless people?’” she said.

“I led the men’s prison ministry. Every Wednesday, I was there, six o’clock, delivering a message of hope. These are the things that we do in our lives, and we don’t do them for accolades. We do them because we care,” said Sears.

“I’m trying to live my life the best way I know how,” she said. “I’ve got my own problems. And when you’ve had three children go to heaven in one night, you see the world a little differently.”

Sears said she loves gardening — “I had a 20-pound watermelon, I couldn’t even pick it up” — and that her favorite comfort food is Caribbean ackee and saltfish. “It’s the Jamaican national dish and I could eat it all day,” she said.

And she laughed at a question about her first pet growing up in Jamaica: “It was a chicken.”

Did it have a name? “No, because we killed her and ate her!”

“You know, I thought of her as my pet until one day we killed her,” said Sears. “We always had dogs and cats and things like that. But this chicken was my chicken.”

«Previous Post
Passionately Unique: Use What You Love To Drive The Sales You Want»Next Post
Worrying Sign? As Election Nears, Democrats Rally The Faithful In Blue Areas