The super-intelligent mollusk hides in newly built caves and hunts at night. 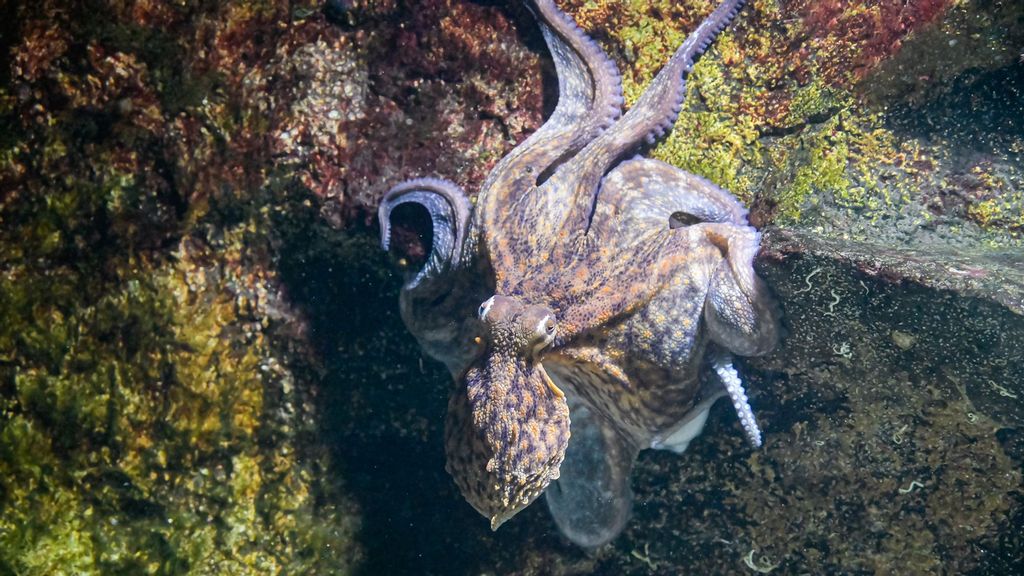 An octopus lives in a large tank at Zoo Basel in Switzerland, where it can hide away in specially built caves, coming out at night to search for prey. (Zoo Basel/Zenger)

An octopus is living large after a Swiss zoo made its home 10 times bigger and added caves in the rocks where it hides from other creatures.

The footage shows the octopus in its new environment.

The images were shared online by Zoo Basel in Switzerland. “The zoo’s common octopus now lives in display tank 11 with some fish species and other Mediterranean invertebrates,” the zoo said in a statement.

“An octopus gives away their hiding spot with the ‘toys’ they collect over the course of their lifetime. Piece by piece, they build a mountain of mussel and snail shells in front of their cave. The longer an octopus lives in a particular cave, the bigger the pile becomes — and the easier it is to find their hiding place.”

Zoo Basel’s vivarium has been home to common octopuses since 2009.

“With the pandemic measures, it is not always easy to find new octopuses. The zoo has used this time to octopus-proof display tank 11.”

Octopuses are often nocturnal hunters, opting to sleep in their caves during the day. “Only when the sun begins to set do they slip out of their caves and go on the hunt for prey, such as crabs, snails, mussels and small fish.”

The zoo said there is a connection between an octopus’ intelligence and their hunting habits.

“This predatory diet is probably why octopuses are highly intelligent. Preying on well-defended crabs without hurting themselves on their claws requires more brainpower than grazing in algal meadows. Octopuses are benthic animals, meaning they mostly move around on the seabed or along the rocks on the shore. But they can also swim in open water using a backward-thrusting motion.”

Octopuses, which weigh 6.6 to 22 pounds and grow to 12 to 36 inches, are occasionally spotted on land.

“On rocky coasts, they can even leave the water for short periods of time and cover short distances on land. They go in search of rock pools, as the animals trapped there make for easy prey.”

“This behavior must be considered when keeping octopuses: having an octopus-proof tank opening is essential,” the zoo said. “If an octopus were to escape from its aquarium, the animal could get itself stuck on land or find another tank in the vivarium to sneak into.

“Overhangs on the opening of the tank and artificial grass mats should prevent this from happening. All water pipes also have to be secured, as octopuses can contort themselves very easily and fit into tiny crevices and slits.”

Octopuses live to a maximum of 4 years old in the wild. Even in a vivarium, their lifespan is short, given reproduction. Octopuses only breed once, and then both parents die. The female’s clutch of eggs can be as high as half a million — but it’s a food source for many plankton-eating fish. On average, just two of these larvae survive and mature.