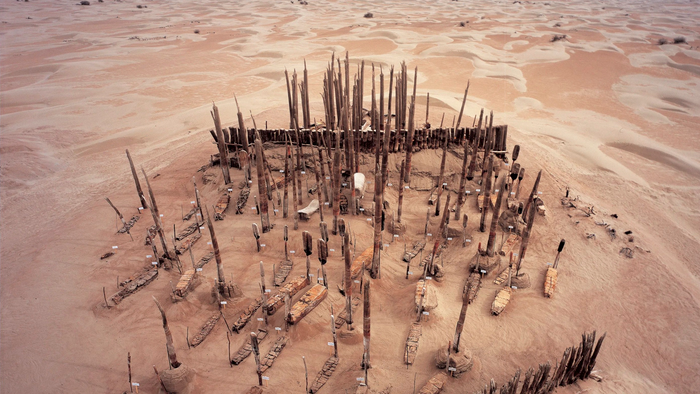 Since the 1990s, hundreds of mummies naturally preserved in the dry climate of western China’s Tarim Basin have been discovered, with their somewhat Western appearance attracting international attention and conjecture.

The mummies, dating from 2000 B.C. to A.D. 200, were buried in boat-like coffins though they were in the desert. They wore felted and woven woolen clothing, herded cattle, sheep and goats and ate wheat, barley and millet, researchers say.

While some scholars speculated that they descend from migrating Yamnaya herders from Russia’s Black Sea region, others said they came from the oasis cultures of the Bactria-Margiana Archaeological Complex (BMAC), which has a strong genetic relationship to early farmers of the Iranian Plateau. BMAC refers to an early civilization (2000–1500 B.C.) that was centered in modern Turkmenistan and Tajikstan.

Researchers analyzed genomic data from 13 of the earliest Tarim Basin mummies, dated 2100 to 1700 B.C., and five mummies of the nearby Dzungarian Basin, dating 3000 to 2800 B.C., to better understand the populations that settled at the Xiaohe and Gumugou sites around 2000 B.C.

The analysis revealed that the Tarim Basin mummies were not newcomers but direct descendants of people of the preceding Pleistocene age who had mostly disappeared by the end of the last glacial era, about 11,700 years ago, when the current Holocene period began.

Dubbed Ancient North Eurasians (ANE), some of their genome survives among indigenous peoples of Siberia and the Americas. The mummies show no interbreeding with any other groups. The researchers determined that the mummies show evidence of being a previously unknown people who were genetically isolated long before settling in the Tarim Basin.

“Archeogeneticists have long searched for Holocene ANE populations in order to better understand the genetic history of Inner Eurasia. We have found one in the most unexpected place,” says Choongwon Jeong, a senior author of the study and a professor of Biological Sciences at Seoul National University.

The earliest people of Dzungarian Basin, however, descended from local populations and also from the Afanasievo herders who had strong genetic links to the Early Bronze Age Yamanya people. The ancestry of other pastoralists such as the Chemurchek, who spread northward to the Altai Mountains and Mongolia, was made clearer in the genome study.

The authors of the study, published in the journal Nature, believe their findings will transform the understanding of ancient Eurasians and their migration.

“These findings add to our understanding of the eastward dispersal of Yamnaya ancestry and the scenarios under which admixture occurred when they first met the populations of Inner Asia,” said study co-author Chao Ning of Peking University.

“Despite being genetically isolated, the Bronze Age peoples of the Tarim Basin were remarkably culturally cosmopolitan — they built their cuisine around wheat and dairy from the West Asia, millet from East Asia and medicinal plants like Ephedra from Central Asia,” said co-author Christina Warinner of Harvard University.