Experts say the final haul of titanosaur eggs could top 100. 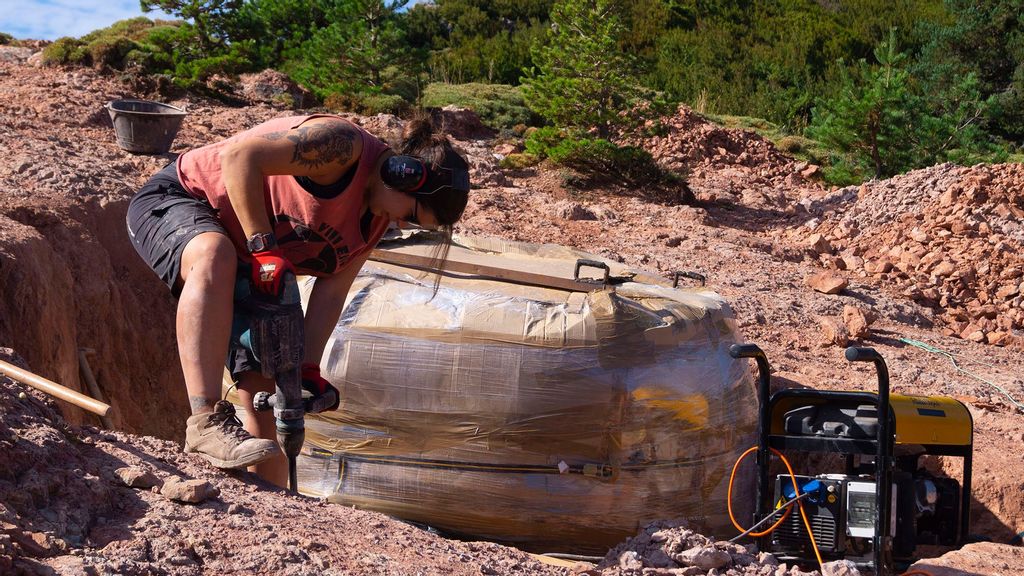 Carmen Nunez Lahuerta, a director of the excavation, works on a block containing a dinosaur nest near Huesca in northern Spain.  (University of Zaragoza/Zenger)

Archeologists have extracted 30 titanosaur dinosaur eggs found in a two-ton rock in northern Spain and believe there could be as many as 70 more deeper inside the boulder.

The titanosaur was a long-necked sauropod that lived until the extinction event at the end of the Cretaceous period 66 million years ago. The eggs were found at a dig site in Loarre in the northeastern Spanish province of Huesca in September.

Preliminary tests indicate that the nests belonged to the titanosaur, a quadruped herbivore with a long tail and neck that could reach up to 66 feet in length.

An international team of paleontologists led by the Aragosaurus-IUCA Group of the University of Zaragoza did the work in collaboration with Nova University Lisbon in Portugal. Miguel Moreno-Azanz, Carmen Nunez-Lahuerta and Eduardo Puertolas are leading 25 paleontologists and students from Spanish, Portuguese and German institutions in the project.

Moreno-Azanza, who is affiliated with Nova University Lisbon, said in an interview that two nests were excavated in 2020, and about 30 eggs have been discovered in the rock.

“The main objective of the 2021 campaign was the extraction of a large nest that contains at least 12 eggs that were integrated into a block of rock weighing over two tons,” he said. “In total, five people dedicated eight hours a day for 50 days to excavate the nest, which was finally removed with the help of a bulldozer.”

Moreno-Azanza pointed out that it was unusual to extract such a large rock. He said it and 10 smaller rocks from the site were now in a warehouse in Loarre and will eventually be displayed at the future Laboratory-Museum.

“It is expected that next spring the space will open its doors to visitors, who will be able to follow the process of preparing and studying the fossils of this site in person,” Moreno-Azanza said. “The museum has two exhibition rooms where the methodology of a complex paleontological excavation will be explained.”

He said the exhibition would be a satellite room of the Museum of Natural Sciences of the University of Zaragoza and feature specimens from the Loarre site and replicas of dinosaur eggs from other parts of the world.

Moreno-Azanza also said the Loarre Dinosaur Eggs project has obtained funding for the next three years.

The excavation work is being funded by the Portuguese Foundation for Science and Technology and the Spanish Ministry of Science.