The 11-month-old panda, who lives in a theme park in Japan, is a regular on YouTube. 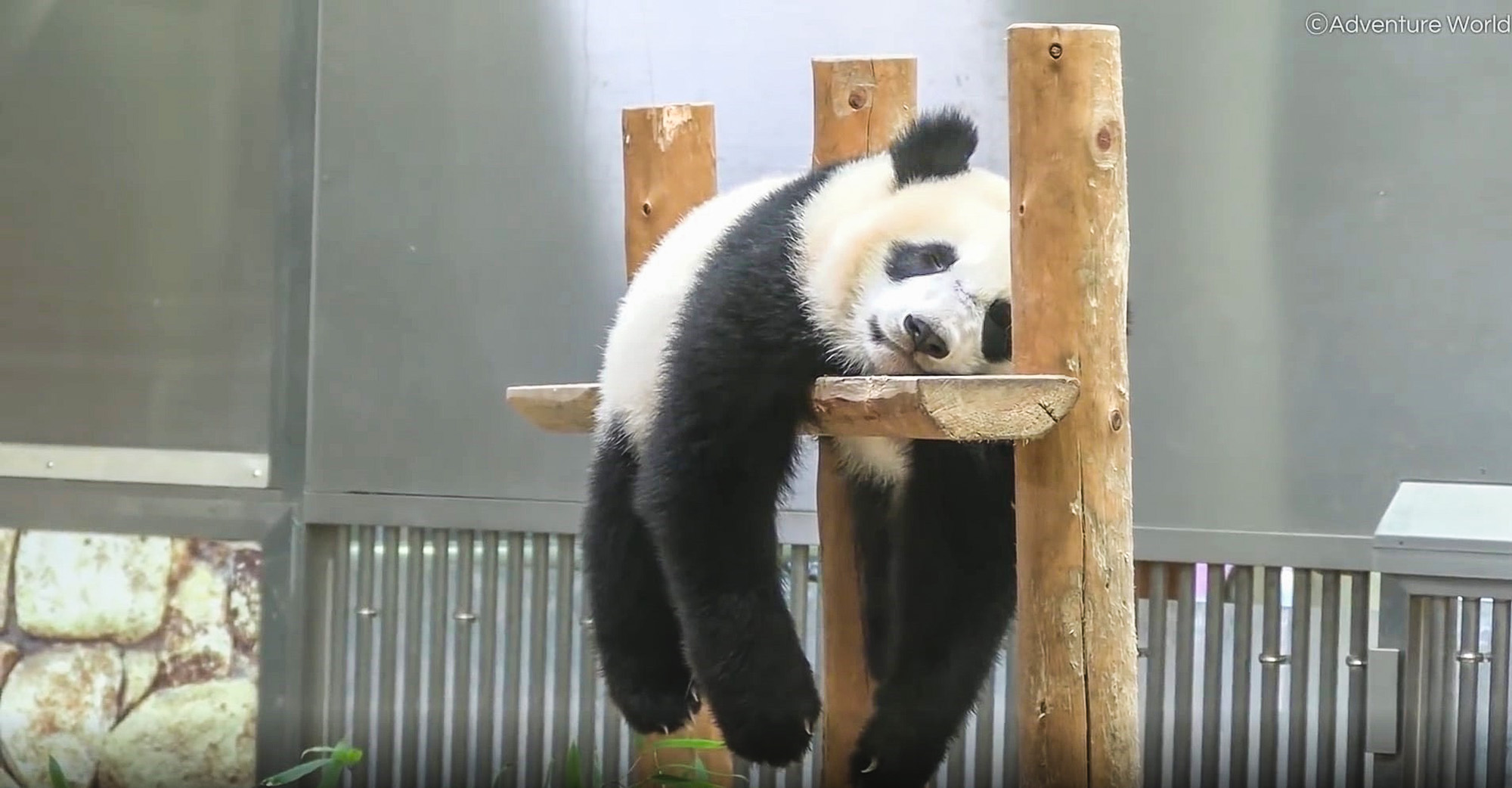 A baby panda peacefully naps inside its enclave, as the rain pounds outside.

Kaedehama is a celebrity baby panda who lives at the Adventure World theme park in Shirahama, in the Wakayama Prefecture in Japan.

The youngster has a following on social media and video-sharing platforms, where the theme park regularly shares videos on YouTube of him playing and climbing in his pen.

Kaedehama, who is just 11 months old, is seen in the footage taking a nap while lying on his stomach on top of a climbing frame. His arms droop on either side of him. He is the son of father Eimei and mother Ryohama, who has given birth seven times.

Eimei was 28 at his birth — and became the oldest male panda in the world to naturally breed in captivity.

The panda can be seen in the footage breathing in and out slowly as he calmly sleeps.

But then the camera captures him waking up and his eyes open. He appears to try to rub the sleep out of his eyes with his left paw as he emerges from his slumber.

A final shot shows his mother Ryohama sitting nearby and quietly munching on some bamboo as the video ends.

The footage was shared online by the theme park on Oct. 25 with the caption: “Unfortunately it’s raining in Shirahama today! Kaedehama and mother panda Ryohama spend time in the indoor playground. It is Kaedehama who sleeps comfortably on the balance beam while listening to the sound of rain.”

The theme park said Kaedehama is now 337 days old and weighs 56.6 pounds. That’s a considerable growth spurt, since he weighed a mere 5.5 ounces at birth.

The park’s first panda baby, Rauhin, was born in Adventure World on Sept. 6, 2000. Since then, the zoo has succeeded in breeding 17 babies.

Breeding research in captivity is conducted to protect and increase the number of individuals, according to Adventure World. In 1994, as the Japanese branch of the Giant Panda Breeding Research Base in Chengdu, China, Adventure World started joint research between the two countries to secure that goal.

There are an estimated 1,864 wild giant pandas, according to the World Wildlife Fund. In the wild, male pandas are not involved in the care of their cubs. Fathers and cubs may never encounter each other.

Due to intense breeding efforts, the International Union for Conservation of Nature no longer classifies giant pandas as endangered. They have been downgraded to vulnerable on the global list of species at risk of extinction after their population increased by 17 percent in a decade.