Would-be hijackers fled in speedboats as troops from a nearby destroyer dropped onto container ship’s deck from a helicopter. 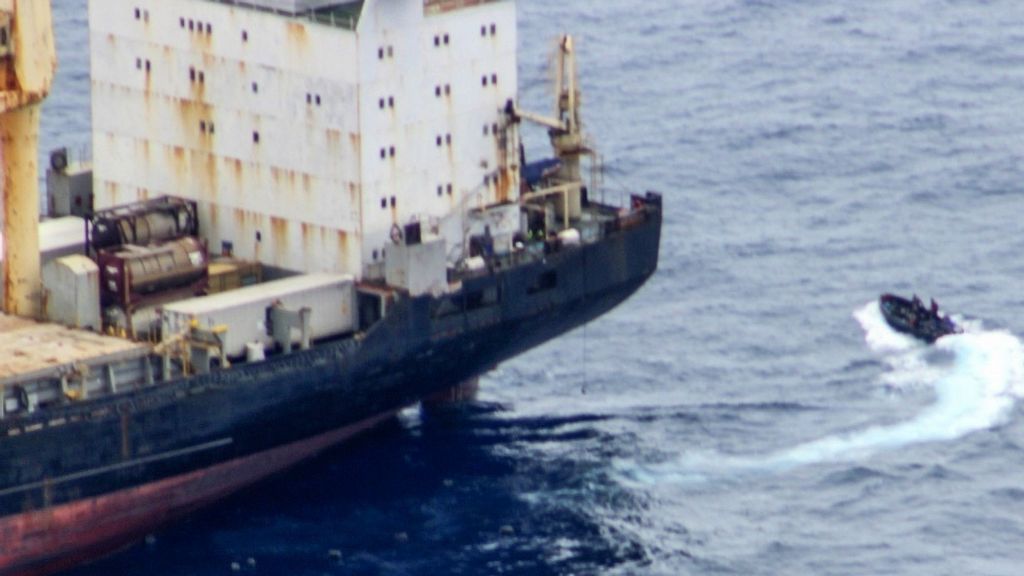 Pirates in speed boats attempted to commandeer a Panamanian-flagged cargo ship off Africa's western coast on Monday. (Ministry of Defense of Russia/Zenger)

This was no game: The crew of a Russian anti-submarine ship prevented pirates from seizing a Panamanian cargo ship in the Gulf of Guinea on Monday night, the Ministry of Defense of the Russian Federation said.

The crew aboard the Vice-Admiral Kulakov received a distress signal from the nearby container ship, Lucia, which was flying the flag of Panama. The civilian ship was off the coast of Nigeria, and was en route from Togo to Cameroon.

The crew on board the Russian destroyer responded by ordering the cargo crew to take cover in the engine room while soldiers made their way to the Lucia.

As seen in the footage, the container ship was being threatened by masked men in small speed boats that pulled up alongside.

Marines from the Vice-Admiral Kulakov boarded a Ka-27PS helicopter in full combat gear and took off toward the Lucia. Upon seeing the approach of the chopper, the suspected pirates fired up the engines on their speedboats and fled.

Despite that, the troops went ahead and dropped from the chopper onto the ship and worked to secure its decks. The Russian marines can be seen carefully passing through the ship checking for suspected pirates as they made their way to the crew holed up in the engine room.

It was not immediately known how many crew members were on board, or if any of them were injured. Also unknown is whether any of the suspected pirates had actually made it on board the ship before fleeing and what types of cargo the ship was carrying.

It is not clear if the Russian military plans to carry out an investigation into the incident or track the speedboats.

Such attempted piracy is becoming less common. Reported incidents of piracy and armed robbery at sea fell to the lowest recorded number in nearly three decades in the first nine months of 2021, according to the most recent report on such illegal activities by the ICC International Maritime Bureau. “The overall reduction of piracy and armed robbery incidents in the region is a testament to enhanced maritime security and response coordination measures adopted by regional and national authorities,” according to the bureau.

The Russian vessel involved in Monday’s incident, the Vice-Admiral Kulakov, launched in 1980. It’s equipped with two anti-submarine/ship missiles and several other anti-submarine torpedoes and missiles.

The Ka-27PS Soviet-era military helicopter that ferried the marines to the cargo ship is used by several other countries in addition to Russia, including Ukraine, Vietnam, China and South Korea. It is primarily used for moving troops and anti-submarine operations.

«Previous Post
Jamal James Wants Rematch With Yordenis Ugas To Avenge The Only Loss Of His Pro Career»Next Post
Catholicism Continues To Grow In Africa And Asia, Plummets In Europe, New Report Says