Treasure had been buried in the foundation nearly 600 years ago, say experts. 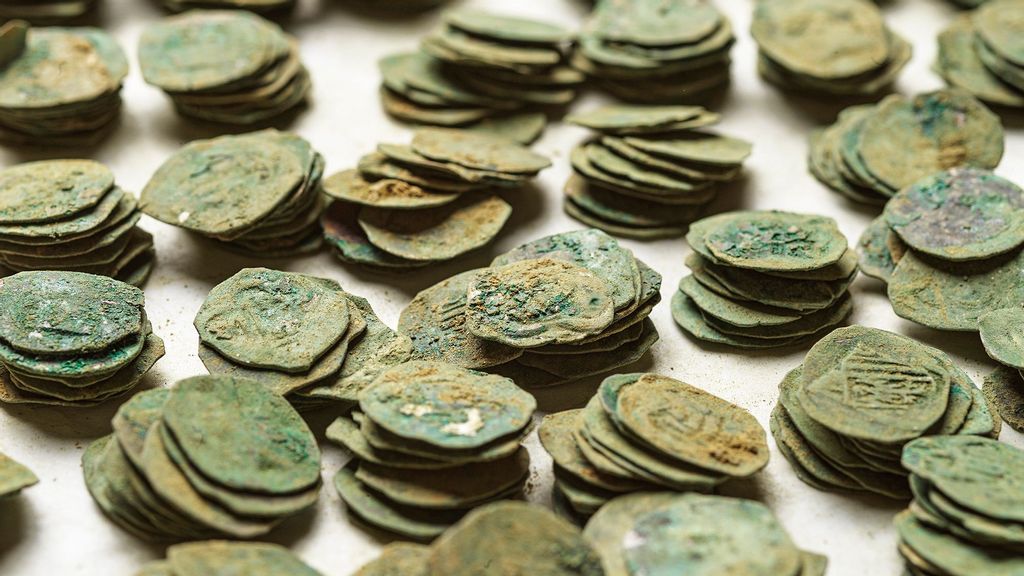 Some of the Pfennigs that were among the more than 6,000 coins recently found at a farm renovation site in Austria. (Michael Maritsch/Zenger)

More than 6,000 silver coins from the late Middle Ages were discovered during a renovation project on a farm in the village of Rainbach, Upper Austria.

The silver coins, which were handed over to the OÖ Lande-Kultur GmbH museum in Upper Austria, also known as Linz Schlossmuseum, “were wrapped in fabric and kept in a clay lidded pot,” the museum said.

“As a hiding place, the owner chose a spot in the foundation of a farmhouse, which he chose so skilfully that the coins remained undiscovered for more than five centuries.”

The museum said that it is unclear how the coins got there and who they belonged to.

“We can only make assumptions about the question of who the former owner was, most likely it was the former owner of the farm or one of his family members; servants as owners can in any case be excluded in view of the size.”

The statement said that “the exact time of the concealment is not yet known. What is certain, however, is that it is from the second half of the 15th century and consists of different types of coins that were then in circulation in the country as a means of payment.”

The museum gave details about the different coins they found.

“On the one hand, these were pfennigs and their half-pieces, called ‘halves;’ on the other hand, larger coins worth several pfennigs, mainly ‘Prague groschen’ imported from Bohemia and some Milanese pegioni, popularly called ‘snake groschen’ after the coat of arms, and Tiroler Kreuzer, a type of coin of particularly high quality,” the museum said.

The museum said that it could not put a value on the coins, which will be the subject of scientific study.

The find represents “one of the most extensive, late medieval complexes from a rural milieu in our state and beyond,” the museum said.

The museum in Upper Austria has about 108,000 square feet of exhibition space that focuses on natural, cultural and art history. “There is a wide spectrum of permanent exhibitions in the historic castle and in the new southern wing,” the museum’s website says. “They range from geological to contemporary history and bear witness to diverse and extensive special areas.

“The permanent exhibitions are flanked by diverse special exhibitions on current international and regional, as well as cultural, natural and contemporary history topics.”

Linz Schlossmuseum has two rooms with a permanent display of antique coins and  historic currency from the territory of today’s Upper Austria from the Celtic times, the museum’s website says.

It is unclear whether the coins that were recently discovered will go on display at the museum.