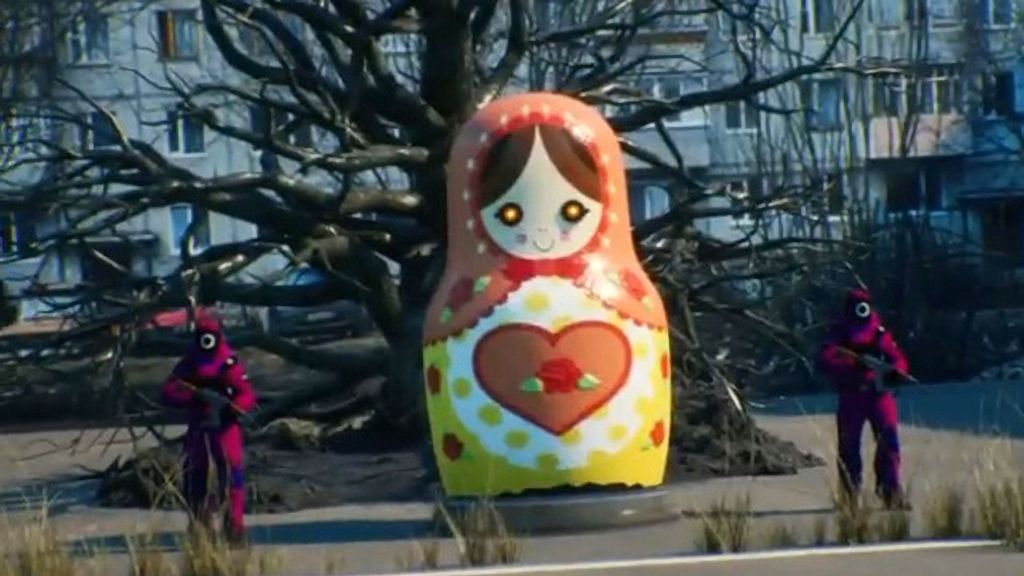 A Russian designer created a version of the deadly “red light, green light” game from the first episode of the Squid Games. (@designbyfeo/Zenger)

A reenactment of a famed scene from the first episode of the hit Netflix TV series “Squid Game” has earned a Russian fan praise from one of the show’s stars.

The creator of the reenactment, who gave his name as Feo, is from the northeastern Russian region of Yakutia. He shared this reenactment clip of the scene in which contestants participating in the first game have to get past a giant doll without moving when she turns around. If they fail, they are killed. (For the uninitiated, the “Squid Game” is about “hundreds of cash-strapped players who accept a strange invitation to compete in children’s games. Inside, a tempting prize awaits — with deadly high stakes,” the Netflix series description says.)

As a Russian, Feo replaced the doll seen in the Netflix series with a Russian “babushka” one. The video has notched up thousands of likes since being posted, even garnering the attention of South Korean actor Heo Sung-tae, who plays gangster and game contestant Jang Deok-su in the show.

The star shared the reenactment footage on his own Instagram account and added a note to it saying (in Russian) that it was “the best” and “well done” to congratulate its creator.

In an interview, Feo said he wanted to put a Russian spin on the game depicted in the series and was thrilled to hear from one of the series’ stars.

“I was just watching the series, and suddenly the thought came to me ‘What if this series were filmed in Russia? How would it look?

“Then I decided to recreate the ‘red light, green light’ scene from the series where a huge doll was looking for people who are moving when she says ‘red’. But instead of a doll, I put the famous Russian doll and instead of decorations on the wall, there are Russian apartment buildings.”

Working with visual effects is nothing new to Feo.

“I create scenes in 3D. I used to work in game development at the Mytona company, which develops games for mobile phones. I’m completely freelance now.”

Part of the series’ appeal, Feo says, is its intermixing children’s games with deadly ones.

“I also really liked the locations, costumes, and the visual effects.”

Feo feels “Squid Game” is superior to the competition-based motifs seen in “The Hunger Games” and “Battle Royale,” the 2000 Japanese film by Kinji Fukasaku, saying that while the latter is a classic, the “Squid Game” is “a new breath in this genre. I liked it more. It had more creative solutions.”

Feo’s favorite “Squid Game” character is Seong Gi-hun, played by Lee Jung-jae. “He is both a loser and a very lucky person at the same time. He is also kind and cunning.”