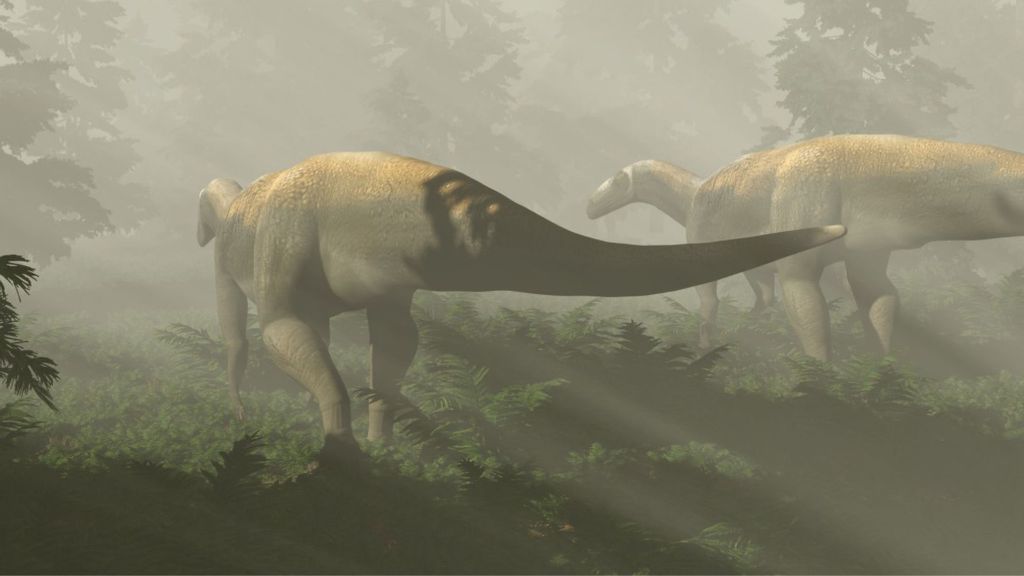 Anthony Romilio, a paleontologist at the University of Queensland in Australia, led an international research team that reanalyzed footprints left by the dinosaur and published their findings in the journal Historical Biology.

“Fossil footprints found in an Ipswich coal mine have long been thought to be that of a large ‘raptor-like’ predatory dinosaur,” the university said in a statement, adding that scientists have now established that it was in fact a timid herbivore.

The footprints were originally thought to fall under the Eubrontes style of tracks — typically made by two-legged carnivores. They were dated to the latter part of the Triassic Period, around 220 million years ago, according to the university. The research team decided to analyze the footprints again because of doubts over the original size estimates.

“For years, it’s been believed that these tracks were made by a massive theropod predator … with legs over two meters (6.5 feet) tall,” said Romilio. “This idea caused a sensation decades ago because no other meat-eating dinosaur in the world approached that size during the Triassic period.”

However, the research team identified the tracks as “Evazoum,” a type of footprint made by prosauropods — smaller vegetarian dinosaurs, with legs about 4.5 feet (1.4 meters) long and a body length of 19.6 feet (6 meters).

The fossilized footprints were “discovered more than half a century ago, around 200 meters (656 feet) deep underground, in a coal mine, just west of Brisbane,” according to the university.

“Unfortunately, earlier researchers could not directly access the footprint specimen for their study, instead relying on old drawings and photographs that lacked detail,” said Romilio. “It must have been quite a sight for the first miners in the 1960s to see big bird-like footprints jutting down from the ceiling.”

Hendrik Klein, a co-author of the study, said the footprints consisted of “water-sodden layers of ancient plant debris with the tracks later in-filled by silt and sand.”

He said this was why the footprints appear “in an upside-down position right above our heads.”

“After millions of years, the plant material turned into coal, which was extracted by the miners to reveal a ceiling of siltstone and sandstone, complete with the natural casts of dinosaur footprints,” said Klein, who is a fossil expert from the Saurierwelt Paläontologisches Museum (the Dinosaur World Palaeontological Museum) in the German capital of Berlin.

In 1964, geologists and experts from the Queensland Museum visited the closed mine to map the trackway and make plaster casts that are used in current research, according to the university.

“We made a virtual 3D model of the dinosaur footprint that was emailed to team members across the world to study,” said Klein.

“The more we looked at the footprint and toe impression shapes and proportions, the less they resembled tracks made by predatory dinosaurs. This monster dinosaur was definitely a much friendlier plant-eater.

“This is the earliest evidence we have for this type of dinosaur in Australia, marking a 50-million-year gap before the first [four-legged herbivore] fossils known.

“This is still a significant discovery, even if it isn’t a scary Triassic carnivore,” said Klein.