The newly discovered tombs in the necropolis had been disturbed by roadworks. 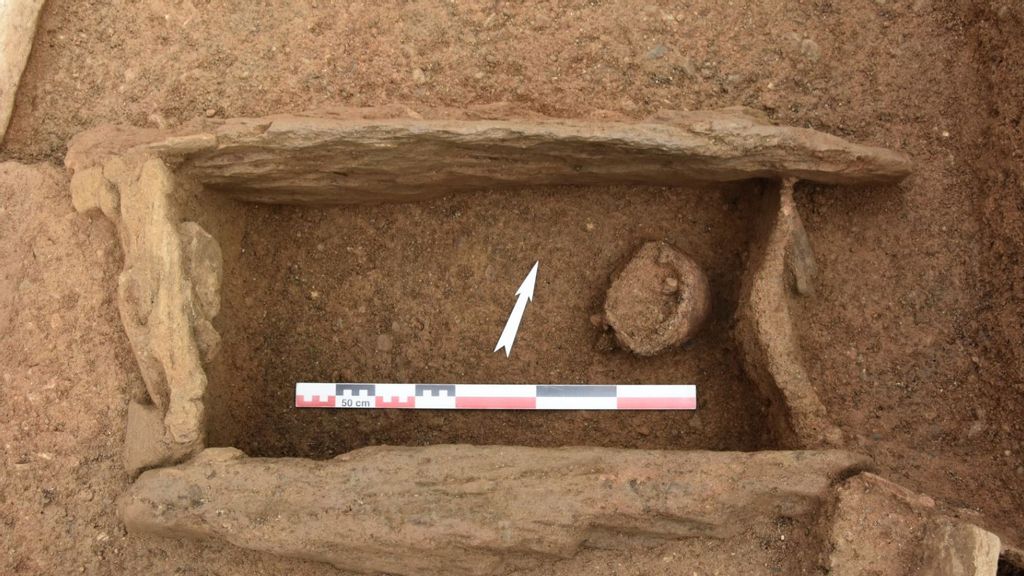 Tomb T5 with skull fragments in Chemin de Verney, Pully, Switzerland. Only three of the eight newly discovered tombs yielded skeletal remains due to damage from construction work in the area. (Kanton Waadt/Zenger)

Archeologists have unearthed eight prehistoric tombs, between 5,500 and 6,500 years old, in the heart of a Swiss town, but construction work has severely damaged three of them.

The site is the location of a famous necropolis in the Swiss town of Pully, which lies in the suburbs of the city of Lausanne in Vaud Canton, on the shores of Lake Geneva. The last discoveries reported in this district of Pully were made in 1984, according to state authorities.

A team of experts was sent in to check on the site while new construction work was underway in the area. They discovered eight new graves on Chemin de Verney Street dating back to the Neolithic period, between 4,500 and 3,500 B.C.

The necropolis stretches from Chemin de Verney Street to Chemin de Chamblandes Street and may extend even further. With the latest find, it is believed to house about 80 tombs.

The site was first discovered over a century ago by Swiss archeologist, historian and architect Albert Naef (1862–1936), a native of Lausanne.

The necropolis lies near the site of a previous discovery, in 1826, of 30 tombs dating back to the Neolithic period. Unfortunately, the artifacts from the Pierraz-Portay site were poorly preserved, so few of them remain.

“Archaeological monitoring of the work on Chemin de Verney, entrusted to the company Archeodunum SA, was carried out between 28th June and 17th August 2021,” Vaud Canton authorities said in a statement. “In an area of barely 10 square meters [about 108 square feet], eight vault tombs, made of molasse slabs, [were] unearthed.”

“Molasse” typically refers to sandstone, shale and other forms of stone that result from new mountain chains forming and rising. They are often found in the Alps and the Himalayas.

“They appeared at a shallow depth, and their cover slabs, which were very fragmented, were only very partially preserved. Two graves were intact in the center of the trench, the others having suffered damage caused by recent digging in connection with urban networks,” authorities said.

Only three tombs yielded skeletal remains, in the form of skulls, according to the statement.

Graves that weren’t likely to be affected by the construction work were “protected and left in situ.”

Vaud Canton authorities said the new sarcophagi represent a rare opportunity to complete the mapping of the necropolis, which still remains “difficult to fathom,” given the absence of “extensive, recent digs” at the site.

An earlier version of this article stated that the equivalent of 10 square meters was 32.8 square feet. It is in fact about 108 square feet. Zenger regrets the error.