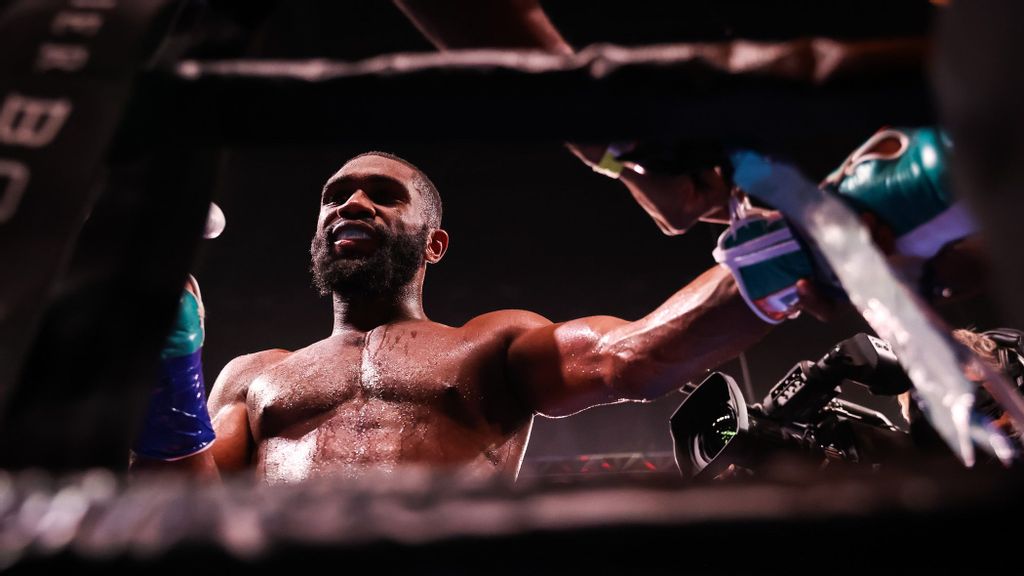 “I’m most definitely ‘The Now’ of the welterweight division,” said Jaron “Boots” Ennis in pursuit of his 18th straight stoppage victory against Thomas Dulorme on Oct. 30. (Amanda Westcott/Showtime)

But he was joking (mostly).

This time, Ennis was serious.

After that top five, Ennis said during an interview with Zenger on Wednesday, “you can throw [former champions] Keith Thurman and Danny Garcia and [WBA ‘regular’ champion] Jamal James in there.”

Standing 5-foot-10 with a 74-inch reach and an amalgam of speed, double-fisted power and finishing skills, the switch-hitting Ennis (27-0, 25 KO) will pursue his 18th straight knockout on Oct. 30 against Puerto Rican stalwart Thomas Dulorme (25-5-1, 16 KOs) at Mandalay Bay resort in Las Vegas.

“I’m like a wolf, and [Dulorme’s] like a turkey or a Cornish hen on Thanksgiving, which is right around the corner. I’m feeling really dangerous right now,” Ennis said. “I’m hungry, and after this next fight, I feel like a world title shot in 2022 is right there for me.”

If he is victorious over Dulorme, Ennis, if given his choice, would fight “Spence, [Crawford], Ugas, Porter or Keith Thurman,” in that order. “I’m not ‘The Future’ of the welterweight division; I’m most definitely ‘The Now’ of the welterweight division. Right now, I’m on a different level. I can’t wait to put on a show with a highlight-reel knockout.”

“Right now, I’m young, hungry and talented and I work hard,” Ennis said. “I’m a whole different animal than all of those other guys, and all I see is myself being victorious and coming home with a big knockout.”

“I’m looking forward to all of those battles, starting with guys like Boots and [Eimantas] Stanionis, so please let the madness commence,” said boxing analyst Ray Flores of Premier Boxing Champions, TGB Promotions and Triller. “I’m looking forward to Boots’ next fight, and, ultimately, seeing him challenging the current generation of the Spences, the Crawfords, the Porters and the Ugas’ of the world.”

Spence (27-0, 21 KOs) owns victories over Porter and Garcia, but is recovering from an eye injury that forced him to pull out of the clash with Pacquiao and to be replaced by Ugas.

James earned his crown in August 2020 by unanimous decision over Dulorme, a 31-year-old title challenger who was TKO’d in the sixth-round by Crawford in April 2015, lost a decision to Ugas in August 2017 and battled to a draw with two-division title winner Jessie Vargas in October 2018.

“I feel like I’m in the perfect position to showcase my talents in spectacular fashion,” Ennis said. “I wanna go in there, get a highlight-reel knockout, and then, one of those guys will have to see me. I’m not sure which one, but they’ll have to see me.”

Ennis’ last fight in April was a sixth-round KO of former champion Sergey Lipinets, who entered at 16-1-1 (12 KOs) and was knocked out for the first time in his career. Ennis both stopped Lipinets in his tracks and lifted him off his feet with a hybrid left-hook/uppercut that deposited him flat on his back as the referee waved an end to their bout.

“The uppercut is my favorite shot, along with the jab. Right now, those are my favorite punches to throw,” Ennis said. “I did it my way, having a lot of fun in there and showing the type of level that I’m on. My mindset is more technical.”

Lipinets was 3-0-1 (2 KOs) since being dethroned in March 2018 by Mikey Garcia, who earned his fourth crown in as many divisions with a unanimous decision victory. Lipinets had battled to a draw with unbeaten Custio Clayton in October 2020, which followed a 10th-round TKO in March 2019 over former champion Lamont Peterson, who retired after their fight.

“Jaron is a vicious punisher yet a classy finisher,” Flores said. “I truly love how much he continues to grow and evolve and believes in himself, and I believe that we’ll see that again against Dulorme.”

Dulorme’s last outing in April was a unanimous decision loss to Stanionis of Lithuania, who improved to 13-0 (9 KOs).

“I think in the Stanionis fight I demonstrated that I am still at the top level. A lot of people told me I won that fight, and I thought I did, too,” said Dulorme, whose previous bout before Stanionis was against James. “I’m excited to face Ennis because he’s a good fighter, but he hasn’t fought anyone like me.”

Before the Abreu fight, Ennis had scored first- and third-round knockouts in 2019 of Franklin Mamani (August) and Demian Daniel Fernandez (October) followed by a fourth-round TKO of Bakhtiyar Eyubov in January 2020. Fernandez entered at 12-1 (5 KOs), and Eyubov at 14-1 (12 KOs). Eyubov and Abreu were knocked out for the first time in their careers.

“If Jaron continues to do what he’s doing, believe me, he’ll be the headliner in Las Vegas for years to come,” Flores said. “There are some guys who are born to be prizefighters, and it’s great to be able to watch him grow.”

Born into a pugilistic legacy in boxing-rich Philadelphia, Pennsylvania, Ennis has been training in gyms since he was in diapers. He is trained by his father and manager, Derrick “Bozy” Ennis, who fought professionally before retiring in 1984 at 4-2 (3 KOs). Older siblings, Derek “Pooh” Ennis and Farah “The Quiet Storm” Ennis retired in 2014 and, 2015, respectively.

“My dad has me working on some new things to get better, having me be more relaxed, using my jab, going to the body a lot more, staying sharp and alert,” Ennis said. “I never look for the knockout. I just go in there and do what I’m supposed to do. I let the knockout come to me, which it usually does.”

“Jaron is really special. He’s a mesmerizing fighter with his movement in regard to how and when he throws,” Flores said. “When he boxes, it’s beautiful to watch. When he bangs, you’re almost waiting on the edge of your seat like, ‘This guy is going to throw a hammer at their head.’”

At 22-0 (20 KOs) while fighting between 141 and 151 pounds, Ennis had gone as far as four rounds seven times and six rounds twice, his route-going victories being a four-round unanimous decision over Eddie Diaz (September 2016), a sixth-round TKO of Marcus Beckford (December 2016) and a six-round unanimous decision over James Winchester (March 2017).

The 6-foot-1 Alvarez was 18-0 with 12 knockouts and stoppages in six of his previous seven fights before being dismantled by Ennis, who scored his 12th straight stoppage against Serrano, out-landing him 13-0 in jabs and 31-4 in power shots.

In succession, Ennis floored “Tito” Serrano with a right hook to the temple out of the southpaw stance, a right hand while orthodox, and, finally, a hybrid-uppercut-right hand along the ropes.

Ennis scored a combined seven knockdowns during his next four victories (all knockouts) to improve to 26-0 (24 KOs), including one each against Mamani Fernandez.