Thousands of others are relocated to a safe place by authorities in the Himalaya Valley. 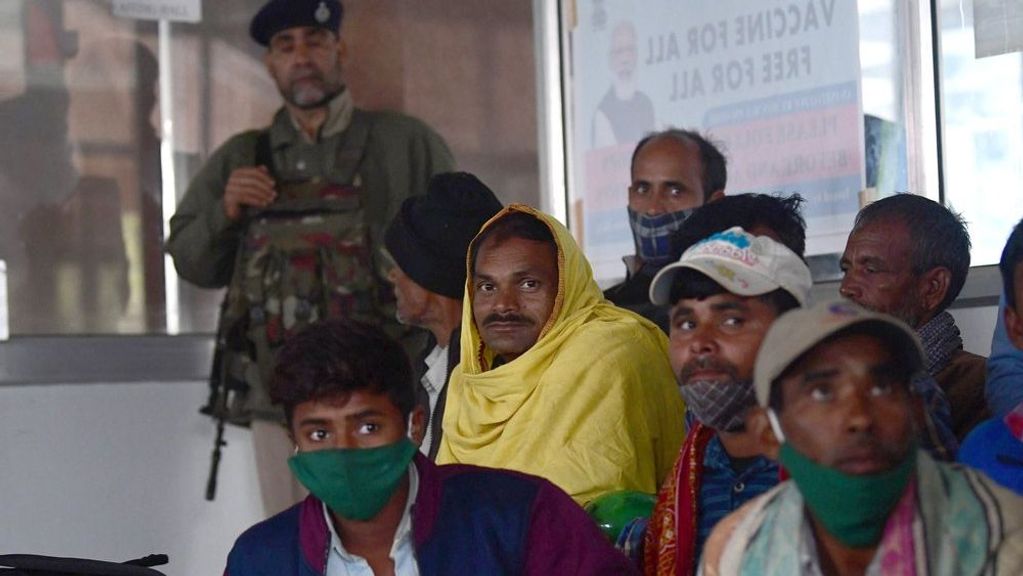 Migrant workers fled Kashmir this week after a series of Kashmiri militant attacks on migrants and other civlians. (Basit Zargar)

SRINAGAR, India — Hundreds of migrant workers in Kashmir are fleeing after recent deadly attacks by militants, who are fighting to separate the region from India.

Militants have killed 11 people, including five migrant workers, in Kashmir this month.

Kashmiri militants killed two migrant workers from the Indian state of Bihar, both Hindus, and injured another person in South Kashmir’s Kulgam district on Oct. 17. The attack came a day after militants shot and killed two migrant workers, a Hindu and a Muslim from Bihar and Uttar Pradesh. The series of attacks in Kashmir began Oct. 5 when militants killed a Hindu street vendor from Bihar.

A group of migrant workers gathered at the Srinagar Railway Station on Oct. 18 to board trains back home to their native states.

Dinesh Manda from Bhagalpur in Bihar was among the scores leaving Kashmir. For the last 40 years Mandal has been coming to Kashmir every summer to sell ice cream. He said that since the attacks on civilians, he is scared.

“The situation is bad,” he said. “Non-locals are being targeted. Vendors and laborers are being fired upon by militants. We cannot live in Kashmir in such conditions.”

Satish Kumar, another ice cream seller, said the situation is alarming, leaving them with no choice but to leave Kashmir.

“Everybody is scared,” Kumar said. “Earlier vendors were targeted on the roads, but now people are being attacked in their rooms. We have decided to leave after two non-local persons were killed in Kulgam.”

Migrant workers in the Himalaya Valley say their families back home are scared after hearing the news of the attacks and are urging them to return. Those heading home said they are unsure whether they will return to Kashmir.

Migrant workers have participated in Kashmir’s economy for decades, working mostly as construction workers and street vendors. Some have set up stalls selling tea, food and other provisions across Kashmir. An estimated 50,000 migrant workers live seasonally in Kashmir.

After the recent attacks, police helped move hundreds to safer locations in the region. But the majority of migrant workers have fled Kashmir.

Not everyone has shut their shops yet, even though many migrants said they want to wind up their business soon and leave. Among those are a group of 20 vendors from Bihar selling hazelnuts in Srinagar.

Deepak Kumar (not related to Satish), who said he earns $8 a day selling hazelnuts, came to Kashmir three months ago. He and his colleagues have decided to return to Bihar after the latest killings.

“There is a lot of fear in Kashmir,” he said. “I want to sell the remaining hazelnuts and go back to Bihar.”

Udit Kumar (not related to Deepak or Satish) from Bihar came to Kashmir 10 days ago. The street vendor said he will return to Bihar on Nov. 1. Kumar said saving his life despite —not earning a livelihood — is his priority now. The government can’t provide security for all, he said, and that’s another reason that vendors like him have decided to move out.

“After the spiraling violence in Kashmir I want to go back home,” he said. “Although general security arrangements have been made by the government, every migrant worker can’t be provided security.”

Babloo Kumar Yadav was without work during the COVID-19 lockdown at his home in Bihar. This street vendor came to Kashmir two months ago. But his family back home has been constantly calling him and asking him to return. Yadav has been coming to Kashmir for the last four years but has never been as fearful.

“Everybody is worried after the killings, anybody can be targeted,” he said. “Our families back home are telling us to return soon. They watch the happenings on TV.

“We have never seen non-natives being targeted, this is happening for the first time.”

Some with more roots in the region are determined to stay. Pawan Paswan’s brother Virendra was killed by militants, but the street vendor said he has no plans to leave Kashmir. He has lived with his family there and worked there for the last 27 years.

“If I leave due to fear and stop working, how will I feed my family?” he said. “Local people are very good, I have spent most of my life in Kashmir, my beard has turned gray now. Leaving Kashmir is not an option.”

«Previous Post
Not A Leg To Stand On: US Army Vet Caught Faking Paralysis To Get $1 Million In Payoffs»Next Post
VIDEO: Testing The West: China And Russia Send First Warship Flotilla Into The Pacific