Women’s spirits are lifted when they can take restore their appearance after tough medical procedures. 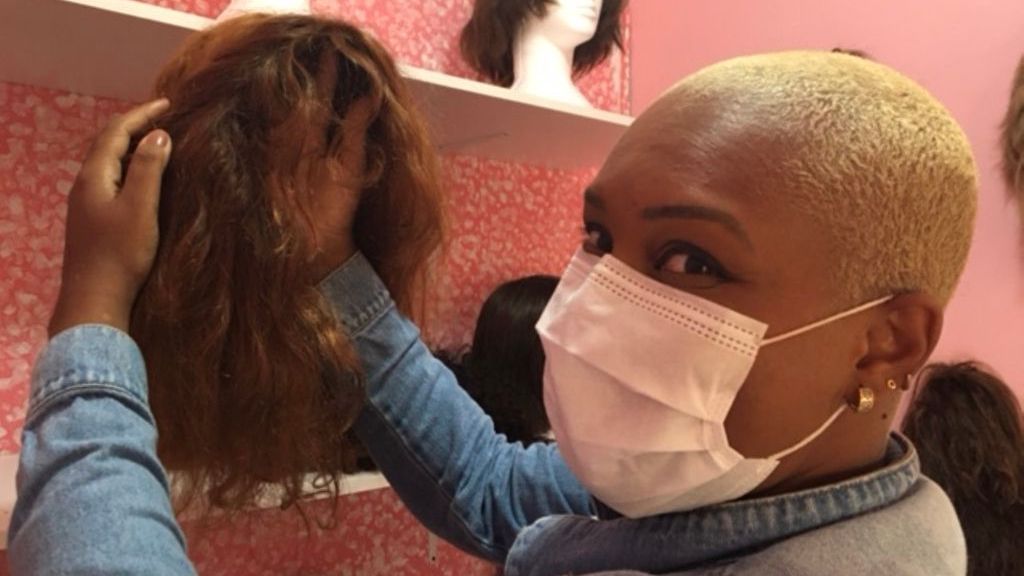 Chemotherapy meant the loss of hair for Cátia da Motta. A beautiful wig helped restore her self-esteem. The Wig Bank hopes to help with that. (Luciano Nagel/Zenger)

MONTENEGRO, Brasil — In Brazil, breast cancer is the second-most-common disease in women, after skin cancer. This illness can cause emotional and psychological harm, as well as physical pain.

To help patients, a space has been created that offers cuts and styling, natural-hair wigs and other hair products. The idea is to boost a woman’s self-esteem during the critical treatment phase, which can include surgeries, chemo and radiation, and often, complete hair loss.

The Association to Support People with Cancer (Aapecan), in Bento Gonçalves, works with the Ministry of Housing, Social Development and Citizenship (SMHAD) in Montenegro, in Vale do Caí, Río Grande do Sul, on this project. The free voluntary service benefits more than 30 women in the town of Montenegro and neighboring areas.

For many cancer patients, the most dreaded physical change is hair loss.

“When you hear the diagnosis, the doctor warns you that hair loss is the most difficult moment. It’s not just hair; it’s a woman’s vanity that is lost. You lose your self-esteem; you don’t feel like the same person, and you seem to lose your identity. Here at the Wig Bank, they took me in, and when I put on a wig, I felt like I was Jucilaine again, with better self-esteem,” said Jucilaine Miguel Lamberte.

Vinícius Nascimento Mieznikowski, communications advisor for Aapecan, said: “In April of this year, we contacted the authorities in the city of Montenegro and sold them the idea of setting up a Wig Bank in the town. Our goal is to expand to even more cities in Río Grande do Sul. Today, Aapecan is in 14 towns and in Bento Gonçalves, in the mountain region.”

Lamberte says she found out five months ago she has cancer in her left breast, called metaplastic carcinoma. Today, she is taking chemotherapy to reduce the size of the tumor.

This type of cancer is rare (fewer than 1 percent of invasive carcinomas), but those who catch it in the early phase and get treated have a good chance of being cured and suffering fewer side effects.

Lamberte says she found the tumor during a self-exam at home with a mirror. “It’s very important to do this exam, which is simple. The sooner you find it, the faster the treatment and the odds of being cured. Women should be aware that this illness does not only affect older people; younger women can also get breast cancer,” said Lamberte, who now wears wigs and turbans from Aapecan in Montenegro.

Cátia da Motta agrees. Two years ago, she was diagnosed with cancer in her right breast. She underwent long chemo sessions and had a mastectomy to remove both breasts. “Since I had the surgery, I’ve been working on my social-media sites to raise awareness and help women with this disease. It’s great to know there is someone who donates part of themselves (a lock of hair for example) to make somebody else happy and save a life,” she said.

María Isabel Marqués de Oliveira, a retiree, says she is proud to be the first woman in the city of Montenegro to donate her hair. A few months ago, she cut her long locks to make the first donation to the Wig Bank.

“In July, my 50-year-old sister was diagnosed with uterine cancer. I was very scared. That month, she told me that if her hair fell out during the chemo, she didn’t want fake hair. She wanted a wig with natural hair. That’s when I decided to donate, and I found out about the Wig Bank project run by the town of Montenegro, together with Aapecan. I donated my hair to my sister,” she said.

Marqués de Oliveira remembers her sister was very depressed when she first wore the wig, but little by little, she came to accept it and faced her illness. “She was hesitant at first, especially with hair that wasn’t hers, But with all the care and support from the Aapecan team, my sister began to accept it. I’m so happy I could help her, and I’m looking for more hair for women who need it,” said Marqués de Oliveira.

Caring for the wigs

Claudovico da Silva works with wigs and is an “ambassador” with the brand Mix Use, which specializes in cosmetics for beauty salons. He is one of the volunteers who help patients with their look, aiding women in their search for the wig that best compliments their faces. He treats and styles the wigs with vegan oils, to give them better color and shine.

“Hair is important to women; it’s like a frame for their face. Losing hair to illness can affect the patient psychologically,” he said.

The director of Social Assistance of the SMHAD, Calinae Pinheiro, says the city’s new Wig Bank “strengthens” women who are going through a difficult time in their lives. “Here, we also offer psychological treatment and all the support they need to feel good,” she said.

The municipal minister of SMHAD Montenegro, Luis Fernando Ferreira, says it is important for women to participate in hair donation. “This simple act can help save lives, and this project will definitely cross boundaries,” he said.

The Brazilian National Cancer Institute (INCA), which works with the Ministry of Health, estimates 66,280 new breast cancer cases in Brazil for this year, which represents 43.7 cases per 100,000 women.