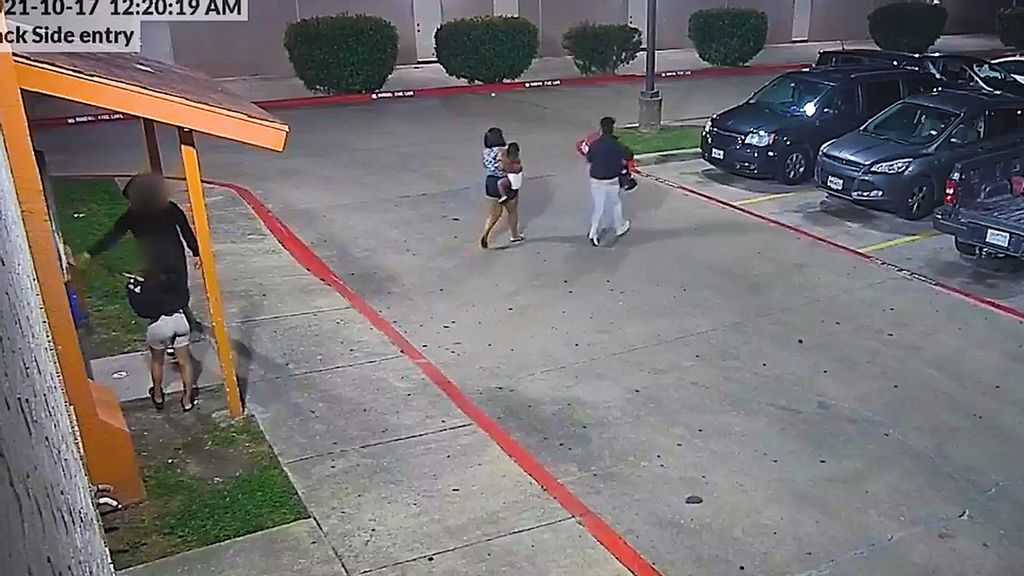 Female suspects accused of kidnapping a toddler are captured on video from a surveillance camera in a motel parking lot on Oct. 17 in Garland, Texas. (Garland Police Department/Zenger)

Police in Texas have arrested a woman involved in kidnapping a toddler and are searching for two suspected accomplices.

The baby boy and his mother were in a motel room when the mother heard a knock at the door, police said. “Investigators believe the mother opened the door thinking it was a friend. Three women rushed inside the room and immediately overpowered the mother and took her child.

“Moments later, the women are seen exiting the same door carrying the infant and running to the SUV. The mother chased after them and was able to remove the front license plate from the kidnappers’ vehicle before they were able to flee the parking lot.”

In a statement posted on Facebook on Oct. 19, police said: “The responding officers identified the SUV as a black Jeep Renegade from the license plate the mother obtained. Officers immediately began checking the area and one Garland officer observed the SUV driving on Northwest Highway near LBJ Freeway just inside Dallas.

“Officers conducted a traffic stop on the vehicle and observed that it was occupied by a woman driver, an 11-year-old juvenile, and the kidnapped infant. The infant was unharmed and safely returned to his mother.”

Lashonda Price, 34, of Seagoville was arrested on Oct. 19 and taken to Dallas County Jail. Bond was set at $20,000. It was not known at the time of this report whether she met bail.

Neither the relationship of the 11-year-old to the suspect nor the juvenile’s identity was reported.

“Detectives identified one of the other women as 28-year-old Romeisha Brown but have not identified the third. An arrest warrant for kidnapping has been obtained for Brown,” said police, who released a photo of Brown. “The third suspect is described as a white female.

“Investigators believe this to be an isolated-targeted incident where the involved suspects knew the victim. This is still an active investigation.”

Detectives are asking if anyone has information on the whereabouts of Brown, and the identity of the third woman, to call the Garland Police Department or to anonymously call CrimeStoppers.