“The Marine Corps taught me not to [mess] around,” the veteran said. 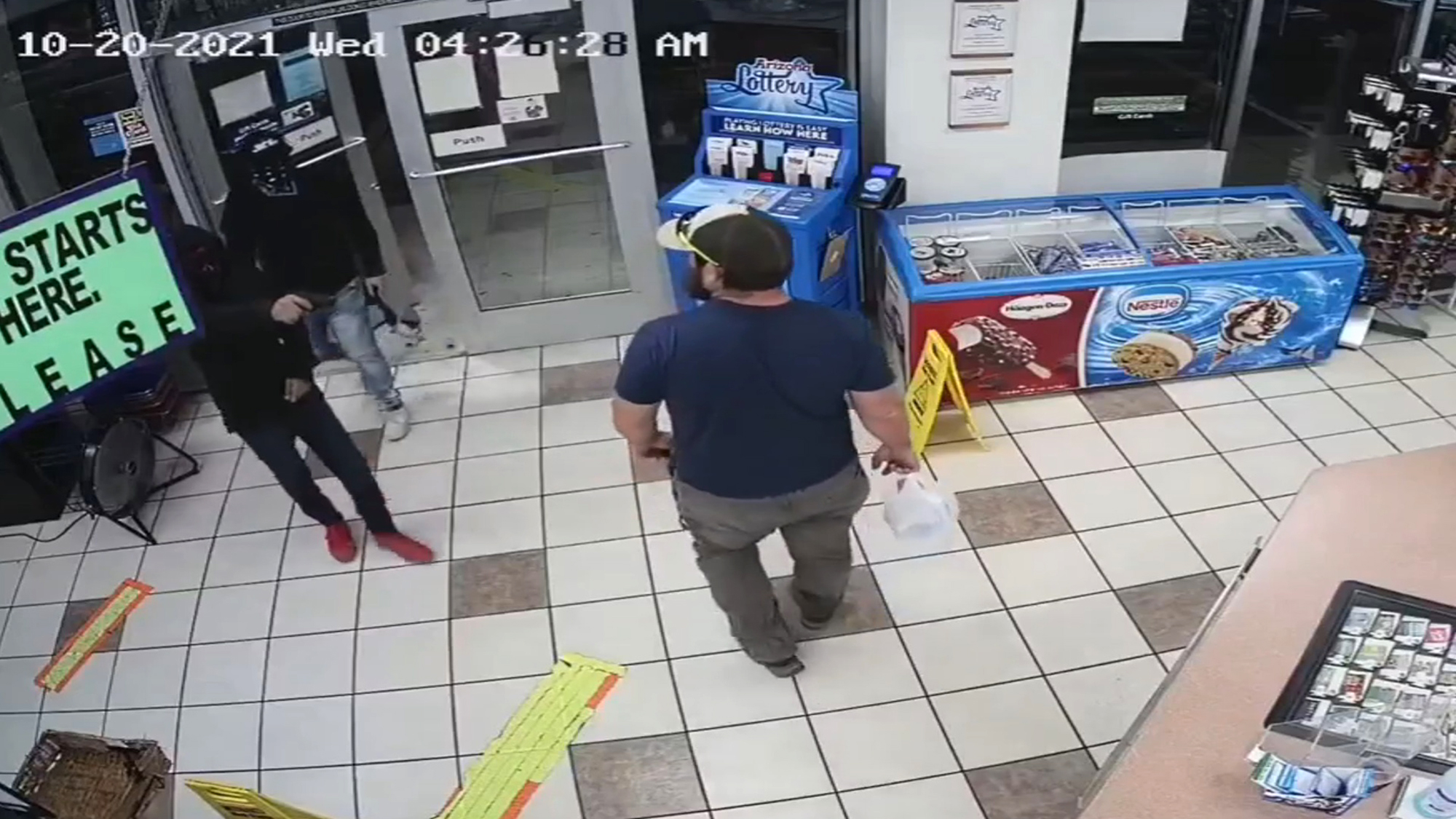 In this screenshot from CCTV, the former Marine (right), who was not identified, in a matter of seconds disarmed and took down the gun-wielding robber to his left, in Yuma, Arizon, on Oct. 20. (Yuma County Sheriff's Office/Zenger)

In a matter of seconds, a former Marine who was a customer inside a gas station convenience store disarmed and took down a man who entered wielding a gun.

Though the man was pointing the gun at someone else, the Marine’s response was quick. A second man who entered at the same time as the man with the gun fled out the door.

The former Marine is not identified.

The Oct. 20 incident, which went viral, was captured on the closed-circuit TV at a store in Yuma, Arizona.

Sheriff’s deputies responded to a report of an armed robbery at about 4:30 a.m., the Yuma County Sheriff’s Office said.

“Upon arrival, deputies learned of three suspects entering the Chevron [store], one of them armed with a handgun. The armed suspect walked next to a store customer while pointing the weapon toward the cashier when the customer acted immediately and disarmed him.

“The other two suspects fled the area when they witnessed their fellow criminal stopped. The customer was able to detain the suspect he disarmed until law enforcement arrived.

“The suspect detained during the incident was a juvenile and was booked into the Yuma County Juvenile Justice Center for one count of armed robbery and one count of aggravated assault. The other two suspects are still currently outstanding,” the sheriff’s office said.

No injuries were reported by any of the victims, the sheriff’s office said.

“When deputies contacted the customer, who previously served in the United States Marine Corps, and asked how he was able to take control of the situation, he stated, ‘The Marine Corps taught me not to [mess] around,’” the sheriff’s office said.

The CCTV footage shows the former Marine, a customer, waiting inside the store. The door opens and two robbers, one armed with a gun, enter. A third suspect can be seen lingering by the door outside.

The armed robber has his weapon raised when, after a second or two, the former Marine knocks the gun away and takes down the suspect.

The video was posted on Facebook by the sheriff’s office and has gone viral there and on other social media platforms.

The sheriff’s office asked that anyone with information regarding the case to contact the Yuma County Sheriff’s Office by phone or to submit a tip anonymously at www.yumacountysheriff.org.