The alligator’s aggressive behavior was a threat to other alligators and zookeepers. 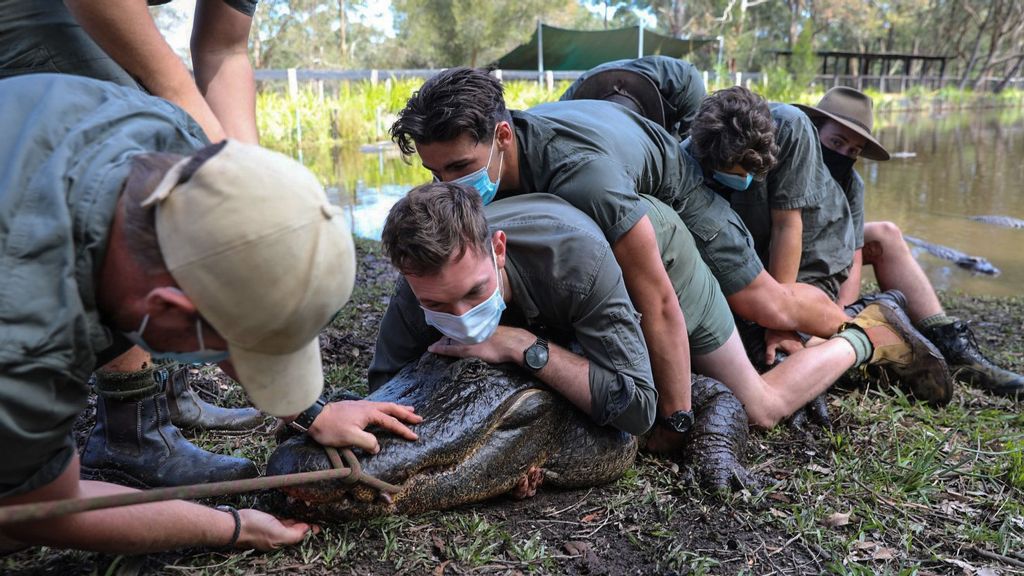 Australian zookeepers just removed an alligator called Kanye from the lagoon it shares with 54 others after it grew aggressive during the mating season.

The bad-boy alligator was captured at its home lagoon in the Australian Reptile Park, which boasts the largest population of American alligators in Australia.

The reptile started acting aggressively when the warm weather kicked in and mating season began. Males roar to attract females and to keep other males away. Mating usually occurs in early May.

“However, Kanye has come out of hibernation explosive, therefore, a danger to himself, to the other alligators and staff,” said park director Tim Faulkner. Kanye weighs around 881 pounds and is nearly 13 feet long.

It took a skilled team of more than 12 keepers to locate and catch Kanye in the lagoon. “He was then transported to an isolation area, where he will spend a month or so calming down,” the Australian Reptile Park said.

Twenty new alligators were introduced to the park in March, already home to 45 adult alligators. However, Kanye had recently started to charge at zookeepers, according to the park.

“Ours is normally a very quiet lagoon, with no major altercations taking place. We even saw this earlier this year, when we added the 20 males to our lagoon,” said Faulkner.

“Kanye has made the other alligators very tense,” the park said. “He’s a young bloke, full of testosterone, and he’s raising havoc right now. So the best thing to do is to send him to the naughty corner for some quiet time out.

“American alligators have one of the strongest jaw pressures of any animal and one bite can be life-threatening, so our amazing team had to take extreme care during the removal. It’s hoped that Kanye will return to the lagoon once the peak breeding season has ceased, and his hormone levels have returned to normal.”

Now that the park has reopened following COVID-19 restrictions, it encourages visitors to view the alligators “being fed in all their prehistoric glory during the spectacular alligator feedings that take place on weekends.”

Alligators have between 74 and 80 teeth in their mouth at a time and their strong jaws can crack a turtle shell.

The American alligator is native to the southeastern United States and is bigger than the only other alligator species, the Chinese alligator.

After mating in May, around late June and early July, the female lays 35 to 50 eggs, which hatch after a 65-day incubation period. The temperature of the nest determines the sex of the young, according to the Smithsonian National Zoo.

American alligators live about 50 years in the wild.