Hindus burned a church and are assaulting Christians who practice their faith. 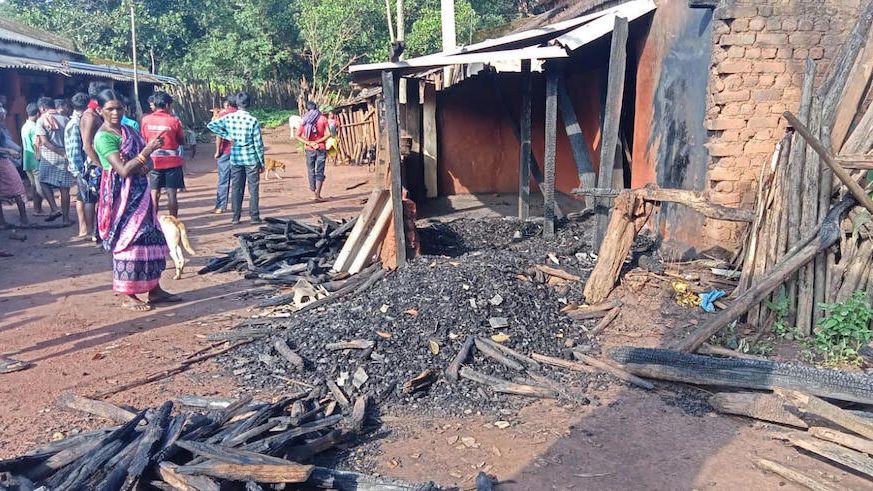 Villagers walk by the damage from an arson attack on a pastor’s home that doubled as a worship space for local Christians in Kandhamal, Odisha, East India. (Courtesy Birendra Singh)

The house of Goura Digal, a resident of the Lodamila village in Kandhamal, Odisha, was set on fire by a mob of about 25 people on Sept. 22. The house doubled as a place of worship for local Christians.

At around 10 p.m., men came shouting Hindu slogans of “Jai Shri Ram” (Hail Lord Ram). Someone carrying a homemade pistol fired gun shots before setting the house on fire, said a Christian witness, who was not named to protect their identity.

In total, 27 people, including 14 children, have fled their homes since Sep. 19 and settled in a new undisclosed location, one of the displaced persons said.

Since Sept. 17, Hindu villagers have tried to force the Christians to flee, another said. They were assaulted and ostracized from the village for not converting to Hinduism, and their homes were vandalized — one set on fire — and their Bibles torn, one of the Christians reported.

These families have faced severe opposition for their Christian faith since surviving a massacre in 2008, in which Hindu extremists killed more than 100 people. Over a three-month period, more than 300 churches and 6,000 homes across Kandhamal District were ransacked and destroyed. An estimated 56,000 people migrated in fear of their lives.

Pastor Birendra Singh, a resident of the village Kurtamgarh and the pastor of these families since 2011, went to the Balliguda police station on Sept. 20 and submitted a written complaint detailing the atrocities of the villagers against the Christians.

Singh said the police would not register a formal complaint — called a First Information Report — until they had investigated. When Singh returned the next day and the day after that, the police still refused to register a report, he said.

Bishop P.R. Parichha, state president of All India Christian Council, is pressing the government to respond.

“I have sent representation to the District Collector and copies to high-level government officials — like Home Secretary, DIG (Deputy Inspector General of Police) and others for urgent action against the religious fanatics on Sept. 28. We are waiting for their response,” Parichha said.

He also wrote to the Odisha Human Rights Commission on Sept. 30 to look into the matter and provide compensation for the property lost and costs imposed on the Christians forced to leave.

“We have not forgotten the 2008 Kandhamal persecution. … Once again, it is happening,” Parichha said.

Aftermath of the Kandhamal violence

Terrified by the 2008 violence they survived, these families resorted to secretly practicing their Christian faith for three years, Singh said. In 2011, they began to meet and worship in Digal’s house.

“As the fellowshipped and increased in the Word of God, their faith became stronger, and they were able to sustain daily oppositions from the villagers,” Singh said. “In 2016, the villagers got together and ostracized these four families. They were not allowed to fetch water from the wells in the village, talk to any non-Christian, work on their land or buy or sell vegetables.”

On Sept. 17, two Christian women went to fetch water from a man who offered them his personal well. Some villagers attacked the women, spilling their water and tearing their sarees, Singh said.

The next morning, a group of villagers arrived at the houses of Christians and vandalized them, threatening the Christians to leave the village or become Hindus. The villagers told the Christians not to fetch water from any Hindu well because the wells are in a Hindu nation and belong to Hindus, one resident said.

On Sept. 19, when the Christians met for Sunday prayer at Digal’s house, some villagers entered the house and tore the Bibles. Then they locked two Christian families inside the house and assaulted them.

“The Christians were asked to flee for their lives if they did not want to be killed,” Singh said.

On Sept. 19, two families relocated and took shelter in a Christian home several miles away, while two other families sheltered and hid in the nearby jungle. But during the night, they returned to their homes and cared for their cattle, and some Hindu villagers noticed.

On Sept. 22, the villagers gathered for a meeting and then burned Digal’s home. Digal’s family heard the villagers as they approached the house and fled into the jungle before their home was set on fire.

Though there were about 25 people involved, Singh said only 11 of them were identified by the Christians.

The Balliguda police called for a peace committee on Sept. 25 and invited the Christians and few representatives from the village, but it reached no conclusion, said Singh, who attended the meeting. Singh has been receiving constant threats over the phone for supporting the Christians in their attempt to bring the perpetrators to justice.

Singh, along with the five families, submitted a memorandum demanding action to the superintendent of police on Oct. 5. At the time of this report, no action has been taken. Singh said the police refuse to take the responsibility of providing protection to the Christians if they decide to go back.