Adults keep a watchful eye over the 2-month-old babies as they emerge from the safety of their zoo den. 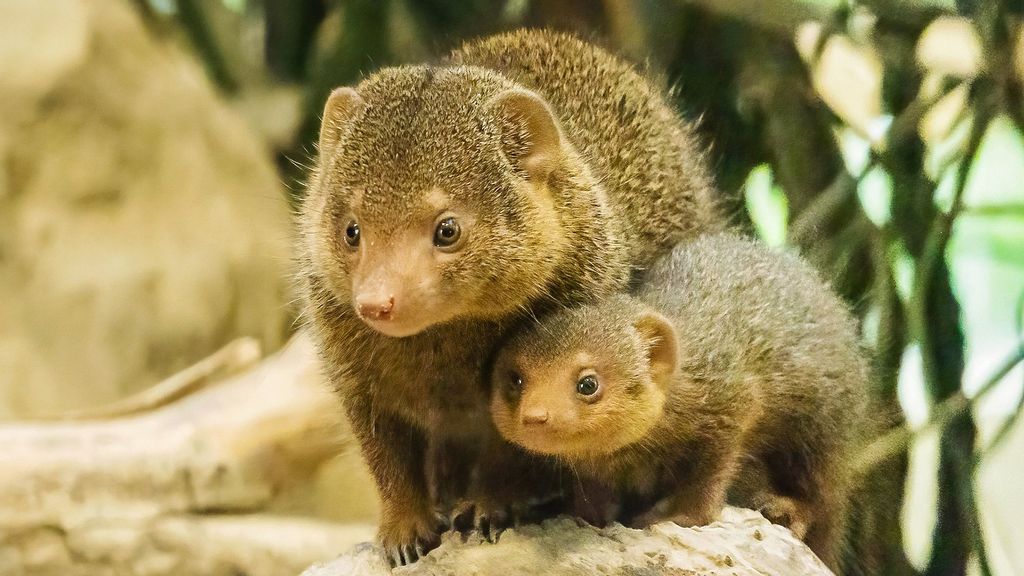 One of the three common dwarf mongoose offspring born in the Schonbrunn Zoo in Vienna, Austria, in September, alongside its mother. (Daniel Zupanc/Zenger)

Three adorable dwarf mongooses make one of their first excursions out of their den.

The Southern dwarf mongooses were born in mid-September at the Tiergarten Schonbrunn zoo in Vienna, Austria.

In the footage, the nearly 2-month-old mongooses play with each other, crawl over small mounds and climb branches, as their mother keeps a watchful eye.

Stephan Hering-Hagenbeck, the zoo director, said Oct. 20: “The young animals are curious. They explore the facility, dig in the sand and play with each other. If one of the little ones moves too far, the adult animals carry it back into the protective burrow in their mouths.”

The southern dwarf mongoose is among the smallest of its species, weighing less than a pound. It is recognized by its large pointy head, a long tail, short limbs and long claws.

These mongooses are native to the savannahs of eastern and Southern Africa. Their fur coat can vary in color, ranging from a dark brown to a yellowish red.

Mongooses like to colonize abandoned termite mounds, which gives them protection at night and a good view of the surrounding area during the day, according to the Schonbrunn Zoo.

They feed primarily on insects and have a complex social system. They rely heavily on teamwork to survive and guard their territory. Usually, only the group’s dominant female becomes pregnant; she is responsible for 80 percent of the pups reared by the group.

In the wild, a group of dwarf mongooses would usually take control of around 74 to 84 acres of land. The species is social and lives in extended family groups of two to 30 animals. They communicate via whistles, trills and vibrations.

Hering-Hagenbeck said: “Pygmy mongooses live socially in small groups and rely on teamwork when they live together. Only the highest-ranking female gets the offspring, but everyone helps with the rearing.”

The sex of the pups in the footage is not yet known. After the gestation period, 53 days, the newborns remain below ground within a termite mound for the first two-to-three weeks. For the first seven weeks of their life, they are suckled. The zoo pups are slowly starting to eat more solid foods, such as grasshoppers, mealworms and minced meat.

The International Union for Conservation of Nature (IUCN) does not consider the mongooses to be at risk of extinction and has ranked them as a “least concern” species.

«Previous Post
Are We Yearly There Yet? One Of World’s Oldest Atlas Books Up For Auction»Next Post
Mounting Lion: Confused Cougar Trapped Up Tree In Suburban Condo Complex